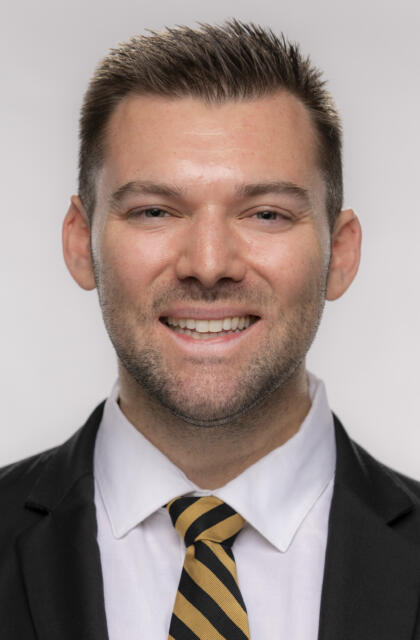 Brooks Webb took over as the general manager and chief of staff for the Vanderbilt baseball program in the spring of 2021 after spending the previous four seasons as the Commodore’s director of baseball operations.

The 2022 season marks Webb’s sixth on West End, as he oversees numerous initiatives and functions for the national power baseball program. Webb serves as the direct connection to all external departments on campus, inclusive of communications/social media, marketing, video/digital, licensing, facilities and ticketing among others.

Within this lead support staff role, he sets and manages the general branding and messaging of the VandyBoys program and the student-athlete experience. Since his arrival, the baseball social media channels have experienced unprecedented growth, leading the nation in overall interactions in 2019, 2020 and 2021.

This included building a social/creative team to best tell the story of the program, as well as driving the vision behind the story, including the launch of the program’s Instagram account in 2018, which has ascended to the most followed account in college baseball as of 2022. Since 2020, the program has also established an official Facebook and TikTok page.

During his tenure, Webb led the creation of the “eVerythingU” campaign, highlighting the holistic story of the program and its rich history, helped form the “David Williams Fall Classic” honoring the late Vanderbilt vice chancellor for athletics while promoting diversity and inclusion within baseball, and instituted an on-field team partnership with Memories of Honor, a nonprofit focused on honoring the lives of our fallen military.

Webb also engineered the design of VandyBoys.com, the official online home of Vanderbilt Baseball, as well as guiding innovative facility projects within Hawkins Field and the Player Development Center, while continuously working with administration to implement fan engagement enhancements. He also assists the coaching staff with recruiting, leads alumni relations, manages the game schedule and contracts, and serves as the contact for the Champions’ Circle National Commodore Club excellence fund.

In November of 2019, Webb was one of 10 from Division 1 baseball named to the TeamWorks Baseball/Softball Leadership Committee, which united some of the best and brightest of NCAA Division I baseball and softball operations and coaching, discussing and developing strategies to engage and empower current and future student-athletes, while collaborating on best practices to deliver a world-class experience on and off the field.

Prior to joining the Vanderbilt staff, Webb spent five years with USA Baseball. During his time with the national governing body, he led Team USA’s 15U National Team to two gold medal finishes internationally, including the program’s first-ever gold medal in 2013 defeating Cuba at the Pan American Championships in Barranquilla, Colombia.

As General Manager, Webb helped develop 23 players drafted in the top five rounds of the 2016-2021 MLB Draft, including back to back No. 1 overall picks from the 15U National Team (Mickey Moniak and Royce Lewis), another first for the youth program.

Nine players have been selected in the first round alone, along with five players in the top five picks overall, including Vanderbilt’s Austin Martin, who played for Webb in 2014.

He was promoted to Senior Director, Baseball Operations for the organization in 2015.  In this newly created role, he spearheaded a reorganization of the baseball operations department, streamlining both scouting and event processes, along with hiring National Team coaches, support staff and operational personnel.

Under his guidance, he led the player scouting/evaluation, recruiting and operational efforts for USA Baseball’s 15U National Team, 14U National Team Development Program, and National Team Championships, the organization’s largest operating event while conceptualizing many on and off the field strategies still utilized by USA Baseball today.

He and his wife Lauren live in Nashville.