The Commodores are scheduled to resume competition Feb. 12 and play through April until heading to the Southeastern Conference Championship at the end of that month in Georgia.

Vandy is coming off a three-tournament fall in which it won the Vanderbilt Legends Collegiate, finished second at the Jerry Pate National Intercollegiate and came in fifth at the Blessings Collegiate Invitational.

“This fall really provided our team a great opportunity to get back to a sense of normalcy by competing and doing it in a safe environment,” Vanderbilt head coach Scott Limbaugh said. “Our guys were so thankful and handled the situation on and off the course with a very high care level. The spring will be much the same and we are once again very thankful that the SEC is helping to provide us with another opportunity to compete this spring in a safe and controlled environment.”

A closer look 👀 at where @VandyMGolf will be competing this spring.#AnchorDown

Vanderbilt is scheduled to make its 2021 debut Feb. 12-14 at the Gators Invitational in Gainesville, Florida. That tournament will be the first event without former Commodore standout John Augenstein who turned to professional golf in November.

Two weeks later the Commodores will head to Baton Rouge to take part in the LSU Invitational on Feb. 26-28.

The month of March includes a trip to Auburn, Alabama for the Tiger Invitational (March 15-17) and the Old Waverly Collegiate (March 26-28). Vandy will wrap up the regular season April 5-7 at the Shoal Creek Invitational in Birmingham, Alabama.

“We believe this spring schedule will help prepare us for championship season by giving our student-athletes a chance to play against the very best competition each time out,” Limbaugh said. “I’m excited to go back to some tournaments we have been to before such as the Gator, Old Waverly and Shoal Creek and also excited to go to a couple of new courses at LSU and Auburn.

“I’m sad that we won’t be hosting the Mason Rudolph Championship this spring, but thankful we were able to host in the fall and we look forward to hosting the Mason again next season. We are hosting the NCAA Regional at The Golf Club of Tennessee in May and that will be really special to host at such a prestigious club where we have so much support.”

After the SEC Championship on April 21-25 on Sea Island, Georgia, Vanderbilt will welcome some of the best golfers in the country to an NCAA Regional in Kingston Springs. Should the Dores fare well that week they’ll advance to the NCAA Championship in Scottsdale, Arizona.

The Commodores didn’t get that chance earlier this spring due to the COVID-19 pandemic. But they hope the momentum they ended the fall with carries over as the calendar turns to a new year.

“Our team took some great steps this fall and I thought we played with a lot of consistency. There is also a lot of room for improvement this offseason and that has to be our focus as we try to become the team we know we can be,” Limbaugh said. “We cannot be satisfied with where we are because success is about consistency and doing it over time. Our team needs guys that want to step up.

“Our hope is that guys can make improvements this offseason so when their time comes in the spring they will be ready to help the team.” 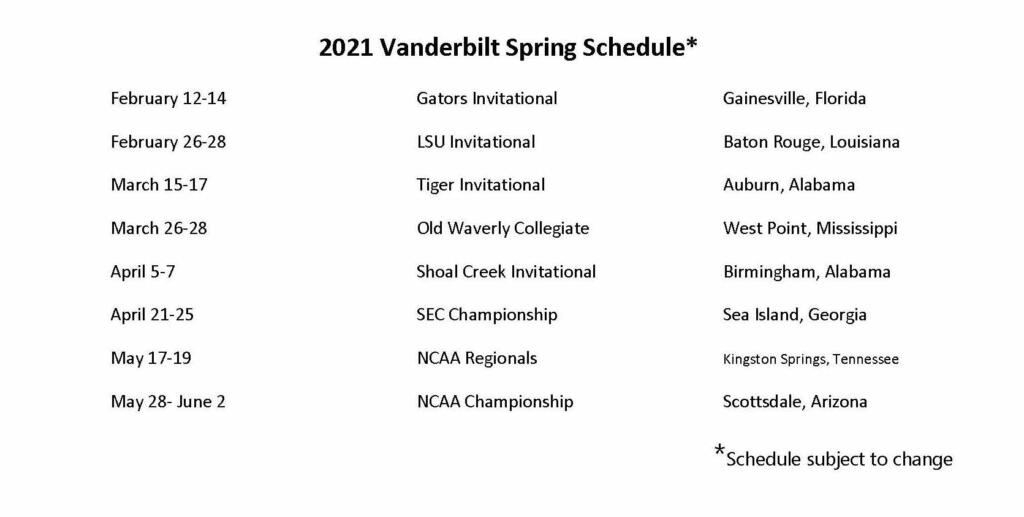