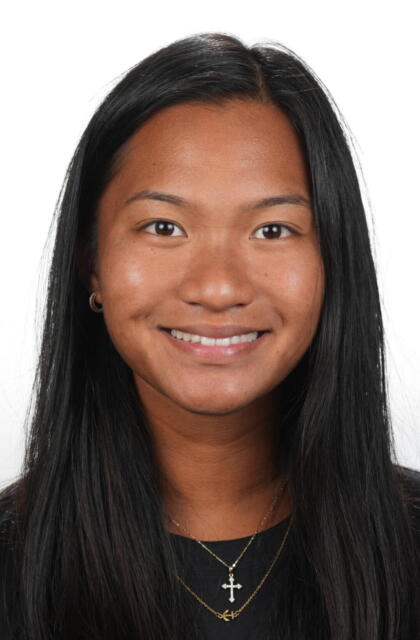 As a Junior (2021-22)
• Went 23-15 overall record in singles play
• 19-19 overall record in doubles play
• Played primarily at No. 4 singles and went undefeated in three contests on Court 3
• Registered two match-clinching points, including in the first round of the ITA Kickoff against San Diego (Jan. 28, 2022)
• Went 13-9 in duals (singles), including a ranked win over No. 86 Elise Mills of South Carolina
• With partner Anessa Lee, played primarily No. 2 doubles and went 4-6

As a Sophomore (2020-21)
• 16-10 overall record in singles play
• 18-12 overall record in doubles play
• Played primarily at Nos. 5 and 6 singles and No. 2 doubles primarily with Emma Kurtz
• Reached as high as No. 46 in the ITA doubles rankings with Kurtz
• Went 13-5 in dual-match singles play
• Clinched four victories for the team, including three in a row against Louisville, No. 9 Georgia Tech and No. 21 Auburn
• Posted a 15-6 mark in doubles play, going 7-4 against SEC foes
• Opened the dual-match season winning each of her first nine decisions, all in straight sets
• Started Vanderbilt’s comeback against No. 31 Kentucky with a 6-3, 5-7, 6-3 win over Elizabeth Stevens and was named SEC Newcomer of the Week for her efforts
• Went 13-6 with Kurtz in doubles play, winning both of their NCAA Tournament matches
• Clinched doubles points for the Commodores on five occasions
• Was named to the SEC All-Newcomer team, honoring sophomores that had their 2019-20 freshman campaigns cut short by COVID-19

The Cruz File
• Highest National Ranking: 17
• Five-star recruit
• Doubles Champions of USTA National Women’s Open Indoor Championship with fellow Vanderbilt partner Rosca
• Semifinals of PTC Clay Court Championships Women’s Open Singles
• Quarterfinals of USTA National Level 3: The Georgia Bowl
• 2016 All-American Strength and Conditioning Athlete of the Year
• Describes the way she competes as relentless
• Favorite things to do away from the tennis court are listen to music, read and be with family and friends
• Favorite aspect of Nashville is the kind, warm, home atmosphere
• Career goal is to become a tennis professional
• Chose to attend Vanderbilt because “I fell in love with the culture and people. I found it the best place for me to learn and grow.”
• Father played college tennis at Rutgers