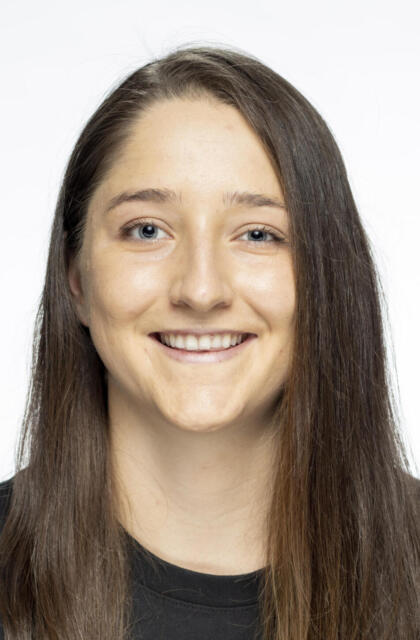 As a Fifth-Year Athlete (2020-21)
• Returned from injury to post a team-high 18 singles victories, going 18-6 on the season
• CoSIDA Academic Second-Team All-America
• 17-7 overall record in doubles play
• Returned from injury and worked her way up the roster from No. 4 to No. 1 in singles
• Defeated six nationally-ranked opponents along the way in singles play
• Closed the season winning six of her final seven decisions, reaching the Elite Eight of the NCAA Singles Tournament to be named an All-American for the second time in her career
• Along the way, defeated No. 44 Emmanuelle Salas of Florida State in the Round of 64, No. 10 Isabella Pfennig of Miami in the Round of 32 and No. 49 Kelly Chen of Duke in the Sweet 16 before falling to No. 2 Sara Daavettila of North Carolina in the Elite Eight.
• Also posted ranked wins over No. 123 Gia Cohen of No. 9 Georgia Tech, No. 56 Eleonora Molinaro of No. 19 Tennessee and No. 32 Emma Antonaki of No. 41 Mississippi State
• Started the season on a 10-match winning streak
• Clinched a pair of victories for the Dores
• In doubles, defeated both of her nationally-ranked opponents with Anessa Lee, going 14-4 with the freshman
• Took down No. 57 Anastasia Tkachenko and Lesedi Jacobs of No. 31 Kentucky and No. 88 Victoria Sec and Livia Lukacs of Ball State in the NCAA Tournament
• Finished off five doubles points for the team during the season
• Finished the season ranked No. 18 in the ITA singles poll

As a Senior (2019-20)
• 19-9 overall record in singles play with an 8-2 record in dual matches
• 8-14 overall record in doubles play
• Finished shortened season ranked No. 18 in singles
• Finished as the highest-ranked SEC singles player
• Finished the shortened season undefeated in conference play
• Nine-ranked singles wins
• Held five-match win streak
• Clinched upset over No. 2 Ohio State
• Quarterfinals of 2019 ITA All-American Championship
• Competed primarily at No. 1 in the lineup
• Remainder of season cancelled due to coronavirus outbreak on March 14

As a Freshman (2016-17)
• 27-12 overall record in singles play with a 12-11 dual match singles mark
• 25-14 overall record in doubles play
• Earned seven ranked wins throughout freshman year, four coming in dual match play
• Fourth Commodore since 2014 to earn a place on the SEC’s All-Freshman team
• Competed predominantly on court three in singles and doubles
• Third freshman Commodore to earn a coveted spot on the SEC All-Tournament team in as many years
• Rallied to defeat the 2016 SEC Player of the Year, Brooke Austin, in the tournament finale
• 15-1 fall singles record
• Debuted in ITA singles rankings at No. 28 in the nation and No. 53 in doubles with Sydney Campbell
• Earned highest win in fall against then- No. 21 Caroline Brinson

The Rosca File
• Ranked No. 1 in the State of New Jersey
• Ranked No. 25 In the nation
• Won the state singles title as a sophomore with Princeton High School
• Won the 2015 USTA Girls’ 18s Winter National Doubles Championship alongside then-partner and UNC freshman Jessie Aney