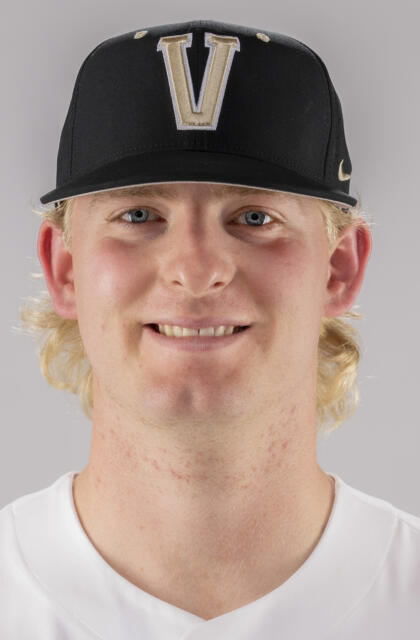 Head coach Tim Corbin on McElvain: “Mac is a team guy through and through. He came to us as a kid who could catch, play any infield position and pitch. He has been a very dependable pitcher for us and served every role as a pitcher. I love the fibers of the kid … you are always going to get his best. He has really transformed his body in the weight room and improved his fitness levels a great deal. We will give him the ball a lot this year.”

As a Junior (2022)
• SEC Pitcher of the Week (April 25)
• Seventh in the SEC in strikeouts
• Pitched the first seven innings of combined no-hitter at Kentucky (April 22) while striking out nine
• Totaled 10 strikeouts over 4.0 scoreless innings in season opener vs. Oklahoma State (Feb. 18), earning first win on the season
• Struck out 13 in 7.0 innings at Hawaii (March 4) for second win on the season
• Worked 6.0 innings in SEC opener vs. Missouri, striking out eight and picking up the win
• Threw seven shutout innings at South Carolina (March 24)

As a Sophomore (2021)
• Made 22 appearances to rank third on the team, including one start
• Tallied five wins on the campaign, which placed him third on the squad, while also adding two saves to his totals
• Totaled 45.2 innings of work, which ranked fourth on the team
• Registered 58 strikeouts, good for third-best amongst Commodore relievers
• Pitched 3.0 innings in the season-opener against Wright State (Feb. 22) where he fanned five, allowed three hits and only one run against the Raiders
• Picked up first win of the season in the midweek against UT-Martin (April 6), behind 2.0 shutout innings and four Ks
• Credited with the win in the come-from-behind victory over No. 4 Mississippi State with 5.1 innings pitched and four punchouts
• Fanned a season-high six in the NCAA Regional-clinching win over Georgia Tech