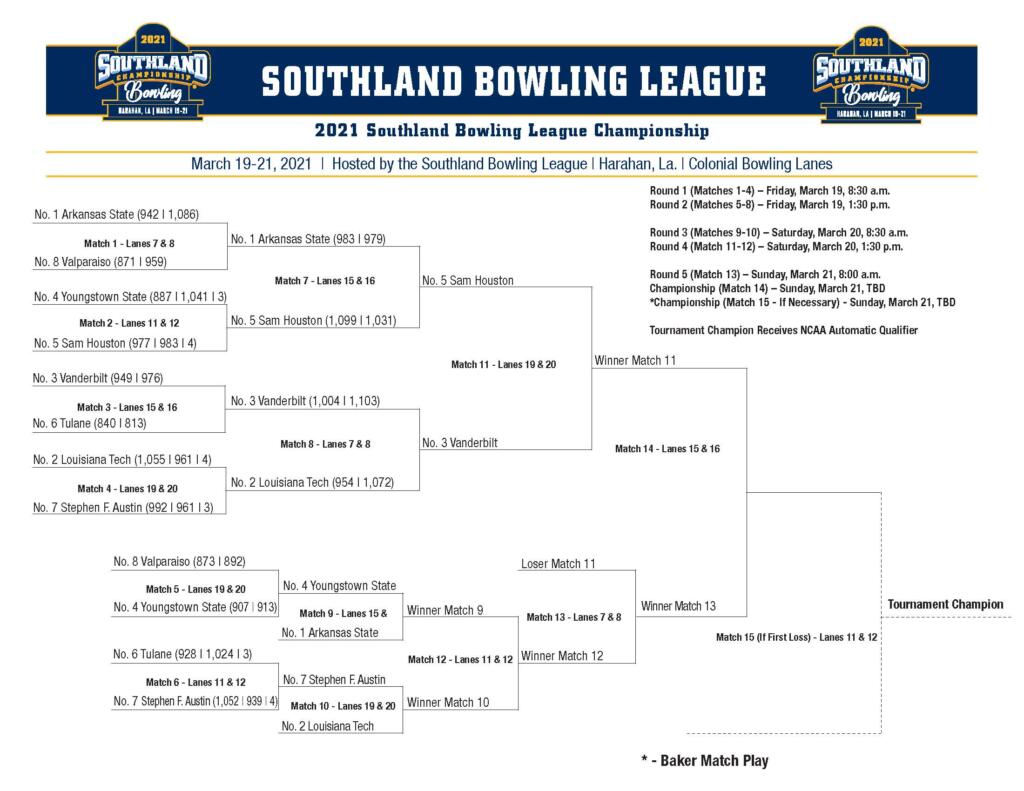 HARAHAN, La. — Vanderbilt swept two ranked opponents and advanced into the semifinal round of the Southland Bowling League Championship on Friday.

The Commodores will meet Sam Houston State at 1:30 p.m. Saturday for the right to move into Sunday’s championship game. The Bearkats upset top-seeded Arkansas State on the bracket’s other side.

The Commodores shut out 17th-ranked Tulane and sixth-rated Louisiana Tech by 2-0 scores, winning both traditional and 5-Game Baker sets in each contest. In doing so, Vanderbilt was almost unrecognizable from the team that struggled two weeks ago in its own home tournament, razor-sharp with its spare shooting and stringing strikes when necessary.

“That Tech match had the feeling of an NCAA semifinal kind of match,” Vanderbilt head coach John Williamson said. “We were trading shot for shot and it nice to see our girls were not the ones to flinch.

“You get into postseason and everything is a little different. We’re fortunate. We have some individuals that have had some success in big tournaments so they didn’t shy away from what was going on. They know we haven’t been executing and playing at a high level and we challenged them. It was a pretty complete day.”

The Tech match, played several hours after a rather routine win over Tulane in the day’s curtain-raiser, was played at a high level. Using a rotation of Angelica Anthony, Jennifer Loredo, Angelique Dalesandro, Caroline Thesier and Mabel Cummins, the Dores won the opening traditional game 1,004-954 with Thesier’s 224 leading the way.

The freshman from Mooresville, North Carolina, who sat out the Tulane match in favor of veteran Samantha Gainor, came out hot with eight strikes, including a point-icing bullseye in the 10th. Ironically, she also had the team’s only missed-makeable spare in the second frame to illustrate just how zoned in the Commodores were.

Cummins added a steady 208 and Jennifer Loredo, also playing in her first SBL championship, struck out for a 201.  Williamson said there was no special strategy in making the lineup adjustment.

“I felt like in the practice session Caroline had a pretty good look,” he said. “Those five were not necessarily our best five strikers, more the five best looks at the time. It was different than the five in the first game but when you have some depth you can afford to make some changes like that.”

In the mega-match format, the teams moved to the 5-Game Bakers, where total pin fall over the five determine the coveted point. Vanderbilt found itself in a quick hole despite a credible 208 when Tech piled on the strikes for a 233.

Once again, Vandy had just one missed-makeable and only two opens the entire grueling 50 frames.

“We put a lot of emphasis on spare shooting.” Williamson said. “When you are executing and making shots like we were today it makes spare shooting easier. Everyone seemed to have a good look at the pocket.”

Breaking down the 1,103 a bit further, all five Dores notched strikes at a 50 percent clip or better with their 10 individual frame chances and three – Anthony, Thesier and Cummins – had six out of 10. Anthony had the dubious distinction of owning both opens but the first one, coming in the first frame of Game 1, came with a silver lining.

“In some ways, that first split with Angelica was beneficial,” Williamson said, “because we switched balls. She was much better after it. If she had 9-counted we might not have changed but it was such a disastrous split we thought we needed a change.”

Saturday’s semifinal will be livestreamed by Inside Bowling. If there are any livestreaming issues, VandyBowling’s YouTube site will be employed as well.