Junior guard adjusting to new role with the Commodores

NASHVILLE, Tenn. — Adjusting on the fly has become second nature to Saben Lee.

Vanderbilt’s junior guard is taking the latest challenge thrown his way in stride once again and is poised to show off the latest version of himself when he returns to his home state at 5:30 p.m. CT Wednesday when the Commodores face Loyola (Chicago) in Phoenix.

“A lot of adjustments have been made,” Lee said about his Vandy career to this point. “I’m just a more mature player, a more all-around player. I’ve just evolved as a basketball player overall.”

Lee, averaging 17.2 points and 5.7 assists per contest, will play his 74th game in black and gold Wednesday when the Commodores take the floor at Talking Stick Resort Arena. The 6-foot-2 graduate of Corona del Sol High School in Arizona has flourished despite coaching and position changes since arriving to West End.

The latest curve ball thrown his direction came at the start of this season when new Vanderbilt head coach Jerry Stackhouse asked Lee, a two-year starter, to enter games off the bench.

“The fact of the matter is, our two best scorers, our 1A and 1B scorers, are Aaron Nesmith and Saben Lee. I want to try to stagger those guys,” Stackhouse said earlier this season. “It’s a huge advantage because we have a point guard (Scotty Pippen) already that can run the show and get us in things. It makes sense to start (Nesmith) with a point guard who we’re trying to groom for the future and our long-term plans of having the ball in his hands and being able to run the team.

“Then we come back with maybe our best scorer in the second unit that’s going against the other team’s second unit. I anticipate of seeing a lot more of that with (Lee) being able to take advantage and pick his spots.”

Lee is still playing nearly 29 minutes per game even if he’s not among the first five on the floor night-in and night-out. And coming off the bench hasn’t affected the junior’s ability to score – he’s finished in double figures in every game this season.

Against Buffalo on Dec. 3 he set a career high of 25 points.

Lee grew up in Arizona as the son of a former NFL standout and a Vanderbilt law school graduate. His father, Amp Lee, was a standout running back at Florida State from 1898-91 where he was an All-American. He also played nine seasons in the NFL

Lee’s mother, Natalie Williams, is the chief of staff at Paul Quinn College and holds a law degree from Vandy.

Saben Lee draws his character from both – the academic focus from his mother and athletic prowess from his father. Both will be in attendance to watch their son Wednesday – along with upwards of 40 friends and family and Saben’s Lee’s biggest fan, his 9-year-old brother Aubry.

“I’m extremely proud of him,” Amp Lee said. “I went through the process of recruiting and being an athlete and trying to juggle the academics and the strains and the pressures of all those things – and playing at a high level.

“I’ve always tried to give him some examples of situations to refer to in terms of just trying to find the balance. I’ve watched him mature both on the floor and in the classroom and it’s just been fun to watch. I tell him all the how the time how proud I am of him.” 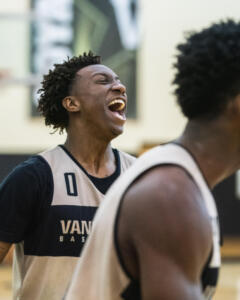 Needing 101 points for 1,000 for his career and 18 more assists to reach the 300 mark in that category, Lee was challenged by Stackhouse this preseason to lead the Southeastern Conference in assists. Going into Wednesday’s game he ranks fourth in the SEC in assists per game (5.7) and in total assists (51).

Those type of goals may have been the sort of standards Lee expected to reach as a freshman after he was recruited to play the point guard position coming out of high school in 2017. He averaged 22 points, five rebounds, four assists, three blocks and three steals as a prep senior and chose to be a Commodore – the night of his official recruiting visit to campus – over scholarship offers from Louisville, Stanford, Nebraska and, his father’s alma mater, Florida State.

But as a true freshman, Amp Lee said, Saben Lee wasn’t quite ready to take over the point guard spot from senior Riley LaChance. And last season the team was handed to future NBA Draft pick Darius Garland before Garland was lost for the season due to injury.

“I kind of tilted my head at it, trying to make sense of it,” said Amp Lee, a member of the Florida State Hall of Fame, “but at the same time what I said to him was, ‘We’re not really built that way – to pout. You got to keep going. It’s time to go, it’s time to lock in and it’s time to focus. You can’t go in the tank now because you got to go play.’ We talked about being able to deal with the things you can control. All he could really control is going on that floor every day to practice, go into every game and play to the best of his ability.

A major in human and organizational talent, Lee said he is now considering a career in coaching once his playing days are over. He did an internship with the YMCA and coached a youth basketball team where he joked he got the coaching, “bug.”

The lessons he’s learned so far under Stackhouse along with those from season’s past will certainly help in that endeavor. For now he’s just focusing on getting the Commodores in the win column.

“(Stackhouse) said I was going to have a big role – I do have a big role. Just a lot of the leadership role is going to be on me and (Nesmith),” Lee said. “And doing whatever I need to do to win games and defensively put pressure on people.

“(And offensively) it’s a challenge I’m willing to take – getting the ball to people and just trying to maneuver through the defense.”