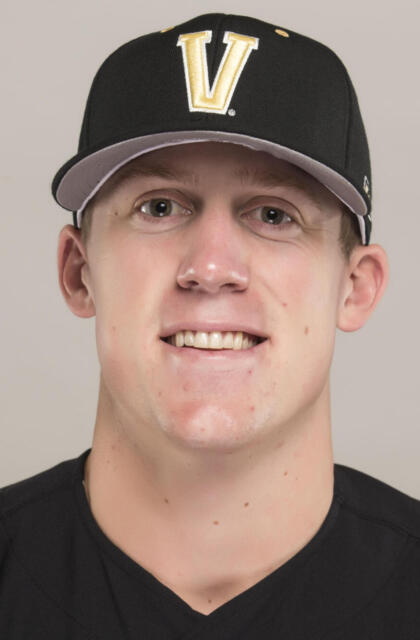 COACH CORBIN QUOTE – Tyler is a very invested young man. He is serious about everything that he does academically and athletically. Because of that, he is a high achiever. He is most enjoyable to coach because he is self-driven in every way. He has a great arm and continues to become more skilled. Tyler has been a mainstay on our pitching staff since his freshman year and will once again hold a very key role for us this year.

2015 – Struck out the side in a scoreless inning vs. Radford 6/1 in NCAA Regional championship… Made the start vs. Missouri 5/20 in SEC Tournament walking four and allowing two runs two hits over 1.1 innings of no decision… Turned in two scoreless innings of relief against Florida 5/8 allowing two walks and one of three inherited runners to score… Worked a season-high 3.1 innings allowing one unearned run on two hits with three walks and three strikeouts… Allowed one inherited runner of two to score at Belmont 4/28 recording the final two outs of eighth inning… Tossed a scoreless ninth inning in win over Missouri 4/24 with two strikeouts… Worked a clean inning vs. Belmont 4/14 striking out one… Tagged with his first loss of the season in 1.1 innings vs. Ole Miss allowing two runs on one hit and three walks… Allowed one run on one hit with three strikeouts over two innings vs. Lipscomb 4/7… Punched out four over two sharp, scoreless innings in relief vs. Wofford 3/31… Started vs. Quinnipiac 3/11 and walked five over one-plus inning… Walked three and allowed four runs without getting an out vs. Illinois State 3/1… Turned in a scoreless inning of relief vs. Western Kentucky 2/25 despite three walks… Allowed four runs on two hits and three walks while getting one out in loss to Indiana State 2/21 in Port Charlotte, Fla…. Struggled in his first start of the season with a career-high five walks in two-plus innings against Santa Clara 2/14 in game two of doubleheader.

2014 – Punched out two in one inning of relief vs. Virginia 6/24 in CWS Finals… Struggled with command in loss to Texas 6/20 at College World Series allowing two runs on one hit, two walks, and two hits while recording two outs… Came out of the bullpen for the first time this season working 2.2 scoreless innings and stranding two runners to earn the win against Stanford 6/6 in Super Regional victory… Walked three and scattered six hits while allowing one run over five innings of a no decision against South Carolina 5/17… Tossed five scoreless innings at Florida 5/10 scattering two hits and walking three in his seventh win of the year… Lost control in the fourth inning at Missouri 5/4 walking the bases loaded to end his day, allowed one run on two hits with five strikeouts across 3.2 innings in third no decision… Earned his sixth win of the season and snapped a personal three-game slide with victory vs. Georgia 4/27 allowing only one unearned run on three hits with five strikeouts over five innings… Lost his third straight game allowing three runs on three hits with two walks and two hit batters over four-plus innings at Arkansas 4/20… Took his second straight loss giving up six runs, five earned, on seven hits with five strikeouts across six-plus innings against Texas A&M 4/13… Pegged with his first loss of the season allowing a career-high seven runs, five earned, on six hits over 4.1 innings at Tennessee… Earned his fifth win of the year with six quality innings against Kentucky 3/30 allowing two runs, one earned, on six hits with no walks and five strikeouts… Tossed six scoreless innings to notch his fourth win of the season scattering two hits and fanning three at Mississippi State 3/23… Lasted just 3.2 innings in a no decision against LSU 3/15 G2 allowing two runs, one earned, on one hit with three strikeouts and two walks… Pushed his career-best to seven innings pitched with seven strong to earn the win over Winthrop 3/9 allowing one run on four hits with six strikeouts… Upped his career-high for innings pitched for the third straight start going six-plus innings in no decision vs. Stanford 3/2 allowing two runs on five hits with six strikeouts… Earned his second win of the season with a career-high 5.2 innings of work against UIC 2/23 and a career-best seven strikeouts allowing one run on three hits and three walks… Made his 2014 season debut and first career start in the weekend rotation at Long Beach State 2/16 tossing a career-best 5.1 innings to earn the win, allowed two unearned runs on one hit with no walks and three strikeouts.

2013 – Started four games and pitched in four more for the Dores in his first season at Vanderbilt, working into a midweek starter role during the season… Took his first career loss giving up three runs on five hits in just 1.1 innings against Tennessee Tech 4/16… Earned his third win of the year allowing two runs on six hits over five innings of a start against UT-Martin 4/9… Started his second career game, pitching 4.2 innings against MTSU 4/2 allowing two runs on three hits and a career-high four walks and four strikeouts… Picked up the win out of the bullpen with 4.2 scoreless innings of relief walking three and fanning three against Lipscomb 3/26… Turned in two scoreless innings with two strikeouts against Eastern Illinois 3/5… Earned the win in his first career start going five scoreless innings against Evansville 2/27 scattering three hits… Gave up two runs on two hits in 1.1 innings at Belmont 2/19… Made his collegiate debut on Opening Day allowing three runs on four hits over two innings in win over Long Beach State 2/15.

PERSONAL- Tyler Clark Ferguson… Born 10/5/93… Son of Jennifer and Jim Ferguson… Has one sister, Ashley… Nickname is Fergie… Favorites include Matt Harvey (baseball player), New York Yankees (baseball team), Moneyball and Hitch (movies)… Says he would be a doctor if not an athlete… Actor Christian Bale would play him in a movie about his life… Uses the word dedicated to describe himself… Roommates with Zander Wiel and Bryan Reynolds… Chose Vanderbilt because of the amazing coaching staff and program and a top-notch education.