KINGSTON SPRINGS, Tenn. — The Commodores are destined for the desert.

A scorching 9-under-par round Wednesday at The Golf Club of Tennessee gave Vanderbilt the Kingston Springs Regional championship as the team punched its ticket to the NCAA Championships starting May 28 in Scottsdale, Arizona.

Vandy finished 18-under-par for the event and flew 11 strokes ahead of second-place Arkansas. The regional championship is the first in program history.

“I couldn’t be more thrilled for a group,” Vanderbilt head coach Scott Limbaugh said. “That’s one of the hardest days in college golf and for our kids to come out and just run with it … I mean we had momentum from the start and for all five guys to be even-par or better (Wednesday) on this magnificent golf course, I truly couldn’t be prouder of a group.”

But the latest victory sends the squad to the compete against the best of the best in college golf.

Vanderbilt will be making its 10th appearance at the NCAA Championships.

“This is is a resilient group,” Limbaugh said. “They wanted this opportunity on this golf course this week. They weren’t afraid of the moment. They keep stepping up in big situations.” 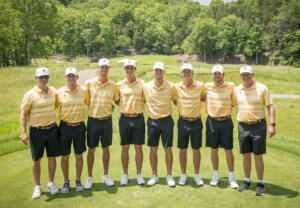 William Moll led Vandy on Wednesday with a 4-under-par round. He carded three birdies on the back nine and came in at 6-under-par for the Regional to claim a third-place finish.

Matthew Riedel also had his best round of the week with a 3-under-par thanks to four birdies on the day. The sophomore came in a tie for 13th.

Reid Davenport, the individual leader after Round 1, tied for fourth after an even-par third round. He was 5-under-par after 54 holes.

“I know what we’re capable of,” Limbaugh said about the makeup of his lineup. “Ever since we became a different team this spring, all we’ve talked about is ‘Let’s put our heads down and see how good we can become.’ To their credit that’s exactly what they’ve done.”

Vanderbilt was first off the tee Wednesday alongside first-place San Diego State and third-place Arkansas. Ten birdies on the front nine set the tone for a historic day.

The Dores found nine more red numbers on the back stretch to easily pull away from Arkansas and third-place Sane Diego State (-5). North Carolina State and Clemson both finished 3-under-par as a team and claimed the final two spots to advance to Arizona.

Puwit Anupansuebsai from San Diego State carded an 8-under-par for the tournament to win the individual championship. James Piot (-5) of Michigan State qualified for the NCAA Championships as an individual with a 4-under-par round Wednesday.

Kings of Swing by Vanderbilt Athletics on Exposure