NASHVILLE, Tenn. — On the depth chart and roster he’s listed as a linebacker. But that’s not how he is defined.

“I’m a football player. I love to play football. I’ll play anything – because I think I can, honestly,” Ethan Barr said. “I don’t think I’m limited to one spot on the field. Whatever I need to do for the team is what I’ll be happy doing.”

Vanderbilt is certainly happy Barr decided to be a “football player” for the Commodores.

The 6-foot-3, 236-pound true freshman has become an unexpected playmaker for Vandy in 2020. His 30 tackles through eight games ranks ninth among Commodore defenders and last week at Missouri he racked up a personal-best 10 stops.

Admittedly, Barr didn’t envision this sort of start to his career. 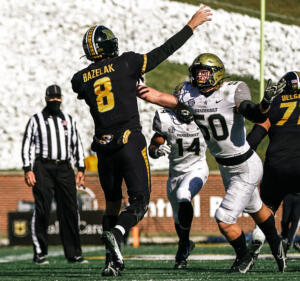 “Coming in, I figured it would probably be a year to two before I received game reps,” he said. “But that really didn’t affect how I came in. I came in wanting to play, but knowing that may not happen.

“I feel like I have exceeded my own expectations of how I’ve done this year. Getting to play you have to prove something to yourself every time you go out on the field. I think I’ve definitely done that. But there’s always room to grow and I definitely have a long way to go.”

In the football-rich state of Texas, Barr found a way to standout at Marcus High School in Flower Mound, a suburb of Dallas. He was a defensive captain that racked up more than 300 tackles during his career – but he also played quarterback, safety, tight end and running back.

In June of 2019, Barr committed to Tulane and was prepared to begin the next chapter of his life in New Orleans. But former Vanderbilt head coach Derek Mason paid Barr a visit at Marcus High School last winter and asked the prospect if he would be interested in visiting West End. 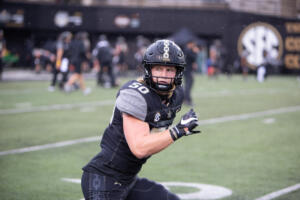 Barr said he hadn’t had the chance to take many recruiting trips and wasn’t going to pass up the opportunity to see what Nashville and Vanderbilt had to offer.

“It was a big decision, but I felt like Nashville was a better place for me and Vanderbilt was a better fit for me,” Barr said. “I really loved Vanderbilt because I saw a place that has the possibility to grow and be a great football team.”

The Barr family is no stranger to witnessing athletic success. Creighton Barr played football as an offensive lineman at North Texas and Emma Barr is a catcher for the East Central University softball team.

Ethan Barr said his brother Creighton has been an important resource with learning how to understand the demands of college football and, now, navigating an in-season coaching change. It’s all been a part of the younger Barr’s on-the-fly education in 2020. 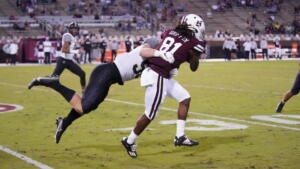 As a high school student, Barr began a landscaping business with friends and classmates to make some extra money around the neighborhood. That entrepreneurial spirit has him considering a major in economics with a minor in business so he can possibly start his own business one day.

For now, Barr will be looking to close out his first season on West End – a season which has shown much promise.