NASHVILLE, Tenn. — The big question about track and field standout Divine Oladipo is how does a teenager in London, with no previous connection to any specialized event, find herself with a shot put in her hand?

The Vanderbilt senior answers by telling a story about how when she was about 14 years old, a group of track and field coaches came to her school to demonstrate all the competitive events within track and field. Oladipo was already fond of—and very good at—sprinting and running, but she thought she would have a go at some of the field events.

She and everyone watching soon came to the realization that a serendipitous discovery had been made. So despite having just picked up the shot put not too long ago, and taking a more circuitous college route than most, Oladipo still has a learner’s attitude about her relatively newfound passion.

“I think I’ve still got a long way to go. I feel like this is now just the beginning,” Oladipo said about her rapid rise as a thrower. “I feel like everything is really coming together, and that’s what I’m most excited for.” 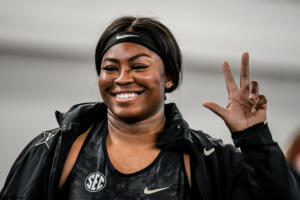 Oladipo has her sights set on an SEC title Friday, when she competes with the Commodores at the SEC Championships in College Station, Texas. The Connecticut and Ohio State graduate goes into the shot put event with the second-longest throw by an SEC competitor during the indoor season, trailing Tennessee’s Latavia Maines by less than a foot.

The SEC shot put championship is scheduled for 4:30 p.m. Saturday.

“I hope to win an SEC title. That’s really my big goal right now,” Oladipo said. “I just want to have fun with it, do as much as I can and do my best.”

When Oladipo graduated high school in England she knew she wanted to continue her educational and athletic career in the United States. Her quest for high-level athletic competition and rigorous academic courseload led her first to the University of Connecticut.

In the summer of 2019, however, UConn went through some coaching staff changes, and Oladipo began to explore the idea of transferring to pursue a graduate degree. Ashley Kovacs, who was then an assistant coach Ohio State, had seen Oladipo compete and caught wind of her availability and eligibility.

“Divine is an extremely talented athlete,” said Kovacs, who now is the associate head coach and throws coach for Vanderbilt. “You just don’t see athletes of that caliber in this discipline that often. She’s extremely ballistic and very versatile and very dynamic.”

Oladipo joined Kovacs at Ohio State for the 2019–20 academic year, but the COVID-19 pandemic derailed that season. (Oladipo was ineligible due to NCAA transfer rules anyway.) As a fifth-year senior for the Buckeyes, Oladipo, who also competed in the discus, became a second team All-American and finished sixth at the Big Ten Outdoor Championships in the shot put.

Then, right before the start of the 2021–22 season, Kovacs received a phone call—and a job offer—from new Vanderbilt head coach Althea Thomas. When Oladipo heard the news, she had no doubts about following her coach. 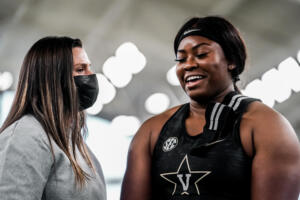 “I was freaking out a bit, but my first question was, ‘OK. Well, how do I come too?’ ” Oladipo said. “I think she’s a great coach. I see myself being with her for a long time. I don’t see myself being coached by anyone else. She’s someone that has always motivated me and led me to great achievements even in the short time that I’ve known her. At that point it was like, ‘Wherever you’re going, I’m going.’ ”

Those choices by both women have made all the difference.

For the first time in their respective careers, Oladipo and Kovacs were able to work together almost exclusively. This past offseason, Oladipo put more focus into the weight room and on improving her technique, studying the analytics of her throws. A constant refrain during practice has been the understanding that correct technique leads to better throws—and Oladipo has taken that to heart.

“It was just her and me for the entire fall, essentially. We kind of saw it as making up for lost time together,” Kovacs said. “We had a lot of space where I could give her my undivided attention and really dial in and individually focus on her needs and what we thought that she needed to do to grow.

“We’re definitely seeing the benefits of that, the fruits of our labor from all that time that we spent this fall.”

The daughter of Nigerian natives who moved to London, Oladipo is pursuing a master’s degree in human and organizational development. She already has a master’s in accounting from Ohio State and a bachelor’s degree in economics from Connecticut.

Those three degrees will undoubtedly take her places once her competitive days are through. However far in the future that is. 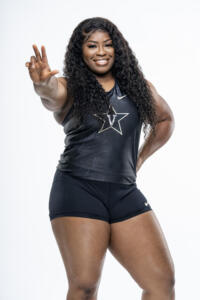 “I feel like we haven’t seen the best of Divine yet, and I hope that at some point this season we will,” Kovacs said. “I still think that there are so many layers that we can add on top of what she’s done to get to what she can become.

“She has unlimited potential. Physically she’s extremely talented, and technically we have a lot of things that we can still do better on. She can definitely reach the top of the sport.”

After this weekend’s competition, Oladipo and the Commodores will turn their attention to the NCAA Championships starting March 11 in Birmingham, Alabama. From there they will segue into the outdoor season, leading up to the league championship event in May, the NCAA Preliminaries at the end of the that month and the NCAA Championships in June.

Oladipo has her eyes set on all those marquee events, as well as a future matching herself with the best in the world. Quite the aspiration for a young Englishwoman who not too long ago hadn’t laid hands on a shot put.

For Vanderbilt's Althea Thomas, track and field has always been a way to lift up young people and strengthen a community.

Lily Williams thought she was done with sports when she graduated. Five years later, she's racing in the Olympics.