A pitchers' duel. A blown lead. A ninth-inning rally. Oh, and some colorful on-field chatter for good measure. Vanderbilt's College World Series rematch with Louisville on Friday featured a little bit of everything, a unique recipe of drama that amounted to must-see TV at TD Ameritrade Park.

In the end, with the final result cemented, Commodores’ head coach Tim Corbin could only breathe a sigh of relief.

Them, us, everyone -- that was an emotional game in so many different ways. 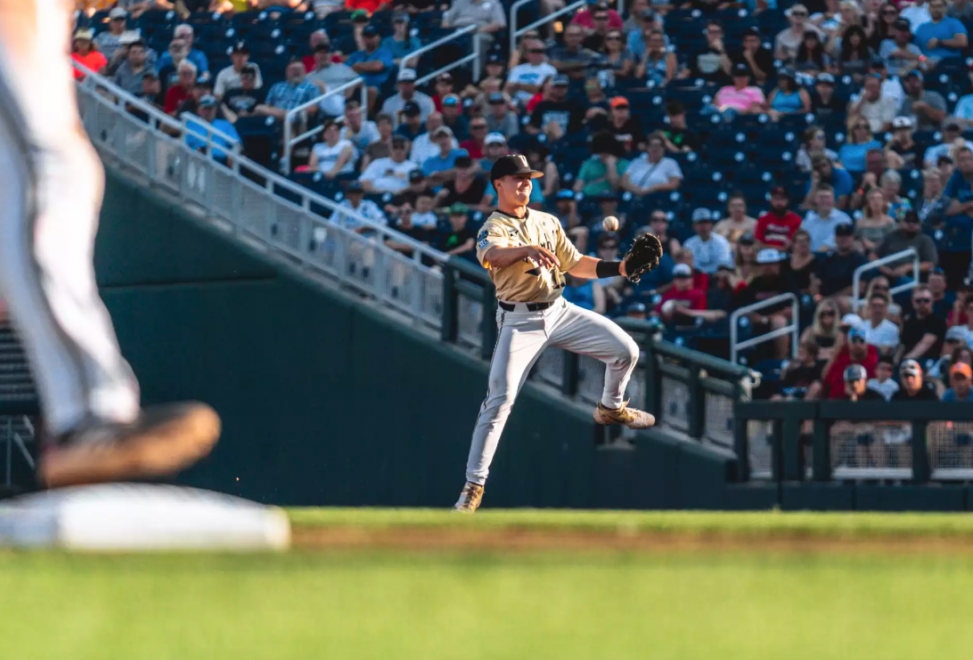 Emotion was not enough to derail Vanderbilt’s ultimate goal of a shot at a national title. The Dores staged a late rally to drop Louisville, 3-2, at the College World Series, avoiding a do-or-die Saturday matchup and instead clinching an outright spot in the championship series in Omaha. Vanderbilt will face off against Michigan in a best-of-three series beginning at Monday at 6 p.m. CT for the NCAA title.

But a chance for the program’s second national championship was not on Friday night’s list of priorities. Instead, Corbin opted to appreciate how his team got there.

I think right now I just want to enjoy this win tonight and focus on the kids and the ability just to decompress and take a breath. 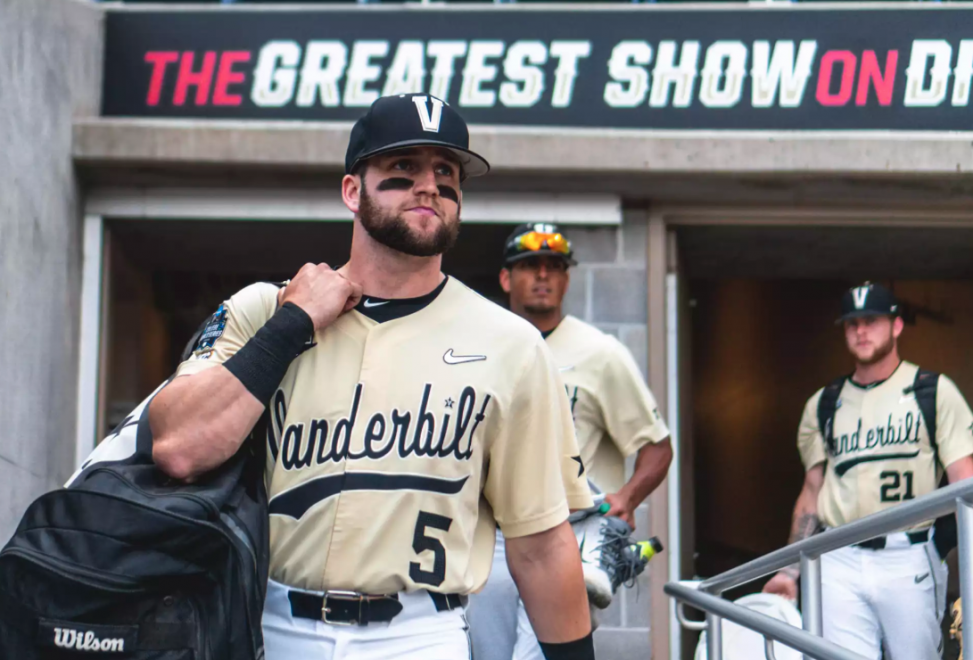 Vanderbilt needed to beat Louisville for the third time this season – and second time in less than a week – to secure a spot in the championship series. Having already disposed of the Cardinals, 3-1, last Sunday, the Dores sent starter Mason Hickman to the mound in what became a tale of two pitchers until the seventh inning. That’s when Louisville found momentum behind an equally stellar outing from starter Luke Smith.

With two on and two outs with a 1-0 lead for reliever Jake Eder, Vanderbilt catcher Ty Duvall overthrew third base while attempting to spoil a steal by Louisville’s Justin Lavey. Lavey scampered home to knot the game at 1-1. The Cardinals belted an RBI single on their next at-bat for a 2-1 lead in the bottom of the seventh. Momentum quickly shifted to Louisville’s dugout. 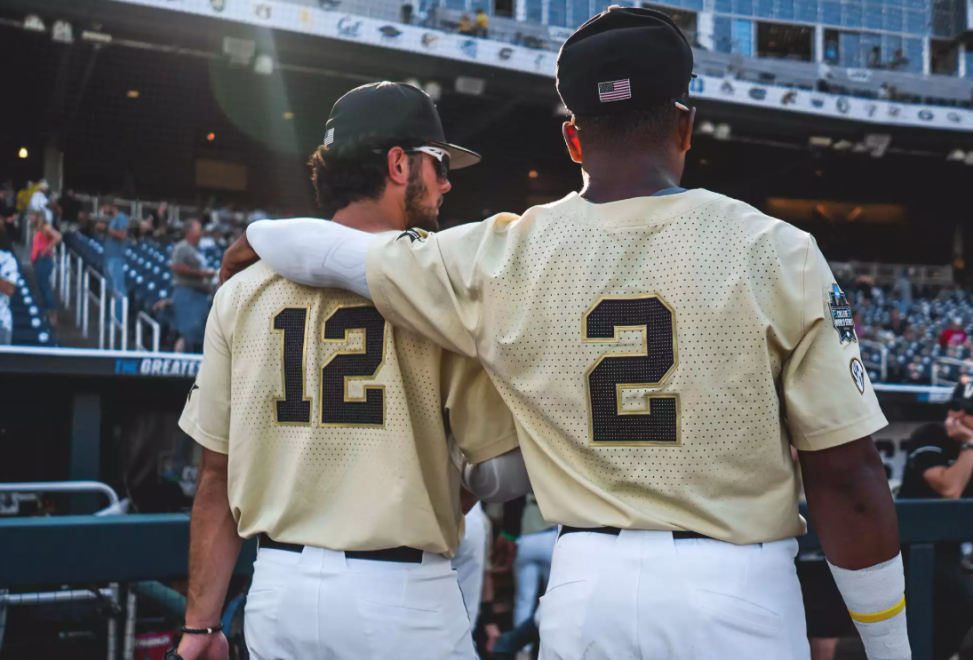 Vanderbilt couldn’t answer in the top of the eighth, and when a strikeout by senior Julian Infante ended the inning, a stare-down between Smith and Infante turned into shared words en route to their respective dugouts. The Dores and Cardinals suddenly looked like two teams with a mercurial history, one that included an annual nonconference matchup and nine previous meetings in the NCAA Tournament.

The Dores responded like a team that had its eyes on a bigger prize. In the top of the ninth, Louisville needed just three outs to force a Saturday matchup between the teams. That’s when Ethan Paul’s RBI double sent home JJ Bleday and tied the game at 2-2. Pat DeMarco followed with an RBI double down the third-base line that plated Paul. Just like that, Vanderbilt – and its suddenly raucous dugout — had grabbed a 3-2 lead.

“I thought the guys did a nice job,” Corbin said. “You can’t play this game angry. You just can’t. You have to contain your emotions.”

Vanderbilt completed the comeback with a pair of Tyler Brown strikeouts and an acrobatic Harrison Ray catch for the final out. The win assured the Commodores a chance to play for the national championship for the first time since 2015. All season long, this group has lauded its deep and dangerous roster. That teamwork came through when it mattered on Friday.

We talked about that before the game started. I thought it would get to that point at some time, and I thought the most important thing was containing emotions and containing adrenaline at certain points, and I felt it could happen. I knew at some point they would land a punch, and it was going to be a matter of how we responded. 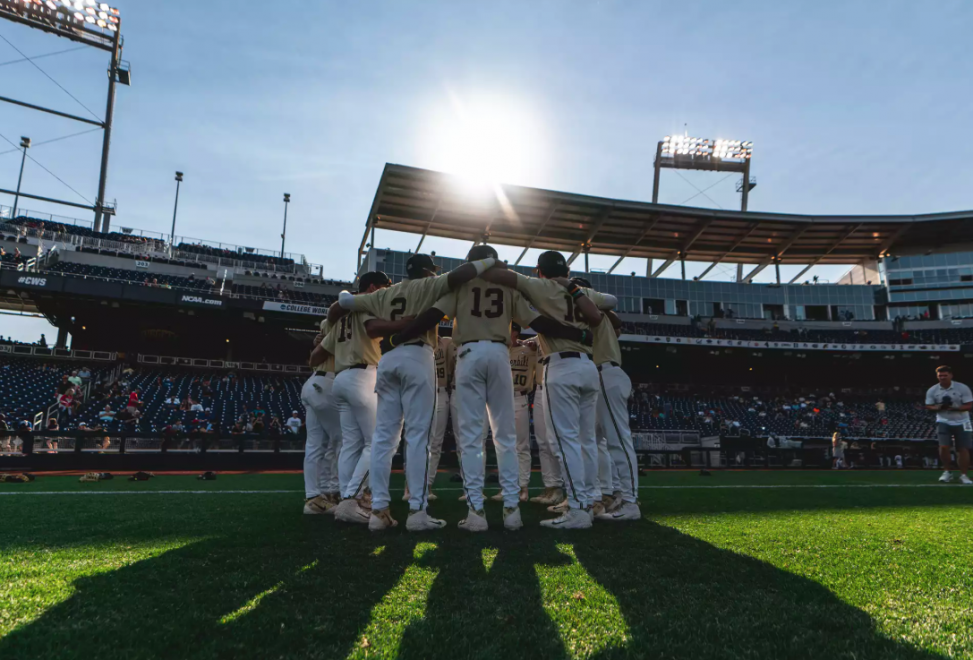 This team is special because no one really cares who steps up and gets that big hit or that big play. I mean, I can say honestly I think that this team just wants to compete and play all nine. We knew we had to play a complete game to beat those guys tonight, and some guys stepped up when we needed them.

Added DeMarco: “We try not to give energy to the other team. We know how that works. So we just tried to re-center ourselves, come back and focus the energy on us, and we came out on the right side.”

In the end, Hickman allowed no earned runs in six innings. Brown set a program record with his 17th save of the season. The Commodores made the most of their six total hits late in the game. Afterward, Louisville coach Dan McDonnell called Vanderbilt’s order “one of the better lineups they’ve ever had.” How that translates against Michigan next week remains to be seen.

But thus far, the Dores have taken care of business every step of the way. That’s worth celebrating, Corbin said.

“When you get to this point, you’re trying to separate yourself from another championship team because really all these teams right now are championship level,” Corbin said. “Dan’s team certainly is that.”