Off and Running in Kingston Springs

Davenport out in front after 18 holes of NCAA Regional

KINGSTON SPRINGS, Tenn. — Led by Reid Davenport’s six birdies, Vanderbilt got off to an impressive start on the first day of the Kingston Springs Regional at The Golf Club of Tennessee.

Davenport shot 6-under-par and is the outright leader going into the second day of the tournament.

“I’ve been playing pretty good, especially at SECs, so it’s kind of fun to bring what I did at SECs for the next two days – hopefully – over here to Regionals,” Davenport said. “But I wasn’t really expecting to go super low. I just stuck to my game plan and things just fell into place and worked out nicely.”

Davenport, who tied for 12th in stroke play and went 3-0 in match play at the SEC Championships in April, was 2-under-par through his first nine before turning it up on the back stretch. He birdied the par 3 10th, par 5 11th and par 4 12th to get to five-under-par. A birdie on 17 and par on 18 closed out his day.

The strong round by Davenport helped Vanderbilt as a team shoot 5-under-par. The Commodores sit two shots back of leaders North Carolina State and Kent State. Houston (-5) is also tied for third while San Diego State (-3) is alone in fifth.

The top five teams after Wednesday’s final round advance to the NCAA Championships.

“First day of Regionals, to have five of our guys in in all day, I thought was really important. I think it will be important going forward,” Vanderbilt head coach Scott Limbaugh said. “Reid played a huge round for our team, maybe as big of a round as we have had played all year. Just played awesome. Made some big par saves through the round which kept his momentum – and to go bogey-free around this golf course is pretty special so really proud of him.

“Really proud of the way William (Moll) hung in there and finished with birdies on his last two holes. He just remained patient today and as a coach that just shows me a lot of growth.” 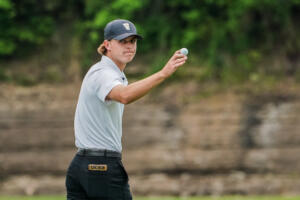 Moll, fresh off his selection as a First Team All-SEC member, was 1-over-par through nine holes. But the sophomore birdied thrice on the back nine, including 17 and 18, to finish 2-under-par and tied for eighth overall.

Michael Shears began Vandy’s round and was the first Commodore off the course. He carded a 1-over-par and is tied for 29th.

The Commodores are scheduled to take the first tee at 7:30 a.m. Tuesday along with co-leaders Kent State and North Carolina State. Live scoring for the event can be found HERE.

“I just think this is an important week. We know that. We just have to understand that we’ve played with consistency all day and Tuesday will be a really important day,” Limbaugh said. “We’re going to need all five guys playing Vandy golf and having fun. We know what it takes and we just got to keep playing our game.

“We just need to continue to trust each other and don’t focus on the results. We just want to focus on controlling the things we can control.”