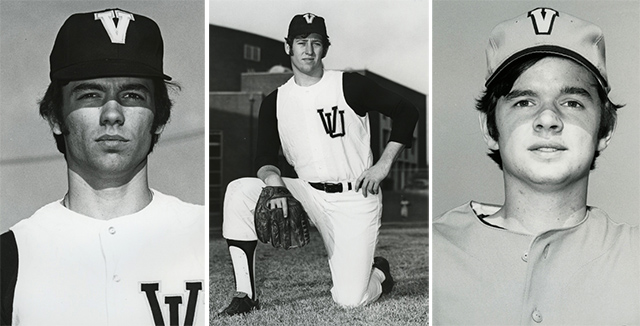 March Madness has been attributed to the season-ending NCAA men’s basketball tournament. But in March 1971, the Vanderbilt baseball pitching staff went mad and tossed three no-hitters in five games. And a fourth hitless game was recorded later in that same season.

On March 18, 1971, Vanderbilt was scheduled for a seven-inning doubleheader against Louisville on McGugin Field. Vanderbilt was 3-1 and spring had yet to arrive. Daytime highs were in the mid-40s. The Tennessean reported on that first day of madness.

Five runs usually don’t win a doubleheader so easily. But, that was more than enough for Vanderbilt to sweep past Louisville, 3-0, 2-0 at McGugin Field yesterday afternoon.

The reason? Commodores Mike Willis and Doug Wessel fired back-to-back no-hitters, something unprecedented in Southeastern Conference annals, if not in baseball. In fact, the two no-hitters reportedly were only the third and fourth recorded in SEC history. Former Vanderbilter Elliott Jones had one of the first ones, that coming last year.

“It’s something you’ll probably never see again,’ said Vandy head man Larry Schmittou. “Actually Louisville had beaten Jacksonville and got beat like 10-9 on its Florida tour. I think they were just two great games. Willis looked as good as I’ve ever seen him.”

Willis came up with his second straight shutout in the opener, fanning 14, including the first eight batsmen he faced. Mike allowed the Cardinals to hit just one ball out of the infield. Willis walked just two and another Redbird reached on an error to give the visitors a meager three base runners.

Wessel allowed the same number to reach base in the nightcap, all on walks while recording 12 strikeouts. Yesterday Vandy was able to muster just 11 hits, with three Commodores getting two apiece. Jerry Reasonover had one in each game, as did Bill Winchester.

Chuck Boyett, the Commodores catcher, went 2-for-2 in the lid-lifter, including a single in the Commodores’ two-run second inning. In that inning, John McLean, Adam Carroll and Boyett each singled, with McLean scoring on Willis’ sacrifice fly and Carroll on a double steal. The Commodores picked up their third run in the fifth when Jimmy Conn drew a free pass, stole second, and then moved home on a passed ball.

In the night-cap, Vandy used single-run innings in the fourth and fifth for the victory margin. Tom Whitten’s two out triple plated Tommy Powell in the fourth inning, and Winchester’s two-bagger drove Estep in the fifth.

The very next day, Vandy ace pitcher Jeff Peebles was scheduled to pitch a nine-inning game against Bowling Green at McGugin. Peebles did not give up a hit until the seventh inning in a 13-0 rout of the visitors. That made it 20 consecutive innings without a hit for Commodore pitching. Peebles was relieved after seven innings.

The phenomenal Vanderbilt pitching streak was not over.

The very next day, Vanderbilt was scheduled with another doubleheader this time against Calvin College once again on McGugin Field. After winning the first game 5-4, another no-hitter was tossed by a Vanderbilt pitcher. This time Ed White performed the feat in the nightcap.

White was a sophomore and an MBA graduate. The right-hander struck out seven and walked one in the seven-inning game. White credited a cold wind blowing against him that aided his sharp curveball in the 13-0 win. This was Vanderbilt’s third no-hitter in five games or three no-hitters in three days.

Wessel would toss his second no-hitter and the Commodores fourth of the season on April 19 at Centennial Park against Belmont College. The Tennessean wrote about the nine-inning contest.

Vanderbilt right-hander Doug Wessel had his fastball smoking last night and hurled his second no-hit game of the season, a 4-0 win over Belmont’s Rebels at Centennial Park. Wessel, who leads the Southeastern Conference in strikeouts, fanned 19 Rebels as he picked up his fourth win of the spring in what was to be an abbreviated night of `loosening up.’

“I only wanted him to throw 100 pitches, just to loosen up for this weekend,” Commodore coach Larry Schmittou said. “And, if they had got just one hit, I would have pulled him. Wessel threw well tonight, but it wasn’t anything to the smoke he had on the ball in relief last Saturday at Tennessee.”

Wessel, who at one time fanned eight batters in a row, allowed only one ball hit out of the infield and left fielder Jeff Peeples turned it into a double play in the third. Just three Rebels reached base, two on walks and one, Chuck Cooper, on a two-base throwing error by Vandy’s third baseman, Jerry Reasonover.

“It was a good night for pitching,” Wessel said. “I felt good and I was certainly glad coach Schmittou didn’t take me out. I had my fastball moving and the curve, too.”

Overlooked in the game were the five stolen bases by Vanderbilt shortstop Jimmy Conn that tied a single game SEC record. In the fifth inning, Conn walked, stole second and came home on a wild pickoff throw to first base by Rebels’ pitcher Dwight Bernard on Reasonover. That would be all the runs necessary for the win, but the Commodores scored three more runs in the seventh on singles by Reasonover, Steve Estep and Jeff Love and a double by pinch-hitter Bill Winchester.

Wessel, a right-hander, is listed in the Vanderbilt pitching records as fourth all-time in single-season strikeouts (131) and ninth in career strikeouts (244). He holds the single-game Vandy strikeout record (23) against UT-Chattanooga on April 21, 1970.

Though record-keeping for Vanderbilt baseball is limited before the scholarship era began in 1968 under Schmittou, one more no-hitter was discovered in the previous year. On April 3, 1970, Elliott Jones, a right-hander, pitched nine hitless innings only to take the loss in the 10th frame. The Tennessean reported on the game in Lexington, Ky.

A superb Kentucky defense and heroics by infielder Dave Bair enabled the Wildcats to win a 10-inning, 3-0 victory over Vanderbilt yesterday as Elliott Jones lost another heart-breaker. Jones, the Southeastern Conference leading strikeout pitcher last spring, hurled nine and one-third innings of hitless ball before falling in the 10th. In his last start before yesterday, Jones had lost a two-hitter to Florida.

Bair, a Kentucky footballer, powered a 375-foot home run over the left-field fence to drive home three runs with one out in the last of the 10th.

Jones struck out nine batters and walked two men. He walked the first batter he faced in the game and another in the fourth. He then retired the next 18 batters before the 10th inning home run. Vanderbilt collected eight hits in the shutout loss.

“It was another mighty tough one for Elliott,” Vandy’s coach Larry Schmittou said. “He just pitched a great game, even better than he had against Florida when he lost, 2-0 But, things will turn around for him, because he’s just pitching too well to continue to lose.”

Jones (1968-70) was drafted twice by the major leagues in 1971. Boston selected him in the sixth round of the winter draft and Pittsburgh chose Jones in the 12th round of the June draft. He played two seasons in the Pirates Single-A system.

Traughber’s Tidbit: The 2012 SEC Media Guide lists in its records section a listing of 34 no-hitters. The no-hitters range from 1897 (a Georgia pitcher) to 2002. The SEC was established in 1932. The only Vanderbilt no-hitters listed are the two by Doug Wessel in 1971. Their criteria for inclusion states “perfect games and no-hitters listed are only those which were also complete games for the pitcher of record.” The no-hitters by Mike Willis and Ed White are not listed, but I believe should. The Jones no-hitter was not a complete game.

Tidbit Two: Mike Willis, a left-hander, is in the Vanderbilt all-time record book with the ninth-best single season ERA (2.39), fourth in career wins (24), second in career strikeouts (350 – second to David Price), seventh in career ERA (3.10) and fifth in innings pitched (307.2). The Baltimore Orioles drafted Willis in 1972 in the 20th round of the Major League draft. Willis was traded to Toronto, where he played five years (1977-81) with a 7-21 career record, 149 strikeouts. He appeared in 144 games (six starts) with 15 saves and 296 innings pitched with a 4.59 ERA. Normally a relief pitcher, Willis started a game in 1978 and beat the Yankees’ Ron Guidry, 8-1, in a season Guidry went 25-3 and won the AL Cy Young award. It was his only career win as a starter and only complete game. Willis called it “the game of my life.” (To read my interview with Mike Willis find “Commodore History Corner” Archives on April 20, 2011).

Tidbit Three: Elliott Jones’ father, Ernest, acquired a master’s degree at Vanderbilt and became a professor of physics at Vanderbilt in 1950. Ernest, who is now 96, was a physicist on the Manhattan Project in New York City and moved to Oak Ridge for the Atomic Energy Commission. During the 1960s he was on the athletic committee as a faculty representative and worked closely with Jess Neely, the athletic director at the time. Neely told him to find a baseball coach since the program was not being taken seriously as football and basketball. Baseball scholarships were not given prior to the arrival of Larry Schmittou in 1968. Jones contacted Schmittou about the baseball coaching position. Schmittou was also Elliott’s summer league baseball coach. Neely met with Schmittou and he was hired. Elliott’s son, Warner, played baseball for Vanderbilt (2003-05), where he was First Team All-American and First Team All-SEC as a second baseman. Warner was drafted by Detroit in the 17th round of the 2005 MLB draft.

If you have any comments or suggestions contact Bill Traughber via email WLTraughber@aol.com. If you know of any Vanderbilt baseball no-hitters not mentioned in this story, I’d like to know.