Morgan Back in Music City

NASHVILLE, Tenn. — LaMar Morgan knows all about the Vanderbilt experience. And he’s back for more.

“I think what is unique about Vanderbilt is, of course, academics and the SEC, which are really huge for the student-athletes we are blessed to recruit and coach every day,” Morgan said. “But I also think what is cool here is just the engagement and involvement that kids get in their education. It’s not just the degree here – all the experiences our student-athletes are able to get by being here at Vanderbilt I think are priceless.”

Morgan, who has joined head coach Clark Lea’s staff as the program’s cornerbacks coach, came to Nashville first in 2012 and spent two seasons as a graduate assistant for former head coach James Franklin. The years since have seen the former college captain mostly spend time in Louisiana and Texas – the latter being where his football education began.

After having been born into a military family in Tacoma, Washington, Morgan moved to Copperas Cove, Texas, where he would go on to star for Copperas Cove High School. Robert Griffin III and Charles Tillman are a few of the other notable alumni from the school located about 80 minutes north of Austin, Texas. Former Commodores Zeke Brandon, Gary Wright and Lance Garner also graduated from CCHS.

Now after each season at Copperas Cove, the coaching staff awards the LaMar Morgan Award for the team’s defensive most valuable player.

“It’s a smaller, one-high-school town,” Morgan said. “We were close to an Army base so I was exposed to people from all over. I built a lot of different relationships.

“And I remember not coming from much growing up and the one thing my mom always valued and preached was education. That’s really big. My mom always talked about that and how you treat people. That’s what I try to do with my little ones now.”

Not only will Morgan himself be impacted by his move back to Nashville from his alma mater of Louisiana Lafayette, where he spent the past two seasons, but so will those closest to him. 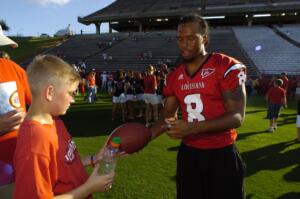 Morgan’s wife Jazen Morgan went into labor in November giving birth to twins – Jazen was only 24 weeks pregnant at the time. The Morgan twins were born weighing just more than one pound each.

Both Kalais Morgan and Krue Morgan are doing well now, although each still face challenges in their physical development.

“It’s just an unbelievable opportunity to come here and know we have the peace of mind to be with all the top-notch doctors nearby,” Morgan said.

A 6-foot-2, 209-pound safety for the Ragin Cajuns from 2003-07, Morgan registered 111 tackles and four interceptions while becoming a semifinalist for the Campbell Trophy. He had a brief playing career in the Arena Football League before deciding to become a football coach. 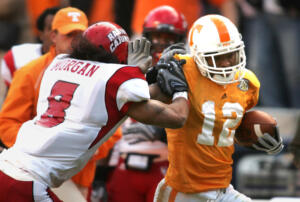 Morgan’s journey has included stops at Western Carolina, Louisiana Monroe, Houston and Louisiana Lafayette. Now he is a Commodore once again and will soon began speaking to Vandy’s defensive backs about his expectations for them as student-athletes.

Those expectations are pretty cut-and-dry.