Minter to Make Most of Music City Opportunity

NASHVILLE, Tenn. — Admittedly, the next step in Jesse Minter’s coaching career was a difficult decision.

He had two amazing options on the table before him: Remain in the NFL with a successful organization or return to the college ranks to challenge himself in the Southeastern Conference. 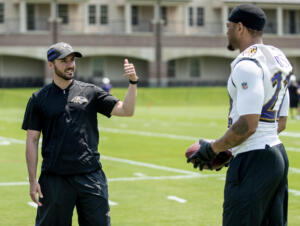 “There had to be a certain level of job that I would leave where I was at for,” Minter said. “I think there’s something special in building and the gratification of maybe doing things that people on the outside don’t expect you to be able to do.

“So it came down to Clark (Lea’s) vision and being able to create that culture of togetherness and unity. If we create that and play really hard, all the scheme stuff will take care of itself and we’ll give ourself a chance to win some games.”

After four seasons with the Baltimore Ravens, Minter accepted Lea’s offer to become Vanderbilt’s defensive coordinator and safeties coach. He said arriving at that decision was only made tougher because of how much Baltimore head coach John Harbaugh and defensive coordinator Don Martindale wanted him to remain on staff while they were simultaneously excited about his big opportunity.

Minter coached the Ravens’ defensive backs in 2020 after arriving in Baltimore as a quality control coach in 2017. Before then he coordinated defenses at Indiana State and Georgia State, respectively.

The son of former Cincinnati Bearcats’ head coach Rick Minter, the younger Minter plans to apply what he soaked up in the pros to the Commodores on the defensive side of the ball.

“I feel like going to the Ravens was like four years of going to master’s level classes,” he said. “Trying to add to some things and develop more and always trying to find better ways to do things, I’m ready to test it out and see where it’s at. I look forward to having the opportunity to do that.” 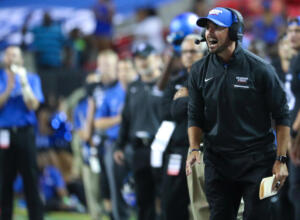 In 2016, Minter’s final year at Georgia State, the Panthers ranked eighth in the FBS in pass defense by allowing just 173.9 yards per game and sixth in passing efficiency defense (104.99). He was nominated for the Broyles Award as the nation’s top assistant coach in 2015.

Minter’s defense at Indiana State in 2012 ranked third in the FCS by giving up just 14.3 points per game and sixth nationally having surrendered only 296.4 total yards per contest.

While not ready to divulge what scheme or base formation the Commodores will line up in during Week One of the 2021 season, Minter said Vandy will have multiple looks for the opposition to prepare for and that success will stem from him and his staff’s ability to best prepare the student-athletes each and every week.

“You have to look at things from a big-picture standpoint, but also fine combing every detail you’re asking guys to do. My No. 1 goal is to put our players on the field with the tools to be successful,” Minter said. “That means they’ve gone through drills that prepare them to be out there. They have calls and we have schemes that prepare them to be ready to defend what we’re going to see. They have an idea of what the offense is going to do through thorough game planning and studying of our opponents. We are putting them out there with a chance to be successful.

“The game always has been, and always will be, about players. We don’t go out there and play. It’s our job to take them where they are now and give them the tools and the resources to grow and develop. Hopefully by the time we put that product out there in September, we’ll have given them all the resources and tools they need.”

Minter’s aunt and uncle live in nearby Franklin and one of his cousins works at Vanderbilt University Medical Center, so the long-time defensive coach has known about Nashville and West End for a long time. Getting to coach in Music City and in the top conference in college football is exciting, he said, but so is the vision that Lea laid out before him.

And he couldn’t be more excited to be a part of a new era of Vanderbilt football.

“When Clark and I had a chance to sit down, you could feel his passion and his energy toward this place and this specific place,” Minter said. “I’m sure because of his success there have been other opportunities, but you could just tell this is an opportunity he’s been preparing for since he played here.

“He has a specific goal and plan for us to be able to win here. I believe in it. I’m humbled and honored that he chose me to be a part of it.”