Mignone Making Most of Unlikely Opportunity

NASHVILLE, Tenn. — About this time last year, Connor Mignone was staring down the final leg of his college career.

The starting left tackle for Central Connecticut State University had put together an impressive resume and had hopes of helping Central Connecticut make a deep run into the Football Championship Subdivision playoffs. But a first-round, 42-14 loss to Albany brought Mignone’s playing days to an abrupt halt.

A second reconstructive labrum surgery on his left shoulder soon after that loss had Mignone thinking his days on a football field were indeed over.

“But I had an itch,” Mignone said. “I got bit by the football bug to come back for a final year. And I thought there was no better place than Vanderbilt.”

Former Central Connecticut head coach Pete Rossomando joined the Vanderbilt staff in January and contacted Mignone to gauge his interest in playing for the Commodores. The Redding, Connecticut, native couldn’t pass up the opportunity.

Going into Saturday’s game at Mississippi State (2:30 p.m., SEC Network), Mignone has started three games at right tackle and one at left guard for Vanderbilt. And he admits at times he stops to marvel at where he is today.

At Joel Barlow High School in Connecticut, Mignone was a dominant run blocker, team captain and all-state selection. But the only college scholarship offer he received was to join the Blue Devils of CCSU in New Britain, Connecticut.

Mignone put on 55 pounds over the next four seasons and became a consistent force in 38 career games. He was named the 2017 Northeast Conference Offensive Rookie of the Year and was a three-time NEC first-team selection.

“He’s probably one of the hardest workers I’ve ever coached,” Rossomando told the Danbury News Times in 2018.

While attending Central Connecticut State, Mignone met Katelyn Mann, a standout on the CCSU swimming team. The two soon began dating and have been together ever since.

In 2017, Mann was diagnosed with Hodgkin lymphoma. She has since made a full recovery and was awarded the Hartford HeathCare Courage Award in April.

Watching Mann preserver instantly changed Mignone’s perspective on what it means to fight.

“It’s hard to say anything’s hard when you watch someone close to you and someone you care a lot about go through something so hard,” Mignone said. 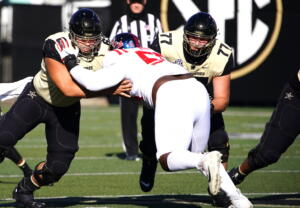 Mignone (6-4, 302) received an undergraduate degree in math from Central Connecticut. By his own admission, he grew a bit weary of that area of study, but he also didn’t want to pursue a post-graduate degree in social sciences, humanities or business either.

Vanderbilt not only provided Mignone a chance to play one more season of football, but also offered a program in data science. Mignone’s interest in sports analytics has sparked and he has signed up to take part in the NFL’s 2020-21 Big Data Bowl, where he’ll be challenged to uncover how to successfully defend passing plays with artificial intelligence and data analytics.

As for what the future holds, well, the analytics may have said a young man from Connecticut with not much of an option to play football past high school wouldn’t become a starting offensive lineman in the SEC. But Vandy is thankful Mignone defied the odds to thrive in the role given to him.

“I think I did a tremendous amount of growth from my senior year of high school to my freshman year. I think that environment (at CCSU) was perfect for me,” Mignone said. “I’m really happy that I went to Central Connecticut. That place is home to me – and a lot of stuff happened there. I did a lot of growing up physically and mentally there, which I think prepared me for coming to a new town, new city, new team, new season and new level.

“Football is Xs and Os and the game doesn’t change. But there was definitely some confidence I had to build upon as soon as I got here, especially to step on the field. It’s been a long, winding road and I had full faith in (Vanderbilt head coach Derek Mason and Rossomando) that we could have a winning season and I would help make a positive impact.”