LAS VEGAS – There was little Las Vegas glitter for the Vanderbilt bowling team Monday as the Commodores finished fourth in the Stormin’ Blue and White Vegas Classic.

Vanderbilt dropped successive best-of-seven Baker games to McKendree and Nebraska, respectively, after opening the morning with a hard-fought win over host Mount St. Mary’s. McKendree came out of the consolation bracket to beat Stephen F. Austin for the championship.

“We couldn’t find any momentum today,” Vanderbilt head coach John Williamson said. “We either seemed to make an errant first shot that put us in trouble or missed a makeable spare attempt. We were fortunate to get out of the Mount St. Mary’s match with a win but you just can’t beat good teams if you give things away.”

The Commodores survived a scare from Mount St. Mary’s in the opening bracket round. The Mountaineers paid no heed to the result of Friday’s 5-game Baker set, won handily by Vandy, and striking at will put the Dores in a deep, 3-1 hole. Vandy won Game 5 but the outcome looked bleak for the Black and Gold in Game 6 when back-to-back splits and opens in the 8th and 9th frames meant a weak total. 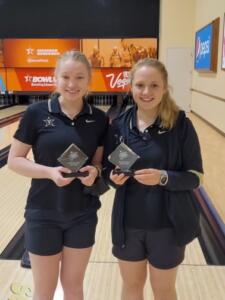 However, Mount St. Mary’s was having its own problems and when the dust settled in the 10th frame, Mabel Cummins needed to pick up a single pin spare for a 166-165 win, which she did.  Vandy had lane choice and took the left lane, which was producing  bigger scores and won Game 7 254-208.

The magic disappeared at that point. McKendree jumped out to a 2-0 lead, then watched Vandy tie it at 2-2 with a couple of strong scores before pulling away in the next two games to take the semifinal 4-2.

The consolation finals with Nebraska got off to a 211-171 win before the Huskers ran off four straight games to seize third place. There was an assortment of miscues contributing to the defeat including a surprising pair of 10th frame opens that ended any hopes of extending the match.

Caroline Thesier and Cummins were honored on the All-Tournament team on the basis of her fourth place individual finish Saturday.

The Commodores played a variety of combinations during the day. Freshmen Kailee Channell and Kaylee Hitt, lightly played so far this season, bowled in the lead-off and two-hole part of the day and handled the assignment well.

Vanderbilt is off for two weeks before heading to New Jersey for the Northeast Classic.