NASHVILLE, Tenn. — As improbable as it might read, John Egorugwu doesn’t take his own story for granted.

“I’ve been blessed and had some good luck, too, of being able to meet some really good people and some people who thought highly enough of me to have me come along,” Vanderbilt’s new linebackers coach said. “I’m very fortunate from that point.”

The son of Nigerian immigrants, Egorugwu starred as a linebacker at William Jewell College (once NAIA and now Division II) where he made 156 tackles and seven sacks in 29 career games. As an accounting and business major, he entered the workforce at a local bank he had interned at before graduation.

But as the weeks and months went by, the boredom grew. The itch to return to football increased.

Egorugwu began volunteering with his alma mater’s football program after his day job. He then took a position as a William Jewell admissions counselor in order to have a steady paycheck while coaching football on the side for a small stipend.

While he was traversing through Missouri and Oklahoma recruiting traditional students to the small school in Liberty, Missouri, he was also coaching the Cardinals in the evenings and on the weekends.

“One of the coaches on the William Jewell staff became a graduate assistant at the University of Missouri where a coach I had played for was the director of operations,” Egorugwu said. “They both validated the recommendation for me to take one of their graduate assistant positions they had created in the their recruiting room. 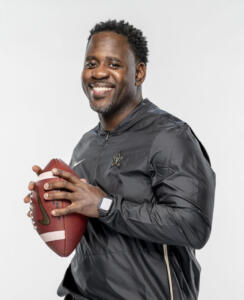 “The Baltimore Ravens reached out and asked if I would be interested in interviewing for an intern, low-level defensive position,” Egorugwu explained. “They basically just did a nationwide search looking for young guys for a couple of spots. They did this big search. They interviewed somewhere between 50-60 guys over the phone to start.

“I was one of the three at the end left standing so I ended up getting the job.”

For the next six years – two in Baltimore and four in Buffalo – Egorugwu soaked up all he could in the NFL while working primarily with the linebacker position group. And although he never was on the same staff of Vanderbilt defensive coordinator Jesse Minter, the two became acquainted through NFL events and mutual friends.

Egorugwu now sees similarities in what is transpiring in Nashville compared to what has formulated in Buffalo, where the Bills recently won an AFC East championship. He also recognized Vanderbilt head coach Clark Lea has an impressive resume as a linebackers coach himself.

“There were a lot of things we had to do to get that program going in Buffalo, but there’s such a huge satisfaction in knowing you can get something that’s on the ground level and get it up and running, to then see the success,” he said. “Being able to come in here and grow this thing from the bottom up and knowing what that looks like and being part of implementing the stuff that is going to impact this campus and impact our students, that’s attractive. 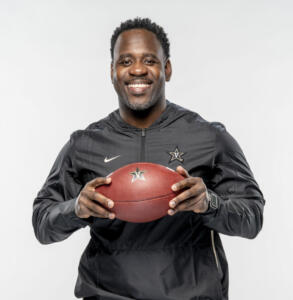 “It’s a challenge,” Egorugwu added. “It’s not easy. But I feel really comfortable with coach Lea and what his vision was for this place. It reminded me a lot of the vision coach (Sean) McDermott had when we first got to Buffalo. I know that can work. I know it’s successful. I know if you do it the right way you’re going to get what you want. Those are some of the big attractions.”

As Egorugwu begins to settle in on West End he’ll begin to form relationships with the Commodores playing the very same spot he did many moons ago in the heart of Missouri. And for him, he said his first step will be to build a solid foundation of trust with his student-athletes – he admitted one of his biggest challenges in the NFL was getting older, veteran players to trust a young coach.

One thing Vandy players will be able to trust is that Egorugwu got to where he is through hard work and perseverance and that they will always know where they stand with their new coach.

“The biggest thing for me is just transparency. I’m a little bit of a millennial myself and I always like constant feedback,” Egorugwu said. “That’s always going to be the biggest thing. I want the guys to know exactly where they stand and how they’re doing. If they ever see a depth chart and don’t understand why they are where they on the depth, that’s my fault.”