COLUMBUS, Ohio — Two titans of NCAA bowling traded momentum back and forth in a classic four-hour mega-match before the Vanderbilt Commodores finally, reluctantly succumbed to an onslaught of strikes from the McKendree Bearcats.

The defeat, by a tight 2-1 margin, in the national semifinal ended the championship dreams of a gritty Vanderbilt team that competed to the last frame and broke the hearts of the three graduating Commodore seniors – Angelica Anthony, Angelique Dalesandro and Samantha Gainor. 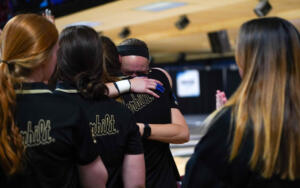 Vanderbilt won the first mega point, taking the traditional game by a comfortable 983-932 margin. For a moment, the Vandy faithful were wondering if the Dores could sweep the points as they led the pin count into the fourth game of the 5-game Baker set.

That was before McKendree jettisoned into the stratosphere with a six-game run of 245-235-235-238-244 and 226. The Commodores were posting solid scores more than 200 themselves but could not keep that torrid pace. In the end, that streak was the difference between the semifinalist trophy and advancing to the national championship game.

“I’m pretty emotionless right now, it hasn’t hit me yet that it’s over,” Anthony said. “There are things I wish I could change but it’s gone and out of my control. We were bowling well, there’s nothing we could do when they are stringing strikes like that.”

McKendree was the tournament’s No. 1 seed and with that came a significant perk – lane choice. Sometimes that is a non-factor – Saturday it played a role as the left side – lane 25 – was scoring higher all morning.

“You can’t play defense and the left lane was nicer,” Vanderbilt head coach John Williamson said. “They had lane choice and they were 80-over on the left side the last two Baker games. We didn’t do as good a job taking advantage of the left lane when we had it so we could try to weather the storm. We battled and fought despite their big run.”

Indeed, while the Bearcats were on this tear, Vanderbilt didn’t have a single game of its own under 200, averaging a solid 210.

“They were making more consistent shots,” Williamson acknowledged. “They altered their Baker rotation and their lead off was striking nearly 70 percent of the time so they were starting with a double or triple nearly every game. We didn’t have quite that consistency at the top. It puts you in a difficult spot when you always are behind. We thought as the match wore on we’d have a better chance.

“It’s hard to end but we bowled pretty good today. McKendree bowled really good. You can’t stop your opponent. If you play the what-if game you might say, ‘If we bowled like this (Friday) we wouldn’t have been here today.’ But you can’t think like that. We were down three and made a little run. We had a grit and fight that I hope continues in our program.”

Williamson wanted to salute his trio of seniors for the talent they brought to the program and the leadership they extended.

“All our seniors had their moments this year,” Williamson said. “At different points in time you could rely on them for consistency, both physical consistency and what they brought to the settee every day. They were selfless, they shuffled in and out of the lineup and didn’t pout and that’s hard to do. They will leave a hole from a leadership standpoint.”

Their final comments reflected their strength.

“Today was better than (Friday),” Dalesandro said. “We all realized that we needed to be different. Today we were focused on fighting and bowling our best, executing and being gritty. That’s been our word all season. We showed that in those last two games, it just didn’t go our way. I came in and wanted to execute shots.

“When you compete at this level I just kinda shut my mind off and hope for the best, as long as I hit my mark and trust what our coaches say good things will happen.”

Said Gainor: “We fought hard today and that’s all you can ask for. “All you can do is keep plugging away and hope you get some breaks. It’s not over until it’s mathematically over.”

In the end, as McKendree was closing the door on their championship dreams, one’s attention turned to these seniors.

Anthony admitted feeling numb. Tears were streaming down the faces of Dalesandro and Gainor.

All three have big lives waiting for them – Anthony will soon start nursing school at Vanderbilt and one day will be comforting someone’s grandpa or child. Dalesandro and Gainor have jobs lined up and their fortunate employers will reap the benefits of their passion for excellence.

Anthony got subbed in the deciding game and struck in the ninth. Gainor wiped away tears and doubled in the 10th, just for old times sake. It was a passionate scene.

They weren’t bowling for professional contracts, for glory in the morning newspapers or even widespread recognition within the vast student body.

No, instead they were bowling for the reasons that makes intercollegiate athletics worthwhile and valuable. They bowled for their teammates, to represent their school, to achieve their goals and the pride and self-satisfaction of seeing a priority through to the end.

“We fought hard today and that’s all you can ask for,” Gainor said. “All you can do is keep plugging away and hope you get some breaks. It’s not over until it’s mathematically over. You will never get to do this after you graduate (represent Vanderbilt again). I like doing it for my teammates and giving it one last shot. Bowling is just different. It’s what I came here to do and I was lucky to have another year.”

Vanderbilt concludes a memorable season with a record of 93-41, a second straight Southland Bowling League championship and a title at an NCAA Regional.