FRANKLIN, Tenn. — From start to finish, really, the Commodores left little to doubt during three rounds at the Vanderbilt Legends Club.

John Augenstein, Matthew Riedel, William Moll, Reid Davenport and Harrison Ott put together one of the better 54-hole team performances in Vanderbilt golf history Sunday-Tuesday during the Vanderbilt Legends Collegiate. Their three-day total of 813 is second only to an 811 scored at the 2012 Mason Rudolph Championship.

“We got a great group of guys with a lot of talent and a lot of competitive attitudes,” Augenstein said. “That can surely take you a long way.” 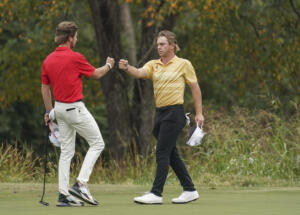 Augenstein took charge Tuesday with a 3-under 68 to finish 13-under for the tournament and alone in second place. The fifth-year senior climbed the leaderboard while teammate Riedel slipped ever so slightly after an impressive first 36 holes.

Still, that duo both finished in the top five and every Commodore was inside the top 31 as Vandy recorded 63 birdies, 13 rounds under par and two eagles.

“We’re still a young team,” Vanderbilt head coach Scott Limbaugh said. “Without getting to play in an SEC Championship (in the spring), it had an SEC championship feel. When you’re playing great teams like in the SEC, they’re going to push. You got to want to push back – and our guys did that.”

Part of Vanderbilt’s week included a 265 team total Monday in the second round, a program record. It finished 39-under when all was said and done – and not even a 13-under by Georgia during Tuesday’s final round could overtake the Dores.

The victory was Limbaugh’s 24th during his Vanderbilt tenure and the 30th team win for the Commodores since 2001.

“Our kids were focused,” Limbaugh said. “They had a focused, we’re-going-to-do-this kind of mentality. I just thought it was great for these guys to be able to do that.” 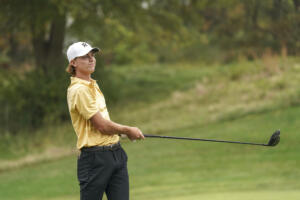 Limbaugh noted how impressed he was with the play of Riedel and William Moll (8-under, tied for 11th), both of whom are sophomores. He also lauded Ott’s play and praised the team captain’s ability to compete despite not having his best swings.

Vanderbilt will need someone to step up again Nov. 9-10 at the Jerry Pate National Intercollegiate in Birmingham, Alabama. That event precedes the Masters Tournament where Augenstein will be competing and that means the Owensboro, Kentucky, native won’t be in the Vandy lineup.

But for now, the Commodores will relish in the glow of another trophy.

“We’re going to enjoy this, enjoy it for a day or two, then we know what’s at stake. We got one more of these and we got an opportunity and somebody gets to step up at the next one because (Augenstein) won’t be there,” Limbaugh said. “We’ll finish the fall the right way, but got to learn from some things we’re not doing as well – and also be excited about this because it’s something to be excited about.”