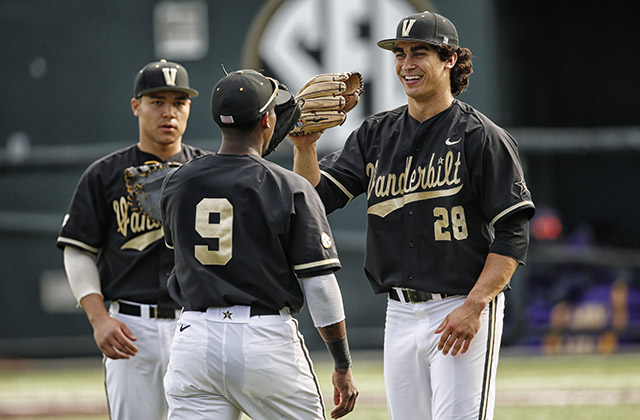 Most fall afternoons, 34 baseball players, four student managers, three assistant coaches, a strength coach, an athletic trainer, a director of operations and an equipment manager crowd into a classroom overlooking Hawkins Field. All eyes are on Head Coach Tim Corbin.

Before Corbin leads his team onto the diamond for practice, they all spend an hour in that classroom, and they usually don’t talk about baseball. Instead, he exposes his diverse squad to world concepts that will be useful on the field.

The makeup of his team is itself a teaching tool.

In his 12 years at the helm of the Commodores, Corbin says this bunch is his most diverse.

“It is done purposefully to match the university and really to match our country,” he says. “It is a dynamic that goes hand in hand with educating kids Ã¢â‚¬â€ to get players from all over the country and focus on Tennessee, as well. It is really good for perspective. What I think it does is widen their focus.”

Left fielder Ro Coleman grew up in the south side of Chicago where gangs were prevalent. Third baseman Xavier Turner overcame troublesome early years in high school in Sandusky, Ohio. Nine players are from Tennessee, including six from within an hour of Nashville.

Right-hander Carson Fulmer’s father was the assistant attorney general of Florida. All-American pitcher Tyler Beede, also known by the rapping moniker Young Beedah, is from the suburbs of Boston. He turned down $2.5 million to come to college before he goes on to pursue his dream of pitching in the big leagues.

“It makes it fun,” Beede said. “We don’t click together, but at the same time we all mesh. We have different personalities, different backgrounds. It works out. It’s weird.”

Corbin also is conscious of diversity when selecting his student managers.

Perspective can be gained from watching Josh Ruchotzke, a quadruple amputee from Illinois, and Michael Portu, a Minnesota native who has had four heart surgeries, prep the field for practice.

“Mike Portu’s situation started making me think of having that position with someone that has overcome adversity physically,” Corbin said. “If you overcome something physically, you’re overcoming it mentally, too. Josh is one of those. That position in itself is so servant-oriented, and our kids are so understanding of that. They give it the thanks it deserves. I can’t remember a program where those kids are so inclusive inside the inner circle. They’re a teammate. That’s the way we want to operate.”

Growing up in Wolfeboro, N.H., Corbin says he was “pretty sheltered” in the summer resort town with a population of 6,000.

But his parents broadened his horizons. He was urged to get a job at a young age and started bussing restaurant tables when he was in eighth grade.

His real education, however, came from traveling around the state and into Boston with his father, Jack, who worked in the automotive parts business. In the big city and in warehouses, Corbin was exposed to different cultures and a blue-collar work ethic.

He earned an appreciation for the working man and the value of a dollar Ã¢â‚¬â€ a concept he stresses to his team.

“Dealing with adults was what prompted my thought process,” he said. “Communicating with adults at a young age Ã¢â‚¬â€ I think that is very important for kids. There is a comfort level and a communication level that exists when that happens with young kids.”

Ro Coleman has been at ease ever since he stepped onto campus in August.

The 19-year-old admits he was shy at first. But his teammates have helped open him up.

“As soon as I was here, I felt like I was home,” Coleman said. “I didn’t feel uncomfortable with any of the guys. Ã¢â‚¬Â¦ We all have the same common goal to achieve Ã¢â‚¬â€ winning a College World Series. But I think just how diverse this team is, the different backgrounds, to bring new experiences to people they never experienced before Ã¢â‚¬â€ I think that is what makes us more special than any other program.”

Ro, who stands 5-foot-5, grew up in a “rough” environment. Gangs and violence were part of his neighborhood in Chicago. His father, Roynal, who played minor league baseball, was incarcerated for three years, starting when Ro was in eighth grade.

“It was very tough,” Ro said. “It was a time for me to grow up and mature. It motivated me more to do better. It helped me become the man I am today.”

Determined to be a role model for his younger brother and the first in his family to earn a bachelor’s degree, Ro committed to Vanderbilt immediately when Corbin offered.

“This is a dream school,” Ro said. 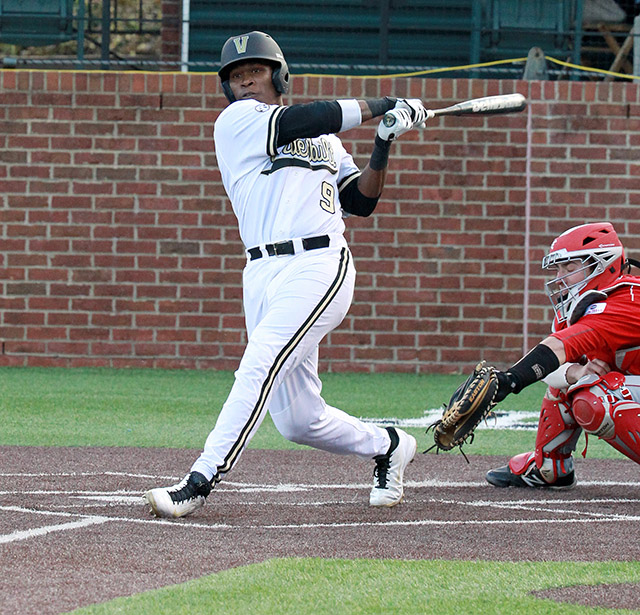 Turner jumped on the opportunity, too.

Coming from a similar environment as Coleman, Turner said he would never have imagined five years ago that he would end up at Vanderbilt.

“Five years ago I didn’t have my head on straight,” he said.

Surrounded by drugs and crime, Turner said he nearly made some bad decisions. But the turning point was “asking myself if I wanted to be in jail or if I wanted to go to college and play baseball that I love?”

The 6-2, 220-pounder played on the same AAU team with Beede and used baseball as a way out of Sandusky.

Turner eyed Vanderbilt for a long time. Corbin believes the success of previous African-American players in the program, such as Tony Kemp and David Price, has opened recruiting doors.

But he also knows the university offers an “insurance policy” not found elsewhere in the SEC.

“I think the overriding factor is that this is life-changing for them,” Corbin said. “It is an insurance policy for those kids. It is an opportunity to get the best possible education. And, ‘Wait a minute, I get to play baseball, too?’ If financially they can afford it, it is tough for them to pass up.”

To Beede, the rewards he’d reap from living the college experience were priceless Ã¢â‚¬â€ literally. Even when the Toronto Blue Jays offered him $2.5 million to sign after drafting him in the first round in 2011, Beede stood firm.

“It certainly has been one of the best decisions I’ve made, and I never regret it,” he said. “It is because I get to be around this group of guys that is diverse and opens you up to new things each day. I’m certainly glad I was put into this situation with these guys. I’m happier than ever. You can set aside all the baseball stuff Ã¢â‚¬â€ it has been the best decision I could ever make.”

Beede has fit right in with the Commodore lineup.

The hard-throwing right-hander has an affable personality. He’s been a recurring star in videos on the university’s website, asking fellow students if they had ever heard of Tyler Beede (most said the name sounded familiar) and if they would turn down $2.5 million to come to Vanderbilt (most said yes). He also has translated questions and answers for fellow starting pitcher Jared Miller, who is a Spanish minor from Indiana and one of three people on the team, along with Conde and strength coach and former Commodore David Macias, who can speak the language fluently.

Beede, aka Young Beedah, posted a track to YouTube called “Boston Strong.” The song, which he wrote, was played during the first Boston Red Sox game after the Boston Marathon bombings when Jarrod Saltalamacchia walked to the plate.

But Beede has competition from within the Vanderbilt dugout. He says Wiel might be the best on the team. Infielder Tyler Campbell, from Portland, Ore., is “gifted.” Outfielder Johnny Norwood from New Jersey goes by the alias “Dice.”

“I think I am the only one that has made a legit song,” Beede said, laughing. “We just have fun. We are a fun group of guys. I think music is one outlet we enjoy expressing our thoughts through.”

Before each game, spiritual leaders Brian Miller and Will Cooper, both Tennessee natives, lead a team prayer. The prayer session is not mandatory, and not all join in. But being respectful and knowledgeable of others’ beliefs is important to Corbin, who often brings Lance Brown of Who U With Ministries to speak to the team.

“It just means you’re understanding of someone else’s faith and know parts of that faith can directly apply to yours,” Corbin said. “And certainly not being judgmental. We have kids down there that are tremendous kids. The faith part of it is they may have faith in their own little element. When it comes to group faith they might not want to join in. But that’s OK.

“Everyone understands it, and no one holds it against them.”

Wiseman, a native of Mansfield, Mass., is half Jewish.

He was raised to appreciate Judaism and Christianity, going to synagogue and church and celebrating Hanukkah and Christmas. Living near Boston, he said, in a liberal environment opened his mind.

“When I came down here there were a lot of kids who had never met a Jewish kid before, which is so funny to me since in the Northeast there is a very high Jewish population,” Wiseman said. “It was different.”

Sharing their stories and backgrounds often comes up in those classroom meetings or in the locker room or during fall getaway rafting trips to the Ocoee River.

It’s not unusual to see the team hanging out at the baseball complex or around the McGugin Center for hours Ã¢â‚¬â€ even when there isn’t a game.

“It is not a moment thing,” athletic director David Williams said. “Those kids leave, finish what they’re going to do here and then come back. There is that sort of lifetime connection. David (Price) comes back. Pedro (Alvarez) comes back. Mikey (Minor) comes back. They seem to have a glue together that Tim puts together.”

Corbin says he’ll continue to “blend” all backgrounds, races and cultures when compiling his team. “That typically equals success if they buy into it,” he said. He promises next year’s team will be even more diverse than the 2014 squad.

Besides, to Corbin and his crew, the only colors that matter are black and gold.

“Once we get on the field, we’re all brothers,” Wiseman said. “You could be from Mars and it wouldn’t matter.”