VESTAVIA HILLS, Ala. — A thrilling day of high-level golf ended Tuesday’s final round of the Jerry Pate National Intercollegiate in Vestavia Hills, Alabama, where Auburn took home the team title after a three-way tie after 54 holes.

Vanderbilt, Georgia and Auburn all finished 19-under for the tournament and headed to a playoff on hole No. 18 at the Old Overton Club where scores from all five golfers from each team were counted. Auburn carded even par for the hole and escaped with a one-stroke win over both the Commodores and the Bulldogs.

“I honestly couldn’t be happier with this group,” Vanderbilt head coach Scott Limbaugh said. “They chose to have courage this week and we grew up as a team. It was important to us to finish the fall the right way and I think we did a good job of that.  It was a great battle today and I thought all our guys fought until the end. All our guys stepped up at different times this week and today which is great to see.” 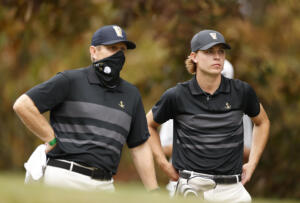 Vandy had its toughest round of the tournament Tuesday as it shot 1-under par. The Dores had finished 10-under Sunday and 8-under Monday to take a two-stroke lead over Georgia going into the final round.

But Auburn surged Tuesday to shoot 4-under and then claimed the team trophy on the playoff hole.

Vanderbilt’s William Moll finished tied for fourth with an 8-under 202. It was the second top-six finish for the sophomore this fall – he also tied for 11th at the Vanderbilt Legends Collegiate in October.

Reid Davenport matched Moll’s 1-under Tuesday to finish alone in ninth with a 6-under 204. Matthew Riedel came in tied for 19th at 1-under and Michael Shears was 1-over for the tournament.

Jansen Preston made his Vanderbilt debut and shot a three-day total of 214 to end up 42nd with a 4-over. 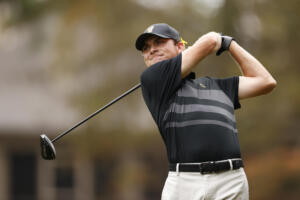 “Reid and William were both really good all week long and played with a ton of consistency. William hit two great shots on 18 and had a putt to win in regulation that just didn’t fall,” Limbaugh said. “I’m really pleased with how Jansen finished today – I think that says a lot about his competitive character. Matthew and Michael played solid as well and it was great having all five guys in it.

“These experiences provide such good growth opportunities and I know it will make us better moving forward. The value of one shot is something we talk about and it’s great to be in that position today.”

Jackson Suber of Ole Miss and Ford Clegg of Mississippi State each took home low-medalist honors with a three-day total of 198, 12-under par.

Tuesday’s round was the final one for Vanderbilt before looking ahead to the spring season. Dates and events for the 2021 slate will be announced at a later time.

“First of all, we are very grateful that we were able to compete all fall. Our guys did an outstanding job adapting and being responsible which I’m very proud of,” Limbaugh said. “I thought we had a good fall with different guys stepping up each week.
“William had a great fall season which is big for us moving forward. It’s exciting to see the depth and we also have a lot of things we need to improve on this offseason. We have to continue to take pride in our performance so we can be the best team that we can be.”
Powered by