LANSING, Mich. — Vanderbilt made it look easy in rolling past Arkansas State 2-0 to win the NCAA Lansing Regional championship Saturday.

The win punched the Commodores’ ticket to next week’s Final Four in Columbus, Ohio, where they will meet surprising Fairleigh Dickinson in the first round.

Vanderbilt sailed to comfortable wins in both the traditional game (982-926) and 5-Game Baker set (1,110-1,017) in what was a surprisingly tension-free match against the talented Red Wolves, who were national runners-up a year ago. In both points, Vandy jumped out to leads and didn’t look back.

“We came in to this regional knowing it’d be a dog fight with three of the top nine teams in the country,” Vandy head coach John Willamson said. “We knew there’d be no gimmies. We were the No. 1 seed overall in 2019 and lost in the first round to an unranked team. Luckily our kids came to play.

“The mega-match format is long in one sense but it’s still pretty short. If you are not throwing it well and lose that first point, if you don’t get it mentally corrected, that Baker point comes very hard. If you can get someone back-pedaling it’s very hard to stop.”

Williamson likes the team-first mentality of his squad.

“We have a pretty deep group,” he said, “and we’re trying to play people who are throwing it well so if someone’s not throwing it well we’ll go with someone else. Right now we have a group that doesn’t care who gets the credit. As long as we stay with that mindset — that if I don’t have it today someone else does and I’m going to stay involved with positive energy. We’ve gone far and we can go farther.”

Balance and quality depth were once again key factors in the Commodore attack. While seniors Angelica Anthony and Angelique Dalesandro set the pace in the traditional game with 244 and 206 scores, respectively, the entire rotation contributed solidly in the decisive Baker point.

Anthony sizzled in the traditional game, twice getting four bull’s-eyes in a row until splitting in the 10th.

“I felt really calm today,” Anthony said. “I had my nerves under control and that’s why I competed well. I trusted my intuition and felt very positive. We all had a good look and it felt right so I didn’t want to distract my mind with other thoughts other than what was in front of me.”

Dalesandro continued her hot hand, picking up from Friday when she returned after missing two months with a broken foot. The only difference was Saturday she was in the starting rotation as opposed to coming off the bench.

“It was the same process as (Friday),” Dalesandro said, “just stay in the moment. It helped me having Angelica doing so well in front of me. I thought just follow her and it’ll end up in a good thing.”

The impressive regional title was Vanderbilt’s second straight spotless postseason triumph. The Commodores won the rugged Southland Bowling League two weeks ago with a 4-0 march through the ranked opposition and were 3-0 in Michigan with two wins over Arkansas State and one over Alabama State.

“We’ve been in a similar situation at the Southland having a morning break and playing in the afternoon,” Williamson said. “We learned from that experience and we’re much better today than we were at the Southland; we came out and executed and made good shots.”

Vandy’s berth in the Final Four was not automatic by any means since other regional top seeds Sam Houston State and Nebraska were ousted and McKendree survived in a best-of-seven tiebreaker with Mount St. Mary’s.

Other teams heading to Columbus are Fairleigh Dickinson, which upended defending champion Nebraska, and Stephen F. Austin, a winner over Louisiana Tech. Both FDU and SFA were thought to be late inclusions in the original field of 16 and both have won the national championship twice in their histories.

Vanderbilt will play FDU in the curtain-raiser at 8 a.m. CT.  Friday’s afternoon round will be at 2 p.m. CT.

The NCAA Championship is Friday and Saturday at Wayne Webb’s Columbus Bowl. The format will be similar to the regional with a double-elimination mega-match although the championship will be a best-of-seven played at 7 p.m. CT Saturday on ESPNU. Other matches will be live-streamed by the NCAA. 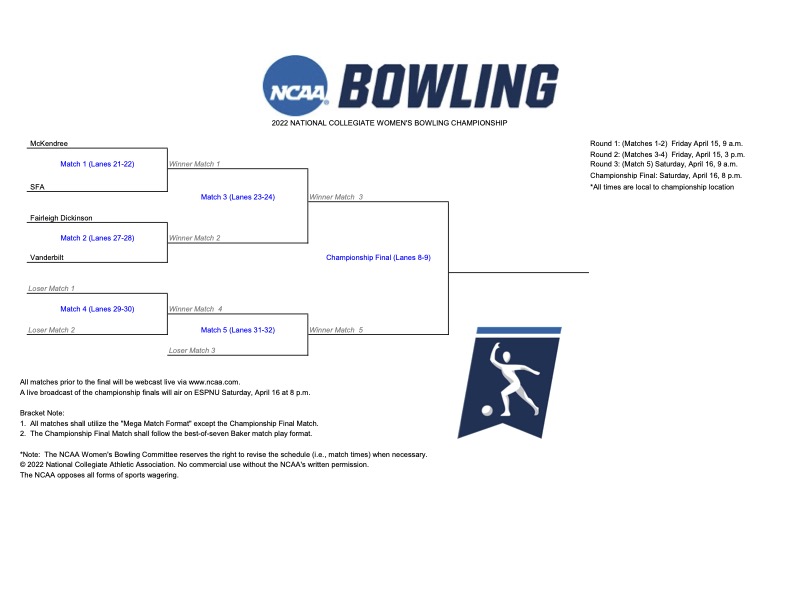