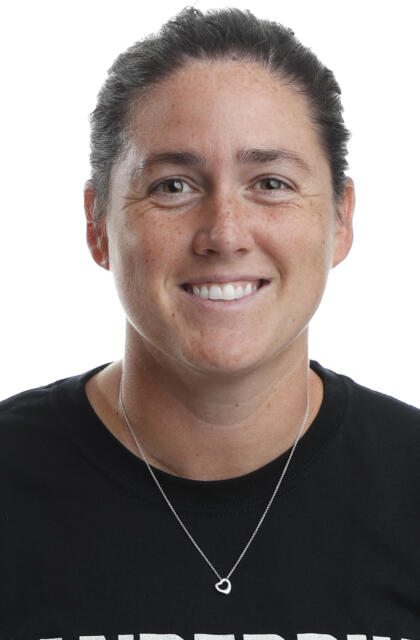 Joining head coach Darren Ambrose at Vanderbilt since the start in 2015, the 2021 season is the seventh for Kelly Keelan. A goalkeeper and forward herself in college, Keelan’s works with Vanderbilt’s keepers and attackers.

Helping bring a championship mentality to the program, Keelan has helped guide Vanderbilt to SEC trophies in three consecutive seasons. Starting with the 2018 SEC regular-season crown, the Commodores won the 2019 SEC East title before going on to claim the 2020 SEC Tournament championship in 2020. Along the way, Keelan has helped the Commodores to 14 wins over nationally-ranked opponents through the first six seasons, including four victories over top-10 teams. For comparison, the program had just eight wins over ranked foes before the arrival of the new staff in 2015.

Helping Vanderbilt to 70 victories thus far, the Commodores have averaged 13 wins per season since 2017. With a focus on the keepers and offensive side of the ball, she has tutored players the likes of Haley Hopkins, who is one of the best goal scorers in program history and was twice named an All-American in three seasons with the program.

With standout tandem Lauren Demarchi and Taiana Tolleson graduating after the 2019 season, Keelan’s work in 2020 with goalkeepers Sarah Fuller and Sophie Guilmette helped the Commodores win the SEC Tournament. After fighting through a 1-3 start to the season with three one-goal losses, Vanderbilt went on to win seven of its last eight games on the way to the SEC title, the first tournament title for the Commodore program since 1994.

In the SEC Tournament, Vanderbilt scored an SEC Tournament record 14 goals while allowing just four. Along the way, the Commodores defeated Mississippi State 4-0 in the second round before taking out top-15 programs in second-seeded and 13th-ranked Tennessee 4-2 in the quarterfinals, third-seeded and eighth-ranked Texas A&M 3-1 in the semifinals and top-seeded and sixth-ranked Arkansas 3-1 in the final. Keelan’s keepers posted four shutouts in 16 games, but came up big when it mattered most with two of the three shutouts in the final three games of the fall regular season the third in the SEC Tournament before closing the shutout slate with a scoreless draw at No. 7 Duke.

Thanks to momentum from the SEC title, Vanderbilt went on to earn its best national ranking in program history, checking in at No. 4 in the nation. With the 2020 NCAA Soccer Championship moved to April and May of 2021, Vanderbilt had earned the automatic bid to the tournament thanks to the SEC title but it wasn’t done there. Punching its ticket to a fourth-straight NCAA Tournament to mark the second-longest run of consecutive tournaments in program history, Vanderbilt put an exclamation point on the journey by garnering its first-ever NCAA Tournament seed at No. 16 and reached the second round of the tournament for the third time in four season.

Keelan and the Commodores brought home an SEC East Divisional title in 2019. With Demarchi and Tolleson splitting time in goal, they combined for 11 total shutouts to mark the third-most in a season in program history. The Commodores only allowed 13 goals all season, a figure that stands as the second-best goalkeeping season in Vanderbilt history.

The 2018 Commodores won the SEC for the first time since 1994 and third regular season championship in program history. Reaching the NCAA Tournament, Vandy also hosted its first postseason game since 2005 and reached the second round.

The 2018 goalkeepers had one of the better seasons in Vanderbilt history. They posted 10 shutouts on the season and Demarchi posted the second-best goals against average in Commodore history with a 0.55 mark.

The 2017 Commodores reached the NCAA Tournament for the first time since 2006 and won their first NCAA Tournament match since 1998, using three goalkeepers over the course of the season. Redshirt senior Kaitlyn Fahrner led the SEC with an .831 save percentage as VU’s primary keeper starting 16 of 22 contests and posting a 9-4-1 record. Fahrner’s 0.99 goals against average on the season was the fifth best single-season GAA in school history, and her 1.13 career GAA over two seasons as a Commodore after transferring from Oklahoma places her fourth all-time in the program record books.

During the 2016 season, the Commodore goalkeepers pitched four shutouts including a 2-0 home win over No. 14 Texas A&M. Fahrner and Demarchi saw a majority of action in net for the Dores. Fahrner led the SEC in saves per game with 5.29 and was fourth in save percentage with .804. Demarchi made five starts during her freshman season. She made 19 saves and picked up her first collegiate victory in a 4-1 win over Ole Miss.

During her first season at Vanderbilt, the Commodores allowed only 23 goals, the fewest since the 2006 season. Christiana Ogunsami started all 21 games for the Dores and she notched six shutouts, including a 1-0 win over No. 12 Ole Miss and a 0-0 draw with No. 20 Kentucky. Four of the six shutouts came against SEC competition.

Prior to joining the Commodores in March of 2015, Keelan spent the 2014 season as an assistant at Georgetown but served the previous two years at Penn under under Ambrose and with current associate head coach Ken Masuhr.

In her lone season at Georgetown, the Hoyas allowed just 24 goals while reaching the second round of the NCAA Tournament and the BIG EAST Championship Game. She coached All-Northeast Region goalkeeper Emma Newins, who was named to the All-BIG EAST Second Team as well after posting nine shutouts, 71 saves and a 1.19 goals-against average.

Prior to Georgetown, Keelan’s two seasons at Penn were largely successful. In 2013, the Quakers finished the year 12-1-4 overall, setting a program record for fewest losses in a season. Penn also shut out 12 of its 17 opponents and allowed just eight goals all season. The women went 5-1-1 in the Ivy League to finish in second place, and at the end of the season three players were named first-team All-Ivy, including one who was a National Soccer Coaches Association of America (NSCAA) All-America (just the second All-America in program history) and the Ivy League Defensive Player of the Year.

A native of Broomall, Pa., Keelan went to Penn after two seasons as an assistant coach at Ohio University working with the Bobcats’ goalkeepers and field players in skill development while also assisting with practices and other day-to-day operations. Under Keelan’s supervision in 2010, the Ohio defense tied program records for fewest goals allowed (21) and shutouts (six).

Keelan enjoyed a standout college career at George Mason. During her four years with the Patriots, she played both goalkeeper and forward, appearing in 71 games with 40 starts. As a forward, Keelan amassed 21 goals and 11 assists for 53 points. In goal, she tallied 58 saves and had a 1.39 goals-against average for her career. Keelan also served as a team captain and was named All-Colonial Athletic Association. As a junior in 2008, she led GMU in the amazing combination of goals, points, saves and shutouts. In 2007, she led the Patriots in goals, assists, points and shots.

In addition to her career at GMU, Keelan also played with the Philadelphia Liberty of the WPSL (Women’s Premier Soccer League) and was a keeper in England’s U-19 National Pool in 2006. She also played for the Philadelphia Charge, a WUSA youth team, and on the West Chester United club team for seven years.

Keelan holds an NSCAA Premier National Coaching License and an NSCAA Goalkeeping Coaching License. She completed her bachelor’s degree in Health, Fitness and Recreation Management in May 2010 at George Mason, and then earned a Master’s of Science degree in coaching education at Ohio.