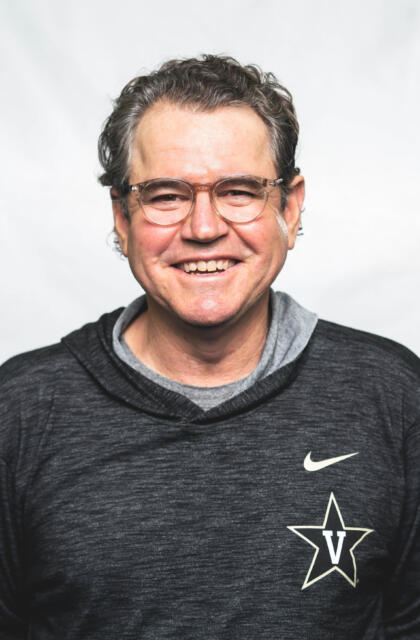 Now in his 17th season as head coach of Vanderbilt’s men’s tennis program in 2021-22, Ian Duvenhage has made Vanderbilt a mainstay in the rankings and a consistent contender in the NCAA Tournament field. The team’s rise has come as Duvenhage has crafted what is considered one of the hardest working and most respected programs in the country.

In 2021, Duvehage won his 200th match at Vanderbilt with a 6-1 defeat of Belmont in the season opener on the way to a four-match winning streak to start the campaign. The milestone would’ve been reached in 2020, but the COVID-19-shortened season was cut short with Vanderbilt winning seven matches including an SEC victory over Auburn in the early going after beating Indiana in the ITA Kickoff Weekend Tournament.

In 2019, the team concluded the season earning a 16-12 overall record, capping four victories over SEC foes. The Commodores conquered nine victories at home and held a six-match winning streak. In tournament play, the Dores reached to the second round of the SEC Championships and advanced to the NCAA Super Regionals, clinching a 4-3 victory over Notre Dame. The Dores wrapped up the season falling to Ohio State in the NCAA Tournament. Individually, Duvenhage coached senior Cameron Klinger and junior Billy Rowe advance to the NCAA doubles tournament and earn All-American status.

In 2018, Duvenhage led his team to a 19-9 overall season earning seven wins over SEC opponents and making appearances at both the SEC Tournament and NCAA Tournament. The Dores advanced to the quarterfinals of the SEC Tournament and the Round of 32 at the NCAA Tournament. Only dropping two home matches in the 2017-18 season, Duvenhage along with assistant coach Ryan Lipman led the Dores to a season-high top-20 ranking coming in at No. 17 with multiple players earning ITA and SEC honors throughout the 2017-18 season. Senior Daniel Valent earned the Ohio Valley Regional Senior Player or the Year Award and freshman George Harwell earned the Ohio Valley Regional Rookie of the Year Award while junior Cameron Klinger earned his second All-America honor.

In 2016, Duvenhage’s squad finished the year with a 17-14 overall record and made the program’s 15th NCAA tournament appearance. The Dores went 6-6 in the SEC, including a 4-3 statement win over then-No. 7 Texas A&M. In all, Vandy knocked off four top-25 teams and had a pair of All-American doubles players in senior Rhys Johnson and freshman Cameron Klinger. Klinger is the youngest player in the program to earn All-American honors.

The 2015 campaign was incredibly successful as Vanderbilt finished fifth in the SEC with a record of 8-4 against league teams. With a 20-8 record, Vanderbilt dropped just one home match the entire season. The Dores competed in their fifth-straight NCAA tournament, falling 4-0 in the second round to host Ohio State. Individually, Vanderbilt had immense success as Duvenhage was named the 2015 Ohio Valley Regional Coach of the Year. In addition, Gonzales Austin was voted the SEC Player of the Year and Ohio Valley Player of the Year. As the No. 1 doubles team for over a month, Austin and Johnson earned All-American honors. Austin capped his career earning his fourth All-American title in singles and ranked No. 7 in the country. Freshman Daniel Valent earned Ohio Valley Player to Watch honors, SEC All-Freshman team and a spot on the Second Team All-SEC.

During the 2014 Commodore campaign, Duvenhage secured his 100th career win with the Dores in a 6-1 victory over Ball State. At the conclusion of the 2014 season the Commodores were ranked No. 20 by the ITA, the second highest finish in Duvenhage’s time at Vanderbilt. The Commodores compiled an 17-11 overall record, and 5-7 mark in SEC play on the way to hosting NCAA Regionals for the second year in a row and advanced to the second round. Vanderbilt also hosted the SEC Tournament, advancing to the semifinals for the first time since 2004. Individually, Gonzales Austin and Ryan Lipman became the first Commodore players to earn ITA All-American honors in doubles and also became the first to earn both singles and doubles All-American honors in the same season.

The 2013 season went down as the most successful in Duvenhage’s first eight seasons. The team finished with a record of 18-11 and made it all the way to the Sweet 16 of the NCAA Championships before falling to the top-ranked UCLA Bruins. The Commodores finished the season ranked No. 15 by the ITA, their highest ranking since finishing No. 2 during the 2003 season. Vanderbilt’s 18 wins and Sweet 16 appearance were also season bests, dating back to that same 2003 squad. One year after sitting out due to injury, redshirt junior Ryan Lipman became Duvenhage’s first ITA All-American, and first for VU since Chad Harris and Bobby Reynolds in 2003. Along with Lipman, Gonzalez Austin and Kris Yee each earned All-SEC accolades.

The 2012 season saw Duvenhage’s squad finish 8-16, but still making it to the NCAA Tournament for the third-straight season. The Commodores were without standout Ryan Lipman for the whole season due to injury. Charlie Jones was called upon to pick up the slack and he delivered for the short-handed Commodores. Jones had a great senior season, even making it to the NCAA Singles Championship. Jones earned All-SEC Second Team honors, while true freshman Gonzalez Austin was named to the SEC All-Freshman team.

In 2011, Duvenhage’s team finished 13-11 overall, making its way into the NCAA Tournament. He had several of his team honored by the SEC, including Ryan Lipman, who was named to the All-SEC First Team and was nationally ranked by the ITA in the preseason poll for the 2011-2012 season along with teammate Charlie Jones.

The 2010 season was a banner year for the Commodores on many fronts. Following a 5-17 campaign in 2009, Vanderbilt more than doubled its win total in 2010 by finishing 13-11 overall en route to setting many new bests in the Duvenhage era. Those bests included five SEC wins, which Vanderbilt had not accomplished since 2004 and a three-match win streak in SEC play for the first time since 2003. Vanderbilt achieved those feats despite playing one of the most challenging schedules in the country for the second-straight year. The schedule included matches against three of the Final Four teams and both NCAA finalists. In total, nine of Vanderbilt’s 11 losses came to teams ranked in the top 30, and all 11 came against teams ranked in the top 50.

With 36 years of coaching experience, Duvenhage is one of the most experienced coaches in the collegiate ranks and his experience has helped elevate the play of the Commodores. Also in 2010, Duvenhage helped Vanderbilt freshman Ryan Lipman make history by being named Ohio Valley Rookie of the Year, SEC Co-Freshman of the Year and First Team All-SEC. No Vanderbilt player had ever received those accolades as a freshman before Lipman. Lipman was also selected for the NCAA Singles Championships, where he advanced to the second round.

Before Lipman, the previous player to make the NCAA Singles Championship was 2008 graduate Ryan Preston. Duvenhage helped Preston become just the fourth player in school history to earn three-All-SEC honors after guiding him from the No. 5 singles slot in 2005 to the No. 1 slot each of his final three seasons. Preston’s success helped land him an invitation to the NCAA Singles Championship three years in a row.

In 2008, Duvenhage helped Vanderbilt advance to the second round of the NCAA Tournament for the second year in a row with a win over No. 38 Indiana. The team also posted its first win in the SEC Tournament since 2003 when the Commodores topped Arkansas in the first round.

For as much success as the program has had on the court under Duvenhage, it has had just as much off it. During the 2009-10 academic year, Vanderbilt posted a team GPA above 3.0 and was selected as an ITA All-Academic team for the second straight year. The NCAA also lauded the Commodores for ranking among the top 10 percent in men’s tennis based on their most recent multiyear Academic Progress Rates. In 2009, Vanderbilt had three players selected as ITA Scholar Athletes. In 2008, Preston was recognized for his work in the classroom when he was named to the second team ESPN The Magazine Academic All-District IV Team. Since, Vanderbilt has been a mainstay in the ITA and SEC’s academic accolades.

The native of Kuruman, South Africa, came to America through a tennis scholarship with the University of Miami. By the time he graduated with his M.B.A. in 1983, Duvenhage boasted a 52-17 career record, competed in the NCAA singles championship his junior year and won a USTA doubles title with partner Michael Robertson in 1983.

Duvenhage served as head coach of the Miami women’s tennis program from 1982 through 1988 and led the team to a 131-44 record with a .749 winning percentage. The Hurricanes participated in post season NCAA play all seven seasons of Duvenhage’s campaign and were ranked in the national top five for four seasons. He was inducted into the University of Miami Hall of Fame in 2011 for his success during his time there.

In 1985, the Hurricanes saw one of their most successful seasons in team history when they competed in the NCAA finals and were ranked second in the nation. Duvenhage followed up the `85 season by leading Ronni Reis and Lise Gregory to the NCAA doubles championships and winning the Wilson Intercollegiate Coach of Year award in 1986.

In 1988 Duvenhage signed on with the University of Florida and began his thirteen-year reign with the Gators. From 1991 through 2000, the Florida men’s tennis team became one of only three schools to finish in the national top 16 for nine consecutive years in addition to winning two SEC titles.

In 2001, after thirteen years with the University of Florida, Duvenhage became the personal coach for Jeff Morrison and accompanied him to tournaments all over the world, including Wimbledon, the French Open, the Australian Open and the US Open.

During his time coaching athletes on the professional tour, Duvenhage took advantage of his increased amount of free time to work on his other interests, including his love of oil painting.
In 2005, Duvenhage was ready to get back into the intense lifestyle of a Division I coach and snagged the opportunity when it became available at Vanderbilt.

Duvenhage resides in Nashville with his wife, Susan. The couple enjoy hiking and traveling during the offseason.