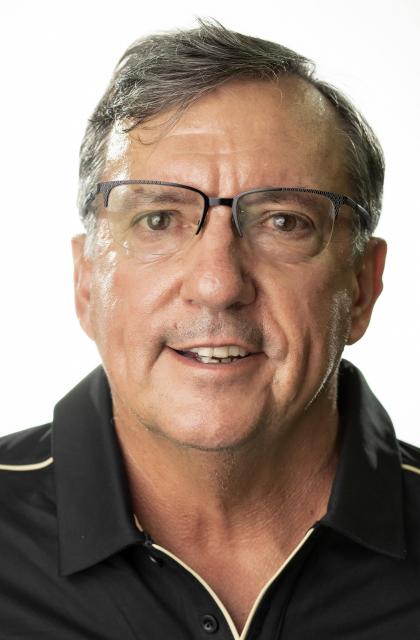 Geoff Macdonald, Vanderbilt’s longest-tenured coach, completed his 26th season as the head coach of the women’s tennis team in 2019-20.

In 2020, Coach Macdonald led the Dores to a 7-3 dual match record and concluded the shortened season 3-1 in conference matches. During their strong start to the season, the Commodores commanded a huge upset over No. 2 Ohio State at the Currey Tennis Center, 5-2. In conference play, the Dores finished with three-consecutive wins over SEC foes to cap the shortened season at No. 15 in the nation.

2019 was a strong season for the Commodores as they earned 19 victories, only dropping eight matches. The Commodores conquered eleven victories at home, only dropping two and earned 10 victories over SEC foes. In tournament play, the Dores advanced to the second round of the SEC tournament shutting out Kentucky, 4-0. The Commodores fell short to eventual champions, South Carolina to conclude their time in the tournament. In NCAA play, Macdonald coached the Commodores to a Regional sweep with victories over Miami (Ohio) and Georgia Tech followed by shutting out Texas A&M in the Super Regional for a spot in the NCAA Elite Eight. The Dores fell short to SEC opponent, Georgia 4-3 in the NCAA Championships to wrap up their stellar season. The Dores concluded the season as the No. 8 team in the nation.

In the 2017-18 season, Macdonald guided the No. 2 ranked Dores to a successful 27-4 overall season and went 12-1 in conference play. The Dores achieved becoming back to back SEC regular season champions as well as earning the title of SEC tournament champions. Macdonald led the team to yet another NCAA tournament last season where the Commodores made it to the Final Four for the fourth season in a row and competed in the championship round of the tournament. Macdonald is eager to continue this success in the upcoming 2018-19 season.

Since Macdonald joined the Vanderbilt staff in 1994, the Commodore tennis program has developed a reputation for rapid player improvement, strong commitments to coaching, and unmatched excellence on the court and in the classroom.

Before Macdonald’s arrival, the Vanderbilt women’s tennis program had never been ranked higher than No. 28 in the nation. Under his leadership, the Commodores have finished no lower than No. 19 in 17 of the past 20 years, including a school record No. 1 ranking following the ‘Dores National Championship title at the end of the 2015 season.

For the third consecutive year, the Commodores capped the 2017 season with a deep run in the NCAA Tournament, falling to Florida in the Final Four. Just one week after clinching the SEC regular-season title, the Dores hosted the SEC tournament in Nashville, and walked away with the tournament crown.

2015 was a year to remember for the Commodores as the program won its first SEC and NCAA National titles. On April 19th the Commodores upset the second-seeded UGA Bulldogs in a 4-3 thriller for the SEC Tournament Title. Exactly one month later, the `Dores were making waves in tournament play once again, defeating the defending champions UCLA Bruins 4-2 to clinch the Commodores’ third NCAA Championship and first tennis title. For his outstanding leadership on and off the court, Macdonald was voted the 2015 SEC Coach of the Year for the third time in his career and earned the 2015 Wilson/ITA National Coach of the Year Award.

Other notable wins include the `Dores three victories over the Florida Gators, an achievement which has only been done by the 2015 VU squad. At the end of the 2015 campaign three Commodores earned ITA All-American Status; Sydney Campbell (S), Ashleigh Antal (D) and Astra Sharma (D). Five student-Athletes appeared in the final ITA singles rankings, with VU sitting atop the team rankings at No. 1 in the country.

2014 was one of the most prolific seasons for the Commodores; generating an 11-0 home record and finishing out the year ranked No. 11. Under Mcdonald’s leaderhip Vandy earned the program’s 12th 20-plus win season in 2014, finishing the year with a 20-7 mark and its 13th appearance in the NCAA Sweet-16. On March 7, 2014 Macdonald earned his 500th win with the Commodores as the team sailed past SEC rival Missouri in a 7-0 victory.

During the 2012 season, Macdonald guided the tennis squad to the NCAA Tournament. The team advanced to the Second Round of the NCAA Championships before falling to one of the top teams in the country, Southern Cal.

In 2011, Macdonald lead his team back to the NCAA tournament with an appearance in the Sweet 16 round.

In 2008, Macdonald and his team started out hot as they won eight of their first 10 matches, including wins over No. 2 Georgia Tech and No. 9 Notre Dame. The 2008 squad won eight straight matches in March, including six straight SEC matches.

His 2008 squad defeated eight top-25 teams in route to its 11th straight sweet 16 appearance. During the first round of the 2008 NCAA Tournament, Vanderbilt’s 4-0 win over Indiana State gave Macdonald his 300th career win, putting himself among the nation’s best. The Commodores finished the year with a 20-6 (.769) record and were ranked 10th nationally by the ITA.

While Macdonald’s leadership continues to improve the Commodore program every season, Macdonald’s impact was felt immediately in his very first year at Vanderbilt in 1995. The team finished the year 16-8, including an 8-3 mark in the SEC and advanced to the NCAA Championships for the first time in school history.

Once Vanderbilt began its rise to the top, the achievements kept coming. In 1996, the Commodores posted a 24-7 record, finished second in the SEC, advanced to the SEC Tournament Championship match for the first time and, once again, earned a berth in the NCAA Championships, advancing to the Round of 16. The team’s 24 wins marked the the third most wins by a single team in the nation that year.

The team continued to improve with each successful season and in 2001 the ‘Dores finally found themselves in the national spotlight as they competed in the NCAA finals. The event marked the first time that any Vanderbilt sports team had played for a national championship. Despite falling to the Stanford Cardinals, Macdonald’s squad ended the season with a 26-5 record and a No. 4 national ranking, while three singles players and two doubles teams earned individual bids to the NCAA championships.

The following season, Macdonald not only matched the success of the previous year, but led the ‘Dores to a record-setting 27 wins. The team also advanced to the finals of the National Team Indoors tournament, which features sixteen of the top ranked teams in the country. Following the season, Sarah Riske and Aleke Tsoubanos were both named ITA All-Americans.

In 2003, Macdonald oversaw the final year of Sarah Riske’s career, who became the school’s only four-time All-American (two in singles, two in doubles). Riske left VU as the school’s all-time winningest doubles player, but Tsoubanos surpassed that mark a year later. The `Dores finished the 2003 season with a 21-6 record en route to advancing to the Elite Eight of the NCAA Tournament.

In 2004, the Commodores returned to the Final Four in the NCAA Tournament where they lost to undefeated Stanford, the eventual national champions. The 2004 Commodore team included All American, All-Academic and ITA Scholar Tsoubanos, who is entering her ninth year as Macdonald’s assistant. Other honors achieved by Commodores included Annie Menees’ All Academic and ITA Scholar awards, while Audra Falk and Kelly Schmandt landed All-American honors.

Macdonald has earned three Coach of the Year honors, including SEC recognition for his 2001 team, which included four ITA ranked singles players. He previously earned the title at Duke and Louisiana State University, where he began his coaching career in 1988.

During his three years with the Tigers, Macdonald took LSU from last in the SEC to the NCAA Championship as the No. 13 seed in just three years. Following the Tigers’ 1991 season, Macdonald was named the SEC Coach of the Year. Macdonald amassed a 50-24 record while at the helm of the LSU women’s tennis program.

As a player at the University of Virginia, Macdonald capped off a successful collegiate career by winning the ACC singles title in 1981. He advanced to the NCAA Championship, where he defeated David Pate in the first round.

Macdonald was named the ACC’s Most Valuable Player and also won the league’s Sportsmanship Award. He finished second to basketball great Ralph Sampson in the Athlete of the Year voting at Virginia in 1981.

Following his pro playing career, Macdonald became a private instructor until being named head coach at LSU. And now, as a Commodore, Macdonald believes the climate at Vanderbilt is right to produce national championship caliber teams. And, toward that end, he adheres to a simple coaching philosophy: Hard work and hours of individual attention for each player every week.