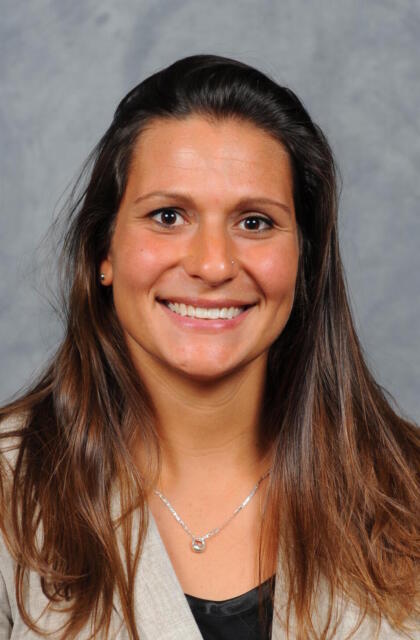 Ashley Kovacs serves as associate head coach and throws coach for the Vanderbilt women’s track and field program and is in her first season with the Commodores in 2021-22.

Kovacs came to Nashville after seven years at Ohio State where she coached throws and served as the recruiting coordinator. In Columbus, she mentored two national champions to three NCAA titles, 15 Big Ten champions, 24 top-3 conference finishes, four conference record holders, four Big Ten Athletes of the Year, and four more to Athlete of the Meet honors at the conference championships.

Prior to her time with the Buckeyes, Kovacs spent two seasons at Western Kentucky where she was the 2014 U.S. Track & Field and Cross Country Coaches Association (USTFCCCA) Southeast Region Women’s Assistant Coach of the Year after guiding the women’s throwers to 10 of the Top 25 throwing marks in program history, including school records in the indoor and outdoor shot put, weight throw and discus. The Hilltoppers won the indoor and outdoor conference championships in 2014 as Kovacs mentored Jessica Ramsey, who became Western Kentucky’s first female student-athlete to qualify for three different events at the NCAA outdoor championships. Ramsey also was an All-American and seven-time conference champion.

As a graduate assistant at Murray State in 2011-12, Kovacs tutored the throwers and mentored Tonia Pratt to Ohio Valley Conference championships in the weight and hammer throws. Pratt then claimed indoor and outdoor OVC Freshman of the Year awards.

A four-time All-American at Kentucky from 2006-2010, Kovacs was an 11-time All-SEC selection, an SEC Most Valuable Player and Commissioner’s Cup winner, and a runner-up in the shot put at the 2010 NCAA Indoor Championships. Kovacs participated in the U.S Olympic trials in 2008 and 2012 and graduated with school records in the shot put and discus.

Kovacs earned her bachelor’s degree in telecommunications from the University of Kentucky in 2010, added a master’s in human development and leadership from Murray State University in 2012 and a second master’s degree in sports coaching from Ohio State in 2017.

A native Ohioan, Kovacs is a graduate of North Canton Hoover High School (2001-2005), where she was a three-time state champion and former state record holder in the shot put.

Kovacs (nee Muffet) is married to Joe Kovacs, who is a two-time world champion and won the silver medal as a member of Team USA in the shot put at the 2020 Olympic Games in Tokyo.