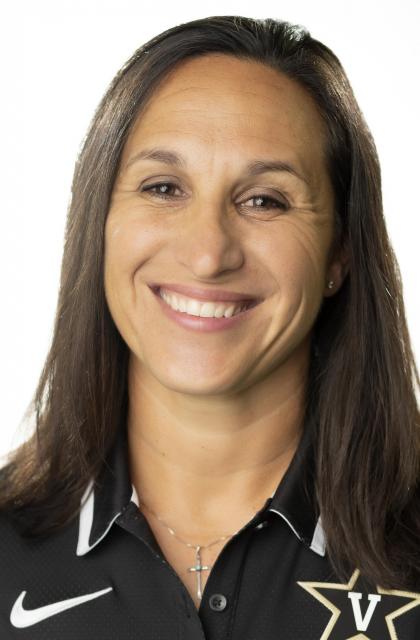 Aleke Tsoubanos is in her second season at the helm of the women’s tennis program in 2021-22. She has been with the Commodores for nearly 20 years after competing as a student-athlete from 2000-04 and serving as an assistant and associate head coach under Geoff Macdonald for 13 seasons from 2008-20 before taking over.

A three-time All-American as a student-athlete, Tsoubanos plays an essential role in bringing in some of the nation’s top recruiting classes to Music City and has been essential to the program’s elite level of success, including the squad’s back-to-back SEC regular-season and tournament crowns (2017, 2018) and 2015 national championship title.

In her first season as head coach, Tsoubanos guided the Commodores to a perfect 8-0 start with a big road victory over No. 9 Georgia Tech. While also beating four ranked SEC teams along the way, she took the Commodores to a 26th-straight NCAA Tournament and nearly ousted No. 15 seed Ohio State in the second round on the way to finishing No. 29 in the nation as a team. At season’s end, she tutored Christina Rosca to an Elite Eight finish at the NCAA Singles Tournament.

From 2015 to 2018, Tsoubanos helped guide Vanderbilt to three SEC Tournament titles, back-to-back regular-season titles in 2017 and 2018 and trips to the Final Four in all four seasons. The run was bookended by trips to the national championship game in 2015 and 2018, winning the title in 2015 while falling 4-3 in 2018. Across the four years, Vanderbilt went 99-22 while finishing no lower than second in the conference and fifth in the nation.

Known as one of the most respected college coaching duos in the country with Macdonald, the two earned several awards in 2015 for their passionate leadership on and off the court. One of the most respected coaches for years, Tsoubanos is a three-time Ohio Valley Assistant Coach of the Year honoree and also earned the ITA National Assistant Coach of the Year honor along the way.

Since Tsoubanos joined the program as a coach ahead of 2008, the Commodores have finished top 10 in the country six times, top 20 on 10 times and have never finished outside the top 30 in 14 seasons.

A native of St. Louis, Tsoubanos was a standout student-athlete for the Commodores. During her career at Vandy, she was a three-time ITA All-American (2002-04), first-team All-NCAA selection, first-team All-SEC selection in both singles and doubles and was the first player to win the ITA All-American Riviera doubles championship two consecutive years with two different partners. Tsoubanos also excelled off the court, where she earned All-SEC Academic Team accolades.

Inducted into the Vanderbilt Hall of Fame in 2015, Tsoubanos still holds four school records. She partnered with Kelly Schmandt in 2004 to win 15 consecutive doubles matches, and she owns the highest doubles winning percentage in a career by winning 82 percent of her doubles matches from 2000-04. She also has the most career doubles victories with 119 and registered 32 doubles victories in a season with both Sarah Riske (2003) and Kelly Schmandt (2004).

The Commodores enjoyed some of their most successful years early in Macdonald’s tenure while Tsoubanos was a member of the team. Vanderbilt made the national championship match in her freshman season and made the Elite Eight (2003) and Final Four (2004) in her final two years in black and gold.

In 2005-06, Tsoubanos played World Team Tennis for her hometown team, the St. Louis Aces. While with the Aces, she scored doubles wins over players like Anna Kournikova and Meghann Shaughnessy.

Tsoubanos resides in Nashville with her husband, Dr. Jason Valentine (associate professor of mechanical engineering at Vanderbilt) and their three children; Andrew (7), Evie (5) and Lia (1).