Charley and Schwab named Vanderbilt Athletes of the Year 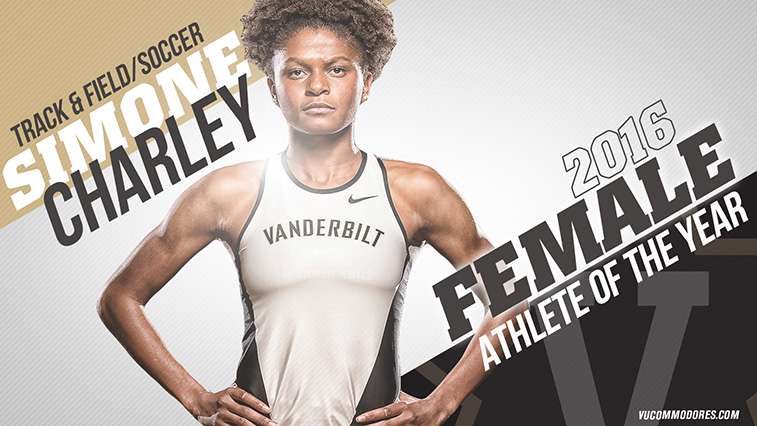 Juniors Simone Charley and Matthias Schwab have been named Vanderbilt’s 2015-16 Athletes of the Year. Both are nominees for the SEC Athlete of the Year honor.

Charley, a two-sport star in track and field and soccer, earned first team All-America honors in the triple jump at the NCAA Indoor and Outdoor Championships. She also received second team All-SEC plaudits in soccer.

Schwab, a member of the men’s golf team, was named first team All-American and first team All-SEC after leading Vanderbilt with a stroke average of 70.53. Schwab tied for third at the NCAA Championships, while helping the team finish in the tie for fifth.

For Charley, it is the third consecutive years she has earned Female Athlete of the Year honors.

“Simone Charley has every tool you need to be successful — and she uses them all to the fullest,” said associate track coach Clark Humphreys. “Her work ethic is off the charts. Her competitive drive is so strong. And, obviously, she is incredibly talented. She is an elite-level athlete, a great student and a wonderful person.”

Charley finished second at the NCAA Championships in both indoor and outdoor seasons, and broke her own school record in triple jump on multiple occasions, including stetting a lifetime-best mark of 45-02.25 at the national outdoor meet this spring. She then capped her season by earning invites to two prestigious events — the US Olympic Trials and the North American, Central American and Caribbean Athletics Association U-23 Championships.

On the soccer field, she led the team in goals (7), assists (4) and points (18). She was named to the All-South Region First Team and was a Second Team All-SEC honoree.Charley also excels in the classroom, earning SEC Academic Honor Roll honors.

“Simone has what I call the championship mentality,” said head coach track and cross country coach Steve Keith. “It’s the ability to focus and block things out — and to be able to relax at the same time. Those are characteristics that Simone has. It’s what has gotten her this far.” 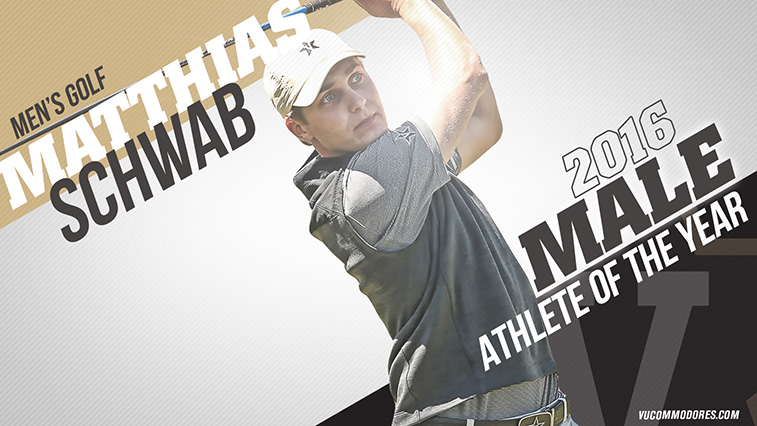 Schwab, a junior from Rohrmoos, Austria, was named the program’s third first-team All-American and the second in two seasons by the Golf Coaches Association of America this year. Schwab joins Hunter Stewart, who was honored in 2015, and Brandt Snedeker, who was selected to the 2003 First Team.

Schwab played in 34 stroke-play rounds and posted a stroke average of 70.53 in 2015-16, a team-best and the fourth-lowest single-season total in program history. Along with his GCAA first-team All-America honor, he was also named to the All-SEC First Team for the second consecutive season. Schwab posted six top 10 finishes, shared medalist honors at the Carmel Cup at the Pebble Beach Golf Links, and was one of only four players to shoot under par for the four rounds of stroke play (71-68-67-73=279) at the national championship in Eugene, Oregon, earlier this spring. He also finished third at the Mason Rudolph Championship, tied for seventh at the Schenkel Invitational, tied for eighth at the Querencio Cabo Collegiate, and eighth at the DICK’s Sporting Goods Challenge. Schwab carded 12 rounds in the 60’s this season, including a season-low 67 in the first round of the Mason Rudolph Championship and his 54-hole low score came at the Nike Collegiate Invitational, when he shot a six-under par, 209 (69-69-71).

In June, Schwab clinched the Palmer Cup, a Ryder-Cup type competition that pits the best collegiate amateurs from Europe and the United States, for Team Europe and was was selected by both teams to receive the Arnold Palmer Cup exemption into the 2017 Arnold Palmer Invitational presented by MasterCard. Players selected the individual from both teams that they think best represents the “Arnold Palmer Legacy,” that is, the values that Arnold Palmer exhibited through his life in golf.