SCOTTSDALE, Ariz. — Vanderbilt’s first day of the 2021 NCAA Championships got off to a prickly start on the Raptor Course of the Grayhawk Golf Club.

The Commodores finished 13-over-par as a team and sit 23rd going into Saturday’s second round. The top 15 teams at the end of Sunday’s final round advance to a fourth round Monday.

Vandy, just five strokes back of the top 15, is scheduled to tee off at 9:27 a.m. CT from hole No. 10 along with Arizona State and Georgia.

“We didn’t have our best stuff – it’s the first round of the national championship – and I just think we didn’t putt with a ton of consistency today, for sure. We’ll need to do that better (Saturday),” Vanderbilt head coach Scott Limbaugh said. “We got to stay patient with our plan, trust our plan and guys got to step up. That’s what we had all year. We got to play better as a group. 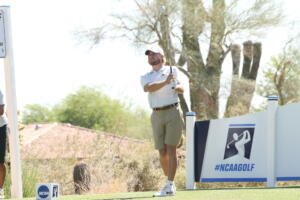 Michael Shears was the standout Commodore on a day when temperatures reached 100 digits. The junior was the first to tee off from No. 1 just before 1 p.m. local time.

The Franklin native, tied for 28th overall, birdied three of his last six holes on the front side and made the turn at 1-under-par. He finished the day at even-par.

“Overall it was good,” Shears said. “I hit the ball well and kept it out of the desert. It was a good start.”

Matthew Riedel found two birdies on the back nine and carded a 4-over-par 74. He’s tied for 87th going into Saturday.

Cole Sherwood bogeyed two of his final three holes to also end his day 4-over-par. Reid Davenport (tied for 105th) shot a 5-over-par while William Moll (tied for 128th) ended his round with a double bogey on 18 and is 7-over-par.

“Michael lifted the team up today,” Limbaugh said. “That’s why he’s playing. He’s playing really good golf right now and he’s got a lot of confidence. Really proud of the job he did today.

“I really thought he battled.”

Texas Tech inched forward as the team leader after the first day with a 4-under-par 276. Sam Houston State came in at 2-under-par.

Cole Bradley, an individual participant from Purdue, leads the field at 4-under-par.

“You always you know the morning tee times are the preferred tee times,” Limbaugh said. “We just got to get everybody moving forward to see if we can get a little bit of momentum and may need to adjust some things a little bit.

“The main thing is just us being excited and not thinking we got to do more. And then some of our good players that have played good for us all year need to step up.”