Casey at the Stadium

NASHVILLE, Tenn. — Looking back it sort of makes sense, no matter how unbelievable it may seem.

Casey Stangel met Clark Lea a few years ago, when the now Vanderbilt head football coach came to Nashville to observe Vanderbilt baseball. Stangel escorted Lea around Hawkins Field as the Vandy alum asked questions about the national championship program, watched training, explored the facility and sat in on one of Tim Corbin’s legendary classroom sessions

At the end of the visit, Lea gave Stangel his business card.

“I had his card and put it in my desk drawer and it was there and I would shuffle through things and see it every now and then think, ‘Gosh, I should check in with Clark Lea,’ ” Stangel said. “Somehow it ended up in my house. One time it was in my nightstand. I was cleaning out my car once and it was in there. It got to a point where I was like, ‘There’s a reason I can’t lose this guy’s card.’

“My husband and I recently moved into a new house and I was unpacking and there was a Clark Lea business card. By then it became laughable. When he got this job I was like, ‘Oh, now I get it.’ This was maybe meant to be.”

Stangel, the Vanderbilt football director of operations, admits she never imagined leaving Vanderbilt baseball. As Corbin’s internal operations coordinator she was a vital part of an organization that reached the top of the college baseball world in 2019 with a national title. 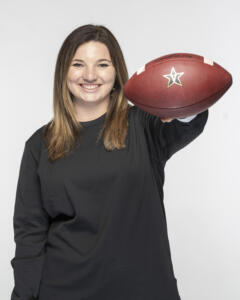 But Lea, still Notre Dame’s defensive coordinator reconnected with Stangel immediately after he accepted the position of Vanderbilt football coach and Stangel had made the move from the diamond to the gridiron before Notre Dame had even played Alabama in the College Football Playoff.

“The day I met Clark Lea I knew I wanted to work for him someday,” Stangel said. “I was not really certain how that could ever happen, but I knew that’s what I wanted. There is so much depth to him. He asks the questions others do not think to ask. He has a contagious personality. He isn’t afraid to be unconventional. I believe that will be a reason we will have long-term success here. I am wholeheartedly committed to the vision he has for this program and am so energized to be a part of the execution of that vision.”

It may be easier to ask Stangel what she doesn’t do for Vanderbilt football than what she does do. But part of her being a jack-of-all-trades in March of 2021 has to do with Lea’s diligence in assembling his staff over the past two months.

The self-titled question-answerer works in the realm of day-to-day operations – examining what Vanderbilt football is doing, why it is doing it and how it can do it better as well as – and dabbles in everything from academic scheduling to organization. Stangel said a big adjustment for her has been going from one of the nation’s most well-oiled machines to building a machine.

There are similarities between the leaders of the machines, Lea and Corbin.

“From a base level, they both care deeply about the small things,” Stangel said. “They care about the non-sports things more than the sports things. They’d rather have things right within their program than win every game. They know they’re not going to win everything until they have things right internally. They’re developing humans and good people who will go out into the community and do great things. They both are high-motor guys. They are going to outwork everyone around them. And they’re constant learners. They’re teachers. There are so many parallels between them.

“We’re all excited about what this could be one day, but what excites me is seeing those tiny, daily glimpses of progress and knowing that we’re moving forward,” she said. “Seeing the small changes over the course of a week or two weeks is exciting to me.

“Being in a place where the only expectation is the one we assign unto ourselves is motivational. We know the standard we’re setting internally and have a really high belief in that. That’s exciting to be a part of right now.”