Vanderbilt wide receiver prepared to step into No. 1 role in Commodores' offense

NASHVILLE, Tenn. — More often than not, the word that surfaces when coaches and teammates watch Cam Johnson play football is tough.

He gets that from his mother.

“She has taught me throughout life just to push through your issues, talk about them when you need to and if something is coming at you that you feel like you can’t handle, just always know that God’s got you and that you’re going to be able push through it,” Johnson said. “Whenever I have a tough time or there’s something that’s going on in front of me that seems like a daunting task, I’m going to take it full-force ahead just because of some of the stuff that she’s taught me and because of some of the things I went through throughout my life.”

A high school star a nearby Brentwood Academy where he won state football championships with other future Division I student-athletes, claimed a state basketball title with former Commodore and current NBA star Darius Garland and also found time to run track, Johnson is now poised to have a breakout season in 2020. The 6-foot, 198-pound wide receiver missed the majority of the 2018 campaign with an ankle injury and complimented standout wide receiver Kalija Lipscomb in 2019.

Johnson used the offseason to get himself to be ready make a major impact for the Commodores this fall.

“I’ve been excited since we got back on campus and been able to say that we’re going to actually have the season,” he said. “I can’t wait to get out there and show some of the work that I got to put in over the offseason.

“As much as we missed spring ball, to be able to go in and put some of the minute details into my game and work on those things was big. I’m excited to show what all I have improved on over this offseason.” 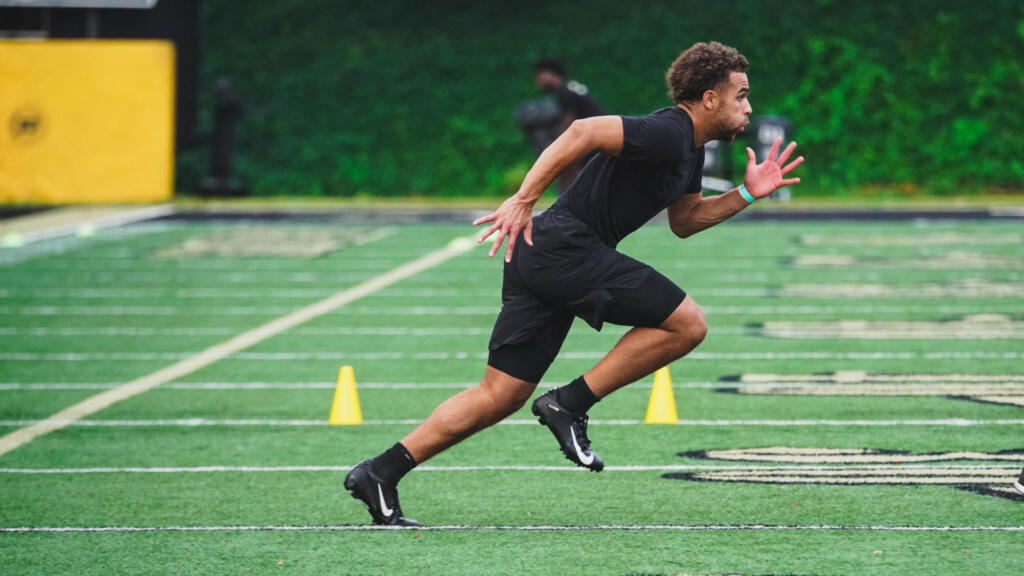 Johnson says he really only has two vivid memories of his late father – one being when they spent time together at his grandmother’s house and another when his father took him swimming at a hotel pool.

“I didn’t have swim trunks and he made me swim in my boxers and I thought that was the weirdest thing ever,” Johnson laughed.

“I had to kind of be mom and dad, so I was a little hard on him a lot of times. I just wanted to make sure he was tough and could just make it through things,” said Ashley Fox, Cam Johnson’s mother. “I’ve been a single mom pretty much my entire life and so I know how it is.

“You just kind of have to take things as they are and keep moving forward and make the best of everything. That’s just kind of what I tried to instill in him.”

As Johnson began to grow into his athletic form he began to emulate some of his father’s athletic success. At Madisonville-North Hopkins High School, Donald Johnson was a four-year letterman in both basketball and football and a team captain – he averaged a modest 8.1 points per game as a senior during the 1996-97 basketball season. 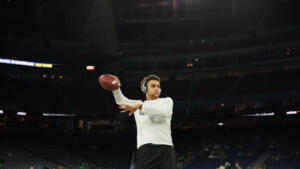 Johnson recalls how the two would go to a restaurant to eat and how his grandfather would purposely order something on the menu he knew his grandson would eventually rather eat instead of his own order.

In 2011, Johnson and his mother began to have serious discussions about moving to Nashville so Johnson could have better academic and athletic opportunities.

“I was nervous, but I had talked to (my grandfather) about it before and he was just telling me, ‘This is going to be good for you, you need to go,’ ” Johnson said. “He really wanted me to do it. I was talking to him one day and remember telling him, ‘I’m going to miss you so much.’

“He said he was going to come to every game.”

“My dad stepped up,” Ashley Fox said, holding back the still-strong emotions. “He just helped out a lot, taught him a lot of sports and how to play and all sorts of other things – they were really close.”

After making four catches for 45 yards in four games during an injury-shortened 2018 season, Johnson came back strong in 2019 by totaling 316 yards on 30 receptions. His three touchdown grabs matched Lipscomb for a team-high.

The Commodores played 12 games last season – and so did Johnson.

“A savvy, cool, calm, collective competitor that is like a fireman – you can depend on him to show up regardless of the situation,” Vanderbilt special teams coordinator and tight ends coach Devin Fitzsimmons said. “A collector of information that knows exactly how and when to apply it. He wants himself to be great along with his teammates and coaches.

“A rare young man that can just figure it out on his own to get the job done. Cam is a guy that we are lucky to have at Vanderbilt – he is relentless, tough and intelligent.”

Johnson begins his third year at Vanderbilt with a veteran mentality despite being classified as a redshirt sophomore. Working under a new offensive coordinator in Todd Fitch and with a new, yet-to-be-determined quarterback to catch balls from, the table is set for the potential to put up big numbers.

And after more time to properly immerse himself in the type of weight training and conditioning necessary to compete in the SEC, Johnson feels more confident than ever.

“When I was in high school I played three sports that all did training in totally different ways,” he said. “Being able to put on some muscle, getting stronger in the weight room was definitely good for me.

“But also to be able to sort of sit back and watch from a bird’s eye view (in 2018) was good. I’ve learned so much football over the past year and a half that I didn’t know before. I always talk about with my friends, ‘If I knew some of this stuff when I was in high school I would have had so many yards.’ So it’s been good just to learn the game of football and see things from a different perspective.”

In 16 career games, Johnson has recorded at least one reception in every contest except for his college debut Sept. 1, 2018. That streak is likely to continue Sept. 26 when the Commodores visit No. 13 Texas A&M to begin the season.

The best is yet to come.

Focusing on the Future

Johnson admits he likes to argue just for the fun of it.

His favorite past time is to pull up any sports talk program where debate is the driving force of the script – and he’ll imagine himself filling that role one day long after his playing career has come and gone. 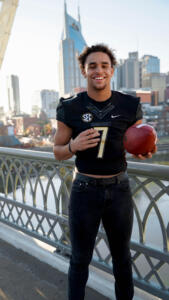 But for now the Human and Organizational Development major with minors in Sociology and Business has some ball to play. And despite the high expectations for his production on the field, Johnson doesn’t feel any pressure this season to perform at a higher level than he ever has before

He credits the talent level of his teammates for that.

It’s been 16 years since Johnson lost his father and eight since his said goodbye to his grandfather. Those two moments had a profound impact on who the Kentucky native has become today – a Vanderbilt student-athlete who has put it altogether.

“I really have no words. He just amazes me,” Fox said. “Not only is he smart and athletic, but he’s a super-sweet person. I’ve just never met anyone that does it like him. He has a really good attitude and always stays positive about everything.

“I’m just super proud of him.”