Birdies, a Birthday and a Big Lead

The Commodores came off the course Monday with a two-day total of 536 and are now 32-under after 36 holes. They lead Texas A&M by 10 strokes going into Tuesday’s final round at the Vanderbilt Legends Club in Franklin, Tennessee.

Vanderbilt was 19-under for the day Monday and its team score of 265 set a new program record for low round by a Vandy team, besting the mark of 267 set during the 2007 NCAA West Regional in Tempe, Arizona.

“Really pleased with how our guys competed and played for the entire round (Monday),” Vanderbilt head coach Scott Limbaugh. “It was a total team effort. We wanted to be a little better today than we were (Sunday) and we were able to do that which was good.”

Matthew Riedel continued his stellar play by shooting a 7-under 64 – and doing so on his 20th birthday. The sophomore from Houston, Texas, scored an eagle on 18 and finished with five birdies.

He is tied for the individual lead with Julian Perico of Arkansas, both of whom are 12-under with 18 holes to play.

John Augenstein (10-under) is tied for fourth going into Tuesday after a second-round 65 on the par 71 North Course. The fifth-year senior had seven birdies Monday including three straight on holes 14, 15 and 16.

“Matthew was very good for the entire round and it’s exciting for our team to see the steps he is taking,” Limbaugh said. “He played great today and finished the round really strong. John was steady all day long which allowed him to finish well playing his last five holes in 4-under.” 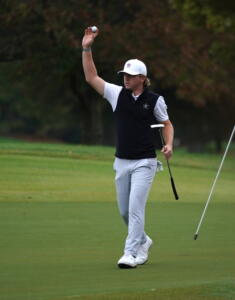 William Moll and Reid Davenport both carded 68s on Monday and are each tied for 16th overall at 5-under. Harrison Ott’s 69 put him 3-under and tied for 25th.

“I thought William did a great job competing without his best ball striking which to me says he is maturing as a player,” Limbaugh said. “Reid and Harry both were good today and doing a lot of good things out there.”

Vandy will go into Tuesday’s action not only leading Texas A&M by 10 shots, but Georgia by 11 and Florida by 14.

Live scoring for the final round can be found HERE and updates will be posted on Instagram and Twitter as well.

“(Tuesday) is an important day for us because it’s our next chance to grow,” Limbaugh said. “We have to continue to have a sense of urgency about what we are trying to do and the team we are trying to become.

“The things we have to continue to do are to play the next shot, have great competitive character and enjoy playing the game.”