NASHVILLE, Tenn. — Vanderbilt has competed in the NCAA Bowling Championship more often than almost any other program in the nation, but for junior Angelica Anthony, little felt familiar about this year’s journey to the sport’s biggest collegiate competition in North Kansas City, Missouri.

It began the moment Anthony’s parents delivered her to campus this past summer. It wasn’t just pandemic rules that prevented her father from entering her residence that made the experience strange. It wasn’t just the pervading sense of quiet, the normal hustle and bustle of move-ins muted with so many students still remote. It was mostly that after transferring from Wichita State, moving in marked her first visit to Vanderbilt.

So it was hardly surprising when her parents, after leaving for their return drive to Texas, heard some trepidation in her voice and messages in the days that followed. She didn’t know people. She didn’t know the city. And a pandemic made it difficult to go about changing those truths.

William Anthony, who served nearly 30 years in the Army and taught Angelica to bowl on the lanes of a base near Illesheim, Germany, advised his daughter to trust her experience.

“It’s just like anywhere in the Army,” he told his daughter. “How many times have you and your mother and I moved, and we’ve gone to a new base where we don’t know anybody? There’s going to be that first week where you’re the new guy on the block. And you’re going to have to deal with it until you find your zone and your battle rhythm.”

She followed the advice. Without knowing it, the entire team followed that plan.

Anthony settled in. She was instrumental when Vanderbilt triumphed in the Southland Bowling League Championship — she earned all-tournament honors and helped the Commodores earn an automatic NCAA bid. Hers is a good story on its own. And yet Vanderbilt is bowling for its third national title beginning Wednesday against Mount St. Mary’s because her story isn’t one of a kind with this group. 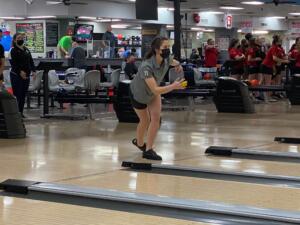 There are nine women on the roster. Whether as transfers, freshmen or sophomores who saw last season cut short by the pandemic, six will compete in an NCAA championship for the first time this week. Certainly no one on the roster ever navigated a season shaped by a pandemic. It is an unlikely formula for maintaining a dynasty that boasts 14 consecutive appearances in what is now a 16-team double-elimination championship event. It also appears to be working. Perhaps because like Anthony, all they know is that Vanderbilt is supposed to set the standard.

“One of the coolest things about being here is there’s so much pride in this program,” Anthony said. “You can tell there is a legacy we’re trying to follow but also build on. It’s incredible.

“Especially for those of us that just came in, you can’t really know what to expect from a program until you’re actually a part of it. To see how much pride there is here — even in the school itself — is just so cool. Vanderbilt has some high expectations, and that translates to the team. I appreciate it because it’s more than yourself. You’re more than a person on the team, you’re a student who goes to Vanderbilt University.”

Anthony’s path to Vanderbilt traces the evolution of a sport at the college level. Her father was a competitive bowler while in the military, even participating on U.S. national teams on occasion. Among his peers were the men who went on to coach at Wichita State, where both the men’s and women’s bowling teams — as club sports — are traditionally juggernauts. The university notes that more than 20 of its alums currently bowl professionally.

As a highly decorated youth bowler and family ties to the established bowling community, she was the kind of student-athlete that made Wichita State a dynasty in its own right well before the NCAA added women’s bowling in 2004. (Wichita State is one of many schools that still doesn’t sponsor bowling as an NCAA varsity sport, its program continuing at club level).

But the bowling world was shifting even as she headed to Wichita, Kansas. More women are going the NCAA route, following in the footsteps of bowlers like Vanderbilt associate head coach and former two-time NCAA Player of the Year Josie Earnest Barnes. An aspiring nurse, Anthony saw an environment where she could challenge her game and set up a path beyond bowling. Transferring meant sitting out a full year at Wichita State to meet all of the academic requirements for the move. It was worth it to her.

“Especially for women, everyone is trying to go NCAA now because there is just so much more offered,” Anthony said. “But growing up, I never watched the NCAA championship. I didn’t even know how different it was from club teams. It has really taken off in the last few years. Vanderbilt is still one of those new entities, and what is really cool about it is everyone is trying to go here now. But when I was younger, everyone was trying to go to the Nebraskas and the Wichita States because of their history and how many professional bowlers they’ve produced over time.” 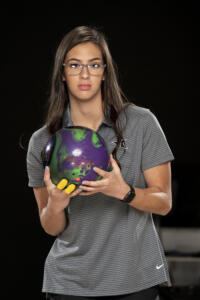 The complication, of course, was a pandemic that reshaped much of everyday life. Anthony saw campus for the first time when she moved in because her original visit was scheduled for last March—right around the time the world shut down and the bowling season ended prematurely.

That was just the first of the obstacles.

With necessary limitations on face-to-face interaction, a team full of newcomers didn’t have the usual opportunities to get to know each other. In bowling alleys usually filled with dozens of teams, where the energy buzzes and competitors all but pile atop each other, tournaments took on an oddly antiseptic feel. The adrenaline rush that might have help bond them fizzled.

Finding that battle rhythm, as Anthony’s dad might say, took time. Thankfully, not too much time.

“We need that energy,” Anthony said. “We need the contact and the connection that we didn’t have at the beginning of the year. By our last tournament, the conference tournament, you could feel that we were a team in that moment. It’s crazy because it’s just the simple sense of touch—you’re on top of each other, you just feel united as a team. We need to have energy to get started and taking that away was hard for us.”

Anthony didn’t win the Southland tournament on her own. No one on this team needs to go it alone, not rising star Mabel Cummins, not the rare veteran Samantha Gainor. But just as her story explains a lot about a strange year for all of them, Anthony’s success in that tournament spoke volumes about the team as a whole. 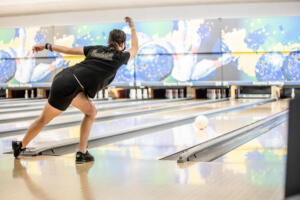 “That might be one of the most special moments I’ve had in some time,” Barnes said of Anthony’s performance. “We’ve talked a lot this year about the mental approach to the game. She has all the tools—you do not have to be in the bowling world to realize she’s good. She’s got spunk. She does some things you can’t teach.”

She adapted to her surroundings, just as her father advised her to do all those months ago when she arrived in Nashville. The entire team adapted—to bowling against better competition, in many cases, and to circumstances beyond their control in every case. They are competing for a national championship because the sort of student-athletes who bowl for Vanderbilt are good at what they do. And motivated to be better. No matter what stands in their way.

A lack of championship experience? A difficult draw opposite second-seeded Nebraska? That’s just the next challenge in a year full of them.

“I’m so extremely nervous, but I think it just stems from the excitement and the possibility of what we could do,” Anthony said. “It’s really cool to be able to compete for a national championship. Not everybody can say that. It’s exhilarating. I know there’s going to be anxiety, but I also know we’re more than prepared. A lot of the anxiety stems from us caring so much about continuing the legacy that previous teams left.”

This team isn’t like any of those previous teams. Except in one very important respect.

They were all Vanderbilt teams. And when it comes to bowling, that means quite a bit.

— Graham Hays is the Content Writing Specialist for Vanderbilt University.