And just like that, @VandyBowling secures the 2021 Southland Bowling League Championship!

HARAHAN, La. — Vanderbilt was pushed to the near-limit by an explosive Louisiana Tech team before rallying to win the Southland Bowling League Championship, 4-2 in the decisive best-of-seven match Sunday.

“It was incredible to watch,” Vanderbil associate head coach Josie Barnes said afterwards. “We lost a couple of tournaments this year and some we bowled in didn’t have a traditional format so we didn’t have a lot of Baker experience under our belt. This experience is huge for us.

“We told them after we lost the Baker segment (Saturday) to Sam Houston that we at least got more experience. Same thing today. Would we have liked to win in two? Sure. But we were going with three freshmen, a transfer and Mabel (Cummins) who didn’t get to bowl last year’s tournament as a freshman.”

The shot that won it all. 🏆#AnchorDown pic.twitter.com/WzzEGaAh8j

Barnes noted the day had an unusual start for the Commodores who arrived at the Colonial Lanes to await the winner of the Sam Houston-Louisiana Tech semifinal. That was a lengthy, back-and-forth game in which Vandy warmed up seven times before Tech won out.

The Commodores entered the day undefeated and could have captured their third league title with a mega-match victory over Tech. After winning the traditional game point, Vandy saw the Bulldogs come back to win the Baker portion and force another best-of-seven Baker games with the winner taking home the coveted trophy.

Vanderbilt struck in the front five frames while heading to an opening 230-187 win and seemed on the cusp of going up 2-0. Cummins, the tournament’s Most Valuable Player, needed just seven pins to clinch the game after doubling in the 10th. 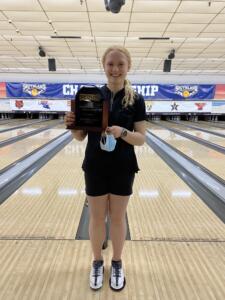 “The team’s reaction (to the Greek Church leave) was different from Mabel’s,” Barnes noted. “I am near the team and their reaction was like, ‘Team, that sucks, but we’ve got it.’

The gritty Commodores came back with wins in Games 4 and 5 to seize a commanding 3-1 lead before a pair of late splits in Game 5 left the scoreboard at 3-2.

Vandy had settled on a rotation of Angelica Anthony, Angelique Dalesandro, Amanda Naujokas, Jennifer Loredo and Cummins but swapped Caroline Thesier for Dalesandro in Game 6. As Tech seemed to implode, Vandy stayed clean, including a spectacular, low-percentage spare conversion (3-6-7) by Loredo in the ninth producing an anti-climactic win to an otherwise tight and tense day.

Barnes was impressed by Loredo’s play in the tournament.

“You could easily make a case for Jenn making the all-tournament team,” she said. “Her first game was a little bumpy against Tulane but after that she was fantastic.”

The championship marked the third time in six years that Vanderbilt has prevailed in what many consider the nation’s most-talented conference – Vandy previously won in 2015 and 2017. There was no tournament last year due to the COVID-19 pandemic.

Anthony, a Wichita State transfer in her first season at Vanderbilt, was outstanding in her leadoff role and was named to the All-Tournament team along with Ashley Channell and Danielle Jedlicki of Tech and Denise Blankenzee of Sam Houston. 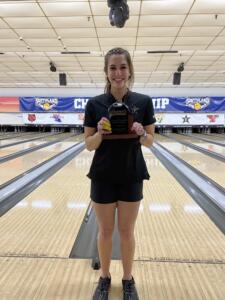 “That might be one of the most special moments I’ve had in some time,” Barnes said of Anthony’s performance. “We’ve talked a lot this year about the mental approach to the game. She has all the tools – you do not have to be in the bowling world to realize she’s good. She’s got spunk. She does some things you can’t teach.”

Vanderbilt had begun its day with a solid 1,038-992 win over the second-seeded Bulldogs, the fourth straight time Vandy has won the traditional point on the Colonial Lanes. Anthony led the way with a 237 and received strong help from Lorerdo’s 226 and Cummins’ 221.

The Dores actually played the 5-Game Baker set well, losing the total pin count 1,072-1,037, while using a rotation featuring three freshmen – Loredo, Thesier and Naujokas and the transfer Anthony. Vandy would lose the mega-match best of seven 4.5-1.5 as Tech posted several monster games of 259, 233 and 224.

That loss made the decisive best-of-seven necessary in the double-elimination format.

The shot that won it all. 🏆#AnchorDown pic.twitter.com/WzzEGaAh8j