WEST POINT, Miss. — The Commodores finished off the regular season in style Tuesday and crowned another individual champion in the process.

Vanderbilt raced away from the field at the Mossy Oak Collegiate to win by 12 strokes and Gordon Sargent jetted in front of Mississippi State’s Hunter Logan to shoot a three-day total of 204 winning low medalist honors at 12-under-par.

“Really pumped for our guys and how they locked in and took pride in finishing this part of our season the right way,” Vanderbilt head coach Scott Limbaugh said. “Winning isn’t easy and they played with a lot of courage this week. Success can kind of make you lose focus if you don’t own your actions and your thoughts, so you have to hold yourself to the highest levels possible.” 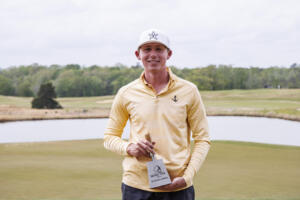 Sargent was 1-over-par after nine holes Tuesday, then carded three birdies in four holes to leap in front of Logan. The freshman played even-par down the stretch to close out the win.

Vanderbilt, as a team, held just a two-stroke lead after the completion of the second round Tuesday morning. But then second-place Mississippi State faded during its final 18 while Auburn surged ahead with the best round of any team all day at 10-under-par.

The Tigers still couldn’t do enough to catch the Dores and finished 12 strokes back of the champs. Vandy went 9-under-par for its final 18 and was 25-under-par overall.

Reid Davenport continued to play solid, consistent golf for Vandy and finished third at 8-under-par for the tournament. Reigning SEC Player of the Week Cole Sherwood saved his best round for last by carding a 69 on Tuesday – he finished tied for 12th at 2-under-par.

“Gordon played awesome this week and I’m so proud of him. He did a good job staying patient and believing in himself,” Limbaugh said. “Reid had another outstanding week and finished each round so strong which says a lot about his character and leadership. You learn a lot about your players when things aren’t easy and I love what we learned about Cole this week. Man he battled and finally went on a good run today.”

Vanderbilt now turns its attention to the SEC Championships on Saint Simons Island, Georgia, next week. The Commodores won the 2021 event by beating Tennessee, Alabama and Arkansas, respectively, in the match play portion of the competition.

“We’ve got a short turnaround before we head to the SEC Championship. We need to keep putting the work in and focusing on the little things we need to do to improve because there are things we can all do better,” Limbaugh said. “Championship season is about being mentally tough and embracing the moment when your moment arrives. That’s why preparation is so important and we have to stay hungry and humble.”