Abdur-Rahman emerging as one of Vanderbilt's top receivers

NASHVILLE, Tenn. — If Amir Abdur-Rahman’s athletic story were to be told, the movie rights would not be hard to sell.

Picture the Vanderbilt wide receiver as a sophomore in high school. Getting a workout with his teammates at track practice at Mays High School in Atlanta, a stray football from the adjacent football practice rolled and bounced onto the track in front of Abdur-Rahman.

When he picked that ball up and went to throw it back to the football field, his classmates urged and begged him to come join them. He ran a few routes, laughed, made some receptions and didn’t think too seriously about it.

“The coach was like, ‘I’ll see you in the morning at the 5 a.m. practice,’ ” Abdur-Rahman said. “After that I just kept playing.” 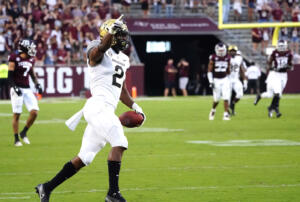 Thus began Abdur-Rahman’s football career. It’s a career that has been as unexpected as it is promising.

The 6-foot-4, 215-pound junior is just scratching the surface of his gridiron prowess. He still has more than two seasons of eligibility remaining after his second campaign was cut short due to a season-ending knee injury against Georgia in Week 1.

His return to the field in full health has been a blessing, he said. Abdur-Rahman had never experienced that serious of an injury before and, in fact, had never even been to a hospital before his leg had to be surgically repaired in the fall of 2019.

He termed the rehabilitation process as a “no-days-off” mindset in order to get back into playing shape. The experience also allowed him to view things from a different perspective.

“It definitely helped me open up my mind to the game and appreciate the guys that came before me,” Abdur-Rahman said. “It really showed me how they worked hard to get here and how it can be taken away at any moment. 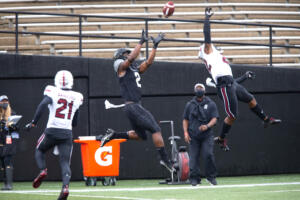 Abdur-Rahman is Vanderbilt’s second-leading receiver with 122 yards and has one of the three touchdown grabs hauled in by Commodores in 2020. His five-catch, 72-yard showing Sept. 26 at Texas A&M set new career marks for receptions and yards.

Vanderbilt head coach Derek Mason said his standout receiver came into the season nursing a minor hamstring injury and should continue to improve this fall with more experience and production.

“I definitely expect him to be a guy moving forward,” Mason said. “(Abdur-Rahman) has seen what the SEC looks like. He understands what the speed of the game is in this conference. Now what he’s got to do is make sure he gets the confidence of his young quarterback, because I think those guys have pretty good chemistry together.”

Abdur-Rahman credits his desire to continually improve with the lessons he learned from his mother, Jamese Swinney, who owned her own cleaning service for more than 15 years. A close-knit group of cousins helped mold Abdur-Rahman – who also excelled in swimming during his prep career – through his youth. 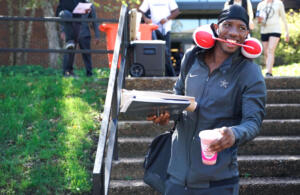 Now as a Vanderbilt junior majoring in medicine, health and society, Abdur-Rahman has aspirations of a career in the chiropractic or sports medicine industry. But before that he has some unfinished business – like breaking program receiving records, becoming the team’s leading receiver and guiding the Commodores to a win in a bowl game.

“My goal here is to change the environment,” he said. “I just need to keep bringing the energy that I have. I want to make an impact, not just for myself, but for my teammates so that they know that I did everything I could possibly do on the field.”