Alexander All About the Commodores

NASHVILLE, Tenn. — Tyrell Alexander never expected to play at Vanderbilt. He was not offered by the Commodores coming out of high school.

Five years later, Alexander made his way to West End as a graduate transfer from Oklahoma State, where he played his first four years of college football.

Being from Lancaster, Texas, Alexander is used to attending school close by – Stillwater, Oklahoma, is located only four and a half hours away from where Alexander went to high school.

Stepping out of his comfort zone, Alexander announced in mid-April his intention to attend school in Nashville. Arriving just in time for summer workouts to return, Alexander crafted his way to being poised for playing time.

Mainly used at Vanderbilt as a special teams and a wide receiver threat, Alexander has two special teams tackles this season. The three-time letter winner comes with experience playing offense, defense and special teams while in college.

With half the 2020 season still ahead of him and the possibility of coming back for a sixth year, Alexander is now only focused on the future.

He sat down with VUCommodores.com to talk about his transition to Vanderbilt, his college football experience, what side of the ball he likes to play the most and more:

VUCommodores.com: How did you find your way to Vanderbilt?
Alexander: “I found my way to Vanderbilt after having a nice, long conversation with coach (Tony) Ball. I was able to connect with him and I got a chance to see how much of an impact he has made on some of my peers and other players he has coached in the past. As I was narrowing down my options, Vanderbilt was one of few schools that would give me the best opportunity to further my education and to succeed on the football field.” 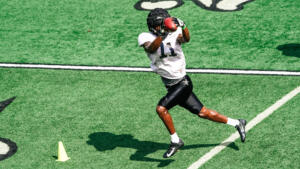 Have you seen a difference in style of play between the Big 12 and the SEC?
“SEC defenses definitely play way more man coverage than Big 12. The physicality is a little bit higher in the SEC. At the end of the day, it is football and everyone is good.”

In college, you have played both on offense as a wide receiver and defense as a cornerback. Which do you like better and why?
“I would say playing receiver is more fun for me. I like having the ball in my hands and I feel more comfortable playing receiver. Defense was fun, too, though. I like playing man coverage.”

What was it like being a transfer in the COVID-19 era without being able to go on visits?
“It was kind of weird not being able to go on visits due to COVID-19, but as a graduate transfer, I was focused more on relationships with the coaches and how I would be able to make an impact on the team. I was focused on figuring out how I can help the team win games. Now that I am here, I wish I could go around town and experience Nashville. But I will have to wait until COVID-19 dies down.” 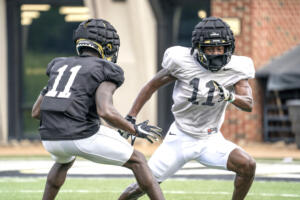 As a graduate transfer, how has your transition been?
“The transition has been different. There are a lot of things that I have had to adjust to, but I am finally getting in a good routine and things are going well. There have been two things that have been different for me thus far: Waking up at 4:30 a.m. for early morning practices was hard to adjust to – at Oklahoma State we had evening practices. Another thing that is different is having classes in the evening for three hours. Everything has been falling into place for me now and I am in a good flow.”

What are your plans for after Vanderbilt?
“After I am done with Vanderbilt I plan on training for the NFL and getting my LPC (licensed professional counselor) so I can become a mental health counselor. I want to make an impact on teens’ lives and help them be successful.”