SCOTTSDALE, Ariz. — On Wednesday evening, as the sun sunk behind the distant mountains, Vanderbilt head coach Scott Limbaugh made one last walk up the 18th fairway.

When the veteran leader reached the green his was greeted by wife, Kate, who met him with a long embrace. It was a walk Limbaugh had hoped to take under different circumstances.

Limbaugh’s Vanderbilt team was beaten by Texas in the semifinals of the NCAA Championships at the Grayhawk Golf Club in Arizona. It was a swift and sudden defeat in the oft-cruel match play portion of the championship event that annually decides the best golf team in the nation.

The Commodores thought – and perhaps still do think – that they were the best team in the country. Their six wins set a program record. They had the nation’s top freshman. They had two candidates for the Haskins Award, an honor given to the best collegiate golfer, and two first-team All-Americans.

But on this day Texas was a bit better on a few more holes.

“Right now I think this team deserves to be celebrated and I’m certainly proud to be their coach,” Limbaugh said. “I’ve got to keep getting better and we’ve got to keep learning and growing and that’s what we’re going to try to do.”

One could argue Vandy could not have been any better in 2022.

After struggling to put it all together in the fall season, the Commodores exploded in the spring with victories at The Prestige, the Cabo Collegiate, the Mason Rudolph and the Mossy Oak, respectively. They kept rolling into the SEC Championships and won both the stroke play and match play portion of that event.

At the Palm Beach Regional in Florida the Commodores ran away from the competition with a 12-stroke victory. On Monday they finished stroke play in Arizona atop the leaderboard with Oklahoma and North Carolina to enter match play as the No. 1 seed in an eight-team field.

It was all part of an unprecedented run by Limbaugh’s guys.

“That’s why I came back,” Vanderbilt fifth-year senior Harrison Ott said of his team’s successes. “It wasn’t necessarily a given, but I thought we’d be good with the guys who are on the team. I’m glad I did it.”

Even though the Commodores, Ott said, struggled with leadership and maturity in the fall, everyone in the program knew the wealth of the talent the lineup. Figuring out how put it altogether took longer than expected.

“I think it was just finding the leadership a little bit, almost rearranging it,” Ott said. “But I think through and through – you look at Gordon Sargent as a freshman, he’s one of the most mature people on our team. I’d like to think Reid (Davenport) and I bring some maturity as well.

“We got along well together. We knew we had to, but I think we genuinely liked spending time with each other.” 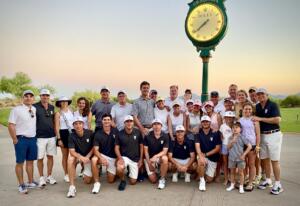 Ott, Davenport, Sargent, Cole Sherwood and William Moll wound up forming Vandy’s fearsome fivesome for the last few months. It was a group that consistently picked each other up with quality golf when one of their teammates may have had a rough day at the office.

All of those golfers, outside of Ott, plan to return to Vanderbilt for the 2022-23 season. That makes the expectation once again to return to Arizona for what would be the ninth straight trip to the NCAA Championships. Ott hopes his teammates cherish those types of opportunities before they’re gone.

“I can’t even put it into words. You don’t really understand it until you’re done,” he said of his time with the Commodoes. “I remember my sophomore year leaving (the 2019 NCAA Championships) and when Patrick (Martin) and Will (Gordon’s) career ended you think, ‘It’s OK and they handled it well.’ But it’s tough. You don’t realize until you’re done what it’s like.

“That’s kind of your job as an older person on the team, too, is trying to lock everyone back in and tell them some day it’s going to mean a lot to you.”

After beating Texas Tech on Tuesday morning, Vanderbilt needed to topple Texas for the right to face Arizona State for the national title Wednesday. But instead of being on the driving range Wednesday morning preparing for one last afternoon tee time, the Commodores were at the airport ready to make the somber trip home.

Returning to Arizona, however, was already on Davenport’s mind when the season ended Tuesday. He was asked what’s next?