A New Lea–der for the Commodores

NASHVILLE, Tenn. — Clark Lea is coming home. And those who know him best couldn’t be more excited.

“We, Vanderbilt, are very fortunate to have found the right window of time to hire a person who inherently complements the mission of the university,” Vanderbilt head baseball coach Tim Corbin said. “I am very happy for Candice, Chancellor Diermeier and Vanderbilt University that they were able to build a process that would produce this outcome. Furthermore, I am extremely happy for the current and future players as they will be guided by an adult who will challenge them in every facet of their collegiate life with extreme care.”

Lea, a 38-year old defensive coordinator at Notre Dame, was officially named the new head football coach at Vanderbilt on Monday. After more than 15 years away from his native Nashville, he has the opportunity come be a Commodore once again.

A winding road as a student-athlete and coach began in Birmingham, Alabama. It was there that after a standout career as a football and baseball player at Montgomery Bell Academy – two miles down the road from Vanderbilt Stadium – Lea began his collegiate baseball career for powerhouse Birmingham-Southern and helped the Panthers win an NAIA national championship in 2001.

Lea then transferred back home, but not to West End. He attended Belmont to play baseball instead. Lea appeared in five games for the Bruins in 2002, going 2-for-5 before his sophomore season ended.

At that point, the gridiron and the black and gold were tugging at his heartstrings. 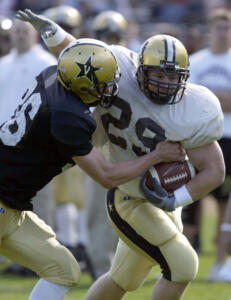 The 6-foot, 230-pound Lea was a bruising fullback who played 30 games for the Commodores and head coach Bobby Johnson. His 2003 season was statistically his best with three receptions for 39 yards and seven carries for 14 yards.

“A lot of these adjectives get overused, but as a player, Clark was popular and had an exceptional work ethic, doing whatever was needed every day to make himself, his teammates and the team better,” Johnson said. “His drive, energy, intelligence and leadership skills make him the perfect head coaching choice for Vanderbilt. The Vanderbilt football fans should be thrilled to welcome home this Commodore.”

Lea began his coaching career in 2006 as a graduate assistant at UCLA. From there he coached at South Dakota State, UCLA again, Bowling Green, Syracuse, Wake Forest and now Notre Dame.

For the past four seasons Lea has been an integral part in shaping the Notre Dame defense into what it is today.

“I’m so excited for Clark Lea and for Vanderbilt University,” former college football head coach and CBS college football analyst Rick Neuheisel said. “Clark’s love for his alma mater will serve him well as he goes out to attract the best and brightest to Nashville. He won’t have to sell them on Vandy, he’ll get to share it with them.

“Clark is absolutely ready for this challenge. He possesses all the qualities necessary for success. He is a great communicator. He is a great tactician. He has great organizational skills, a tireless work ethic and, most importantly, a passion for the game that is contagious. I look forward to watching the Commodores for years to come.”

Lea was promoted to defensive coordinator from linebacker coach in 2018 and, Saturday, will be on the sidelines when the second-ranked Fighting Irish face No. 4/3 Clemson in the Atlantic Coast Conference title game.

“Clark Lea has been an instrumental part of our success the last three years here at Notre Dame and he will be able to bring that same energy and relationship-driven philosophy to his alma mater,” Notre Dame head coach Brian Kelly said. “I look forward to watching Clark build a successful program and wish him only the best in the future.”

Lea’s list of statistical accomplishments is long and the list of young men he has mentored into on-field stars is even longer. Before the start of the 2020 season he had coached one All-American and 10 all-conference selections.

Those who have watched him work know it’s how he treats individuals off the field that has him positioned to take the next step in his professional career.

“In over 25 years of covering college football Clark Lea is one of the best coordinators I have been around,” said Mike Tirico of NBC. “His intelligence and football acumen are only surpassed by his leadership and exemplary personal skills. The way people gravitate to Clark shows in how his defenses play and how all who come in contact with him are inspired.

“He is a perfect fit for Vanderbilt and I’m thrilled to see him heading back home.” 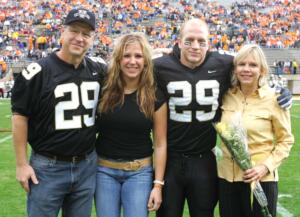 Said former NFL head coach Tony Dungy: “I am excited for Clark Lea and for Vanderbilt University. Clark is one of the most talented young coaches I have seen but, more importantly, he has a passion to develop his players as men as well as football players. I believe he will be very successful doing both at Vanderbilt.”

Lea will continue to coach the Notre Dame defense through at least Saturday’s title clash with Clemson (3 p.m. CT, ABC). After that he’ll begin to shift his focus toward Vanderbilt and what needs to happen to get the Commodores back into the win column – Vandy has lost 10 games in a row dating to 2019, is 3-18 in its last 21 contests and 5-28 against the SEC since 2017.

There’s a lot of faith from his peers and beyond that he’s the right coach for the job.

“Clark is principled in the components of a football program that matter,” Corbin said. “He is a tremendous teacher who models the behaviors of a consistent and genuine leader. He is unique because he is truly himself.

“He will develop a successful program because he acts with dignity, communicates with clarity, teaches with care and is mentally organized.” 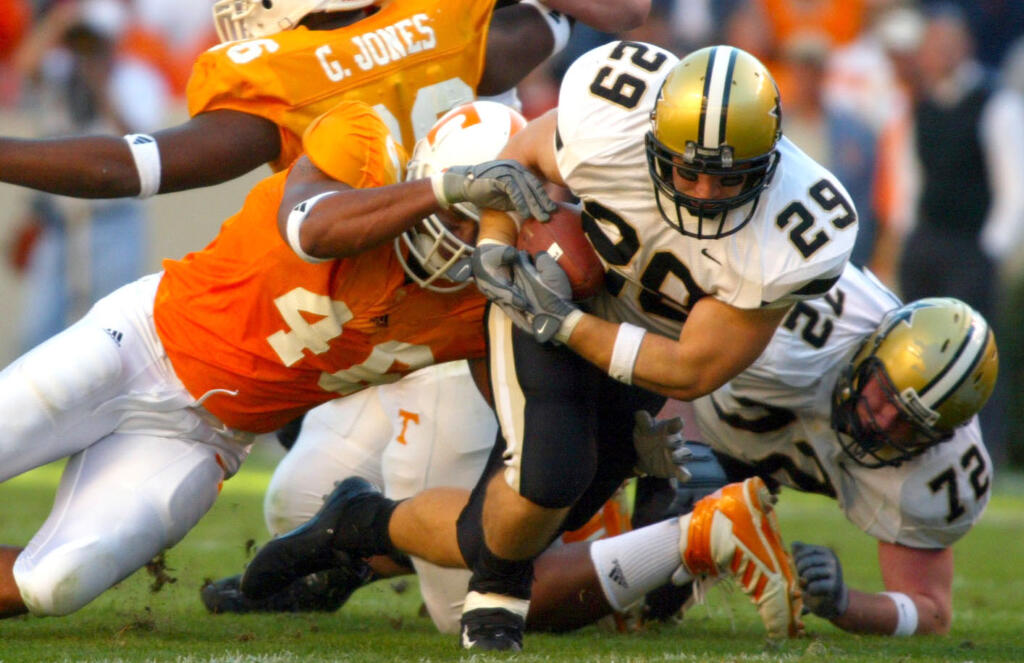