Wright QB for the Job

NASHVILLE, Tenn. — Vanderbilt junior Mike Wright has been the team’s starting quarterback since the start of summer workouts. It wasn’t until recently that that news became public knowledge.

Now the Atlanta native is tasked with the pressure of holding on to that starting job for the next three weeks leading up to the season-opener at Hawai’i on Aug. 27.

“For (Wright), it’s just about understanding that every day he’s got to earn it,” Vanderbilt head coach Clark Lea said. “Those other two guys that were here in the winter and spring, we’re not telling them, ‘Hey, you just be happy taking a back seat. This is where you are, this is what you need to do to get to where you want to go.’

“(Wright) has to continue to push himself, he has to lead from the front, he’s got to take on all the burdens that come with being a starting quarterback. We have to help him with that.”

The remainder of the 2021 season saw Wright as the team’s starting quarterback and he finished the campaign 93-for-175 passing for 1,042 yards with eight touchdowns and six interceptions. He goes into the 2022 slate still looking to record his first career win as a starter.

“We want him to develop as a total quarterback, which he has,” Lea said. “He has demonstrated leadership abilities, too. We’re excited for him to enter the fall as our starting quarterback. He knows that he has to earn that every day. That’s part of our covenant.”

While the starting quarterback position is Wright’s to surrender, fellow junior and current backup Ken Seals (6-3, 225) has spent most of his career as the starting signal caller for the Commodores. Before a hand injury sidelined him for the second half of 2021, Seals had played 15 games for Vandy and helped the team beat Colorado State and Connecticut last season. 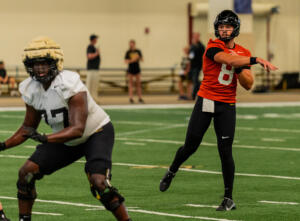 “I want to just give credit to Ken Seals because in an era right now where nine out of 10 times that player that is getting the disappointing news makes a choice to move on, Ken Seals set his jaw and made a determination that he was going to earn it every day,” Lea said about Seals starting the 2022 preseason as the backup quarterback. “What I’ve been proud of from the two of them, one of the challenges that I issued to them both, was we have to cease to compete for that spot alone and start to compete for the personality and identity of our team, meaning their position as leaders in our program is more important, the team success is more important than that battle between individuals.

“We can be great competitors on the field, and I expect that, I expect ruthless competition for that job every single day, but we have to be collaborators off the field.”

Along with Wright and Seals, true freshman AJ Swann (6-3, 225) has been with the program since the start of winter training in January and throughout spring and summer workouts. From Georgia, Swann threw for nearly 7,000 yards and totaled 65 touchdowns at Cherokee High School.

Swann, Wright and Seals have been joined this fall by freshmen Walter Taylor and Drew Dickey and sophomore Hayden Moses, a Grinnell College transfer, on the roster.

“You talk about smart guys and guys who are really, almost, college-ready as soon as they walked in the door as far as knowledge of the game. They’re a great addition to our quarterback room,” Wright said. “All three bring different personalities, funny as all get out. I’m excited to see them grow and they’re giving insight the same way the older guys are giving them insight now. I’m just glad to have them in our room.” 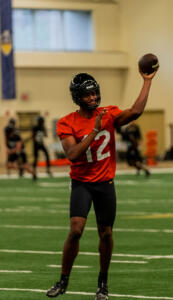 Wright’s best passing game in 2021 came at Mississippi where he totaled 241 yards and completed 22 balls. On the ground he rushed for 152 yards against Missouri in October – he also tossed three touchdown passes that game.

A star at Woodward Academy in Georgia, Wright racked up more than 3,300 yards of total offense in three seasons as a starting quarterback and accounted for 50 touchdowns as a senior. He had originally committed to play at Central Florida before opting to sign with Vanderbilt instead.

Now, two years later, he’s focused on becoming an even better quarterback and leading the Commodores to victory.

“Just going through last year and just focusing on things that I could clean up – relationships with receivers as far as timing routes, timing throws, communicating with the O-line. The elevation of the quarterback’s game. Naturally you’re going to grow as years go on,” he said of how he hopes to improve.. “Just spending a lot of time with coach (Joey) Lynch figuring out, ‘OK, what can we work on today?’ and having a plan and intentionality every single day on getting better.”