No matter how one arrives in Omaha, there is really only one way to leave: in a dogpile, scarred by grass stains, surrounded and smothered by two dozen of your best friends.

OMAHA, Neb. — No matter how one arrives in Omaha, there is really only one way to leave: in a dogpile, scarred by grass stains, surrounded and smothered by two dozen of your best friends.

This was the scene on Wednesday night at TD Ameritrade Park, where the Vanderbilt Commodores rushed the field in celebration of a reemergence.

As the final out was secured on a pop fly to Pat DeMarco in center field, catcher Philip Clarke threw off his mask and charged the mound to bear-hug reliever Jake Eder. By then, the Commodore dugout had emptied, a sea of gold that followed an eruption of cheers from Vanderbilt fans still seated in the stands.

The party didn’t stop at midfield, where the Dores donned NATIONAL CHAMPIONS T-shirts and hats as All-American third baseman Austin Martin hoisted the NCAA trophy above his head. Vanderbilt head coach Tim Corbin, already the recipient of a dozen-plus hugs and counting, finally made his way into the mosh-pit of players. With a crowd that included Vanderbilt athletics director Malcolm Turner and head football coach Derek Mason looking on, the Commodores lifted Corbin in the air, a wry smile appearing on their coach’s face.

He thrust a single finger into the air. Number one.

What’s not to love? After all, the Commodores are national champions once again. 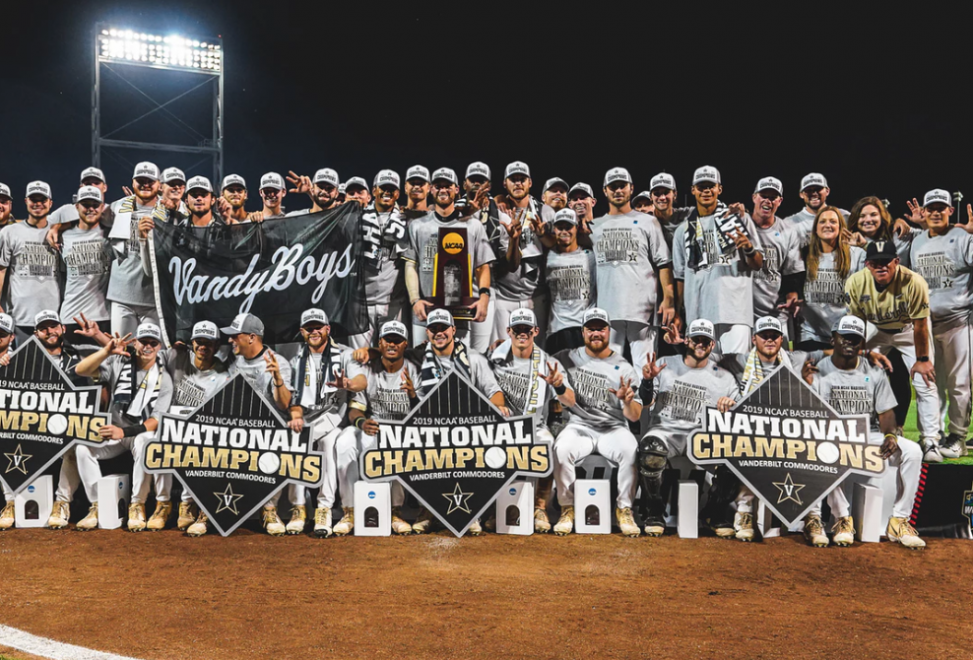 No. 2 seed Vanderbilt took the drama out of Game 3 of the College World Series finals with a convincing 8-2 victory over Michigan. Vandy used a strong outing from starter Mason Hickman and a rejuvenated effort at the plate to clinch its second NCAA championship in program history. The Commodores’ ascension in Omaha served as the final chapter to what became a record-breaking season in Nashville.

Vanderbilt head coach Tim Corbin, who led the Dores to their first NCAA title in 2014, nodded to his players when asked to describe the postgame scene.

Vanderbilt’s shot at a national title looked grim as recently as Monday, when Michigan claimed momentum with a 7-4 win in Game 1. That meant the Commodores had to win two straight in the best-of-three series to avoid elimination. Kumar Rocker helped the Commodores rebound with a 4-1 win in Game 2, with Hickman designated for work in Wednesday’s winner-take-all Game 3.

Unflinching from the start, the sophomore from Hendersonville, Tennessee, delivered. Hickman struck out 10 and walked just three while allowed four hits and only one earned run in six innings. Eder entered to fan four more batters in the final three frames.

Meanwhile, Vanderbilt’s bats woke up just in time. The Dores belted nine hits and took over the game with five combined runs in the third and fourth innings. The Wolverines were unable to maintain pace as the game progressed. 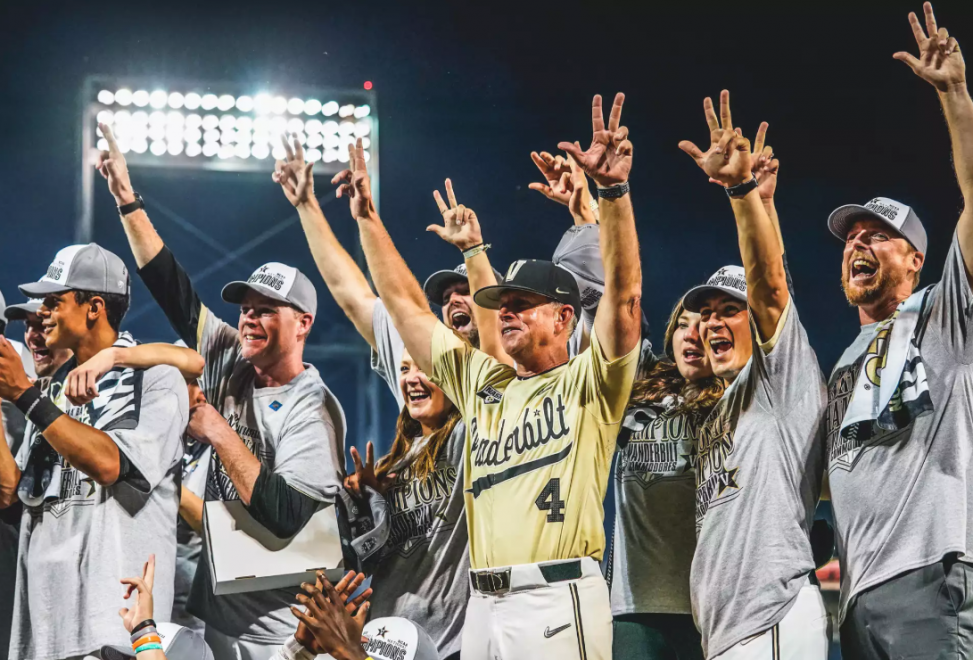 With the outcome long ago cemented on Wednesday night, Vanderbilt’s coaches, players and support staffers climbed atop a makeshift stage at home plate to officially receive their NCAA trophy. In reality, the Commodores had grown accustomed to a champions’ mindset this spring. They had claimed the SEC regular season and tournament titles for the first time since 2007. They had advanced past the NCAA Regional and Super Regional, both at Hawkins Field. Then Vanderbilt arrived in Omaha for the first time since 2015, only to maneuver its way through the College World Series bracket with just one loss.

The Dores said they did not let the spotlight of a preseason No. 1 ranking – and a No. 2 national seed in the postseason – distract from their ultimate goal.

“I thought we had the chance the whole season,” Hickman said, “to end up in this situation.”

"To this day, every time I look at Teddy, I think of Donny. I can speak for the seniors, but really the whole team — it was something we really wanted to do. They’re just as much a part of the team as we all are." – Ethan Paul#CWS | #VandyBoys pic.twitter.com/bn89kpIUkH

"I'm just happy for our team. I'm happy for the boys. It's fun to watch this thing come full-circle for them.

The moment in Omaha meant even more to Vanderbilt’s five-member senior class, the program’s largest since 2008. Paul, Walker Grisanti, Julian Infante, Patrick Raby and Stephen Scott each played roles in the Commodores’ latest title run, and they did so having endured a loss that reached far beyond baseball. In the spring of 2016, that group was shaken to its core when fellow freshman Donny Everett tragically drowned hours before that year’s NCAA Regional.

In the seasons since, Donny’s parents, Teddy and Susan Everett, have been mainstays around the Commodore program. That didn’t change in Omaha. On Wednesday, the Everetts were high atop the celebratory stage, embracing Vanderbilt’s players as they received their NCAA championship trophy. The Commodores said the Everetts’ attendance was no accident; in fact, it was motivation.

Those two mean so much to this program and all the players and the seniors. I mean, to this day every time I look at Teddy I think of Donny, and just being able to share that moment with them was something that I think -- I can speak for the seniors, but probably the whole team, is something that we've all really wanted to do. This team is so special for so many reasons, but we're all genuinely -- we all care about each other, and they're just as much a part of the team as we all are. 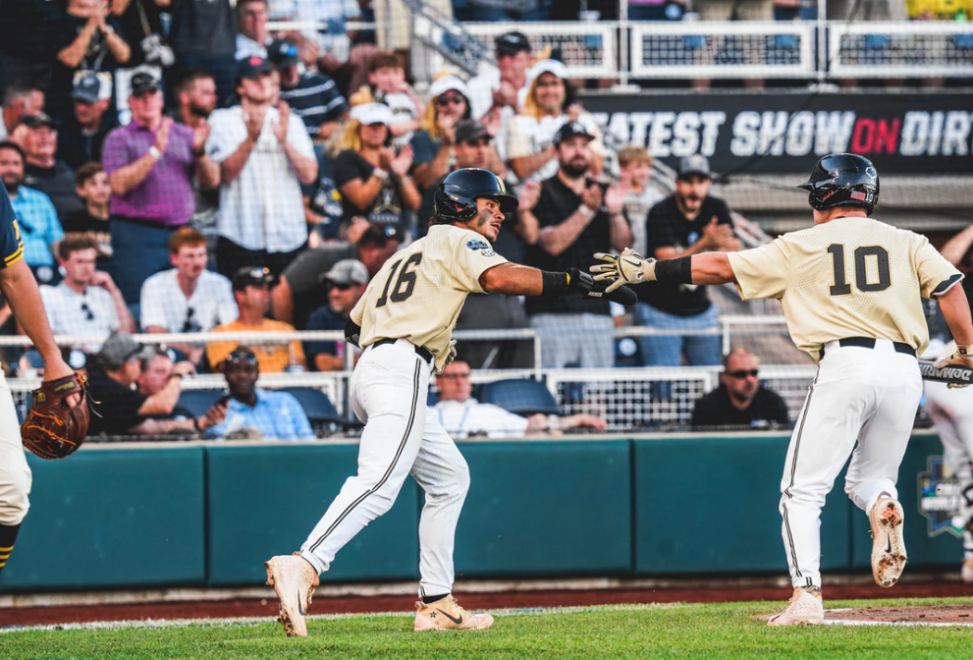 Corbin has always held a special place in his heart for seniors. This group, he said, won a national championship as a case study in perseverance. In truth, a mix of old – a seasoned senior class – and new – a rock-solid freshman in Rocker – is what combined to lead Vanderbilt to the title. But it’s the Commodore seniors whose legacies won’t be forgotten after this trip to Omaha, Corbin said.

“They played with heavy hearts for a long period of time, and the program didn’t feel right for a time, and rightly so,” Corbin said. “… As time went on, we never talked about championships, we didn’t talk about winning the SEC, we didn’t talk about winning a regional, we just stayed very localized in their thinking, and I attribute that to the older kids. That situation callused their brain, and because they did that, it allowed them to get closer to maturity than maybe if that didn’t happen.

“I hate to say there’s any positive thing from losing a young person, but certainly there’s experiences that you gain from that that allow you to grow individually and as a group. And we did that.”