NASHVILLE, Tenn. — From time to time, Raashaan Wilkins takes a moment to look back at where he came from. But it’s his unwavering faith in the promise of the future that led him on a gridiron odyssey in the first place.

“Since I still feel like I could be able to push so much further, I haven’t been able to truly look back and say, ‘OK, here is all that I’ve done,’ and appreciate it,” Wilkins said. “I look back at it just to remind myself where I began and if I keep working, to where I can go.”

When Wilkins puts on the pads Saturday for Vanderbilt’s matchup with No. 10 Ole Miss (6:30 p.m., SEC Network) he’ll play his 20th game for the Commodores. The senior is listed as a starter at defensive tackle, not an insignificant part of the story given where he was four years ago.

Taking the Bus From Bronzeville

Unlike many of his childhood friends, Wilkins wasn’t initially enamored with athletics.

He dabbled in soccer and played some basketball, but he didn’t step on the football field competitively until his freshman year of high school. And then only at the urging of best friend Antwon Anthony.

At that time, Wilkins was a 6-foot-2, 180-pound wide receiver taking the No. 4 bus from his home in the Bronzeville neighborhood on the south side of Chicago to nearby Mount Carmel High School. The private school had awarded him an academic scholarship after he completed middle school, but he soon lost it as a result of not taking academics seriously enough.

Kristen Wilkins, who was already working two jobs to support Raashaan and his two brothers, began to work weekends as well to pay for her son’s private education.

“Instead of just transferring out, which at the time I wanted to do, she just picked up another job and started working more so I could stay at Mount Carmel,” Wilkins said. “That kind of made me realize the importance of school work and knowing how much my mom actually cared about my education. That kind of changed my whole outlook on life.”

Meanwhile, Wilkins began to grow — not necessarily up but out. He moved from receiver to outside linebacker, fullback and tight end and became a key member of Mount Carmel teams that went 8-5 in 2016 and 10-4 in 2017.

Wilkins started to receive interest from Division III programs like Wisconsin-Whitewater, Wisconsin-La Crosse and Wisconsin-Stevens Point. He ultimately chose the third, thinking a career with the Pointers gave him the best opportunity to make an impact as a tight end.

And he was right.

Wilkins, by then standing at 6-foot-3, 243 pounds, impressed in fall camp as a freshman and earned a starting spot going into the 2018 season. He played in Stevens Point’s first two games and even recorded two receptions, but an ankle sprain sidelined him for the remainder of the season. He knew a medical redshirt was a possibility, but he also started to listen to his best friend’s plan of playing junior college football and what that could mean long term.

Again at Anthony’s urging, Wilkins was about to take a leap of faith that would alter his future.

Making a Way in Monterey

His mother was not thrilled about her son’s plan to leave Stevens Point and move across the country to enroll at Monterey Peninsula College, a community college in California.

But Wilkins believed that he had a shot to make yet another position switch and eventually become an impactful defensive tackle at college football’s highest level.

“My first impression was this was clearly a very mature kid,” said Kyle Warren, a Monterey Peninsula defensive coach at the time. “Obviously, the first day showing up, I didn’t know much about his home life. But I could tell that someone in his home influenced him to be focused and to be driven, to be goal-oriented.

“As far as football goes, I was impressed with his willingness as a young man to bet on himself, to take that risk, to go somewhere far away from home and to believe in us (as coaches). I thought it was really, really inspiring to see the way that he willing to bet on his work ethic, willing to bet that this was something that he could achieve, that he could work his way into it.”

The plan worked swimmingly on the field. Wilkins played 10 games for the Lobos in 2019 and made 44 tackles (14 for a loss), recorded eight and 1/2 sacks, forced a fumble and recovered a fumble. Life off the field as a student was not nearly as easy.

Wilkins’ housing plans fell through when he arrived in California, leaving him reliant on teammates and coaches for couches — and sometimes even cars — in order to have a place to sleep. When he finally found an available rental house, the price was almost too steep for he and his roommates to afford.

Wilkins took on the responsibility of managing the money, trying to make sure utility bills and rent were paid on time. Despite those efforts, he learned shortly before the end of the semester that the electric bill had gone unpaid.  Day after day for the remainder of the semester, he woke up and went to class, then spent the rest of the day in the library doing homework and sending out game film to Division I programs before finally coming home to take a cold shower and go to sleep. 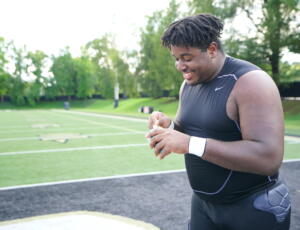 “He kind of ended up being the father of the house or maybe the leader of the house. He took on that role with most of the guys,” said Warren, who now coaches high school football in Houston. “Part of it was just learning how to fight through some things. Never a complaint to be heard about what Raashaan was going through. He was lending a hand to his teammates, but I knew for a fact there were nights where he would just get a little something to eat during the day before going to class and football practice. I would get mad at him for not coming to me for help.

“It was just within him that he didn’t want to impose his problems on other people, he wanted to find a way to make it for himself.”

Luckily for Wilkins, his highlight reel caught the eyes of coaches at Hawaii, Prairie View, Duquesne, Memphis and, of course, Vanderbilt. Defensive line coach Jovan Haye and Kristen Wilkins instantly hit it off as native Jamaicans. And by February 2020, an ever-growing 6-foot-3, 300-pound Raashaan Wilkins signed with the Commodores.

How it started and YES I have surely enjoyed the journey to Vandy D3->JUCO->SEC #JUCOPRODUCT #V4L Yes my heart is full! Time for the #BLACKOUT #SENIORNIGHT pic.twitter.com/UatacyL6Ft

Steve Albert teaches economics and social science at Monterey Peninsula College. Wilkins took one of his classes in 2019, and although he comprehended much of what was being taught, he admits he was struggling to make the grade.

He went to Albert for help. The information began to stick. Wilkins is now working toward a degree in economics at Vanderbilt. 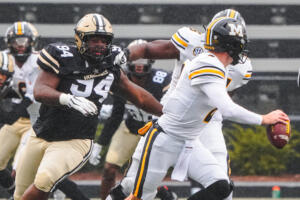 His father, Raashaan Wilkins Sr., always told his son, “If you don’t work, you don’t eat,” and that’s a motto Wilkins has lived by throughout his remarkable journey.

“He’s great. He’s a great student, a great person,” Albert said. “I knew he was going to be one of my better students right away. I saw how attentive he was and how interested he was in class. He asked great questions. I just remember his notebook was spectacular. It was very good, and all of that got reflected on on his exams.

“But I think the best part of Raashaan is he’s just a genuine person that was genuinely interested in learning and genuinely there while I was working with him in economics. I can’t say enough good things about Raashaan.”

As for football, Wilkins has 17 tackles — two for a loss — so far as a Commodore.

Wilkins has at least one year of eligibility remaining, and it’s possible he could be awarded a second stemming from his Stevens Point injury. First, he has two games left this season.

“That was of my favorite moments in his recruitment, when he chose Vanderbilt, because of the academic rigor and what it meant for his future and the network that would be opening up to him,” said Warren, his former coach. “That was something that was really important to me and his mom as we were helping him with his decision.

“I’m really proud of him. I think that he showed up with his goal in mind, and I knew that as long as he had the right people around him he could achieve anything he wanted to.” 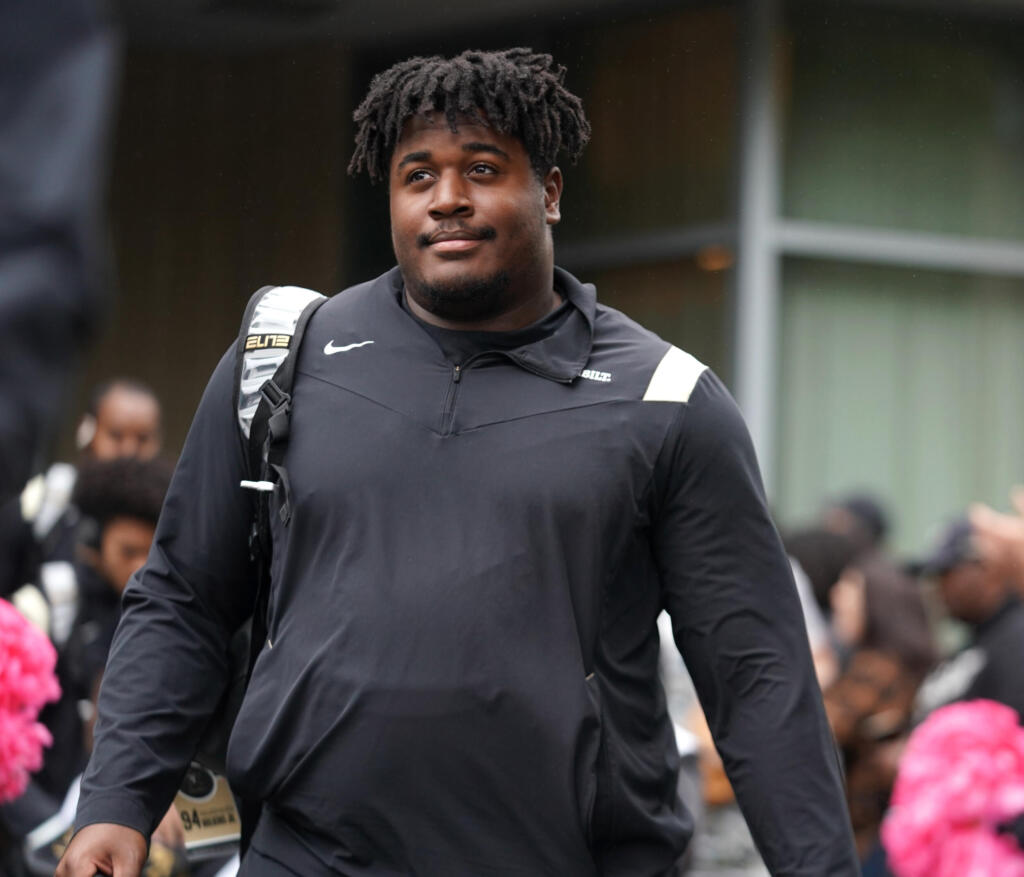