Ballard, Hedgepath and Varano ready to make impact for 2022-23 season

Vanderbilt head coach John Williamson has announced that Alyssa Ballard of Keller, Texas, Jenna Hedgepath of Nashville and Victoria Varano of Stony Point, New York, will be enrolling at Vanderbilt this fall, culminating a highly competitive recruiting process.
“We work hard to identify and evaluate the top junior bowlers in the nation,” Williamson said. “We not only pay attention to their success on the lanes, we like to see quality academic achievement and young women who have demonstrated they are contributors in their communities. This class meets all of those markers and we are looking forward to their arrival on campus. They are a good fit for our university and bowling team and have bright futures awaiting them.” 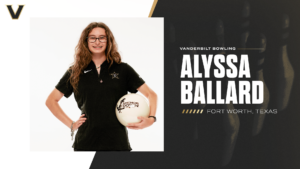 Ballard was one of the nation’s most highly sought-after preps. She has compiled a deep bowling resume, competing successfully all across the country. She is the daughter of professional bowling Hall of Famers Del and Carolyn-Dorin Ballard who have won 35 professional tournaments between them. She carries a family history of bowling excellence.
Alyssa Ballard and her mother just combined to win the PBA King of the Lanes event earlier this month, taking the championship as the only mother-daughter entry in the otherwise field of males. She has been a consistent high placer at the Junior Gold, qualifying sixth last summer in the U-18 field. She is a member of Junior Team USA.
Ballard has a wealth of community service activities, including her family’s Ballard vs The Big C Foundation that raises funds to support cancer patients. She compiled a 3.59 grade point and was an active member of the Future Business Leaders of America.
Hedgepath becomes a historical figure as the first native Nashvillian recruited to the Vanderbilt bowling roster in the 18 years of the program. Many regard her as the top female junior bowler in the city’s history. 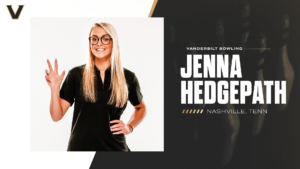 Hedgepath is a three-time Tennessee Bowler of the Year and twice was named the Girl’s Bowler of the Year by the Tennessean newspaper. She won a pair of Tennessee Division 2 high school state championships at Lipscomb Academy where she was honored at the Female Athlete of the Year, significant at a school well known for its athletic success.
Hedgepath finished in the top five at the 2021 Teen Masters, was a Storm Youth champion and won multiple Tennessee Road to the Golds and state-run events. Academically she is a member of the National Honor Society and graduated in just three years by taking a dual enrollment route combining regular high school classes with Advanced Placement courses.
Varano also has a history-laden family connection as she is the sister of two-time NCAA Player of the Year and professional star Danielle McEwan. She has blazed her own bowling trail, including her very recent selection on the four-woman USA Junior team (that includes Commodores Mabel Cummins and Paige Peters) that has traveled to Sweden for the Junior World Championships to be held June 20-29.
Varano is a member of the Junior Team USA, a four-time Storm Youth Championship winner and the PBA Northeast Regional champion. She won the 22nd annual Parker Bohn III Scholarship Tournament of Champions. She placed second at last summer’s Junior Gold in the U-18 division and was also second at the PBA Junior National Championships. She is a staff member of the Storm Evolution. 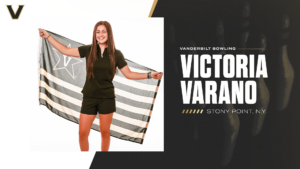 Varano is nearly as accomplished in the classroom, graduating in the top five percent of her class, is a National Honor Society member and a member of the English, Social Studies, Science, Math and World Language Honor Societies.
The trio will join a Vanderbilt team that returns the nucleus of last year’s NCAA third-place finisher.
Powered by