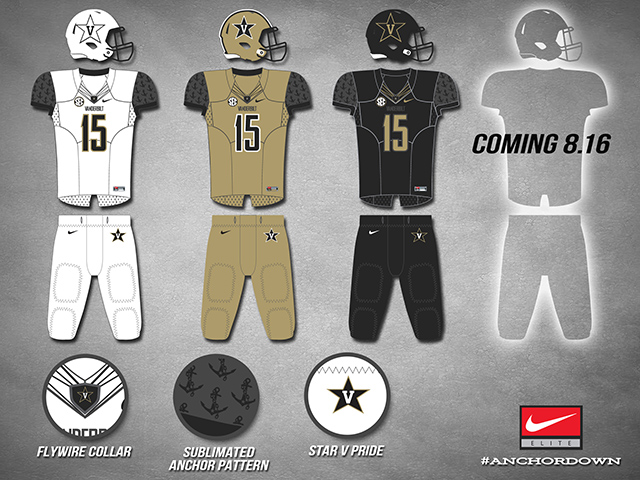 On campus in Nashville — Vanderbilt fans attending the program’s annual Dore Jam fan day activity this Sunday are in for quite a surprise — the official unveil of an alternative uniform design for the Commodore football squad.

The uniform combination — a unique alternative produced by NIKE — will be among the featured activities at Dore Jam, the Vanderbilt fan activity that opens Sunday at 2 p.m., in the on-campus indoor multipurpose facility.

Dore Jam is a free event, annually attracts thousands of Commodore fans to campus for an afternoon of autographs, photographs and family fun. It continues to 4 p.m. Vanderbilt’s entire football roster will join second-year Head Coach Derek Mason and the Commodore coaching staff at the event, offering fans a chance to greet their favorite student-athletes and coaches.

The alternative uniform — held under wraps for months by the the program — will be unveiled during the first hour of Dore Jam. Two of the team’s three traditional uniforms — all white and all gold combinations — also will be on display, with members of the squad wearing the official black jersey. The team’s new black and white matte finish helmets also will be displayed.

“Commodore fans are going to want to be there for the uniform unveiling,” Mason said. “I’ll just say it’s a completely unique uniform combination, top to bottom, one that I think will create excitement with our players, staff, Vanderbilt fans and recruits.”

New football posters designed for the event will be distributed free of charge at the entrance of Dore Jam. The event, which moved indoors last year, also features inflatable activities and interactive games for kids, along with free hot dogs and drinks while supplies last.

Other varsity sports, including the Vanderbilt women’s soccer team, also will be on hand to greet and interact with young Commodore fans.

Free parking for the event is available in the Vanderbilt Medical Center surface lots located across Natchez Trace from the Vanderbilt Track & Field Complex.

Vanderbilt opens the 2015 season playing host to Western Kentucky on Thursday, Sept. 3. Kickoff is 7 p.m. CT. It is the first of six games on the Commodores’ home schedule.