"I'm speechless. This is exactly what I imagined."

Seven months ago, Vanderbilt tight end Cody Markel set out to honor his late roommate and teammate Turner Cockrell, who had passed away after a battle with cancer.

Yesterday at Vanderbilt Children’s Hospital, Markel saw his vision come to life, a vision that included sights not normally associated with either hospitals or college football: plenty of glitter, stickers and glue guns, and giggling children running around in colorful, personalized superhero capes.

But according to Cockrell’s parents, Markel could not have devised a more perfect way to honor their son. The cape-decorating event Markel had organized was fitting, they said, not only because the kids and parents at the Children’s Hospital were able to enjoy an escape, but because of Cockrell’s lifelong passion for superheroes.

This was no one-time party, but the first event for the “Turner’s Heroes” nonprofit organization Markel worked diligently to establish as a tribute to Cockrell.

“I’m speechless. This is exactly what I imagined,” said Markel, a rising senior from Middleton, Wisconsin, who is majoring in political science and medicine, health and society and is a two-time SEC Academic Honor Roll honoree. “I had a mom tell me she’s been here for 18 days and it was so nice to get out of the room and come down here for an hour and just have fun. After Turner’s death, I didn’t really know what to do. It was a numb feeling. Throughout those months, I was wondering what I could do to honor him. I wanted it to hit me. Eventually it did hit me that this was the way forward and something he would really love. This is not just a means of escape for these kids, it’s a means of escape for me.” 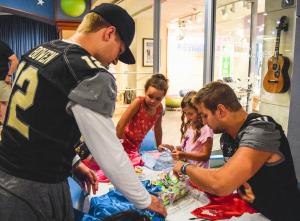 Markel said the mission of Turner’s Heroes is three-fold: 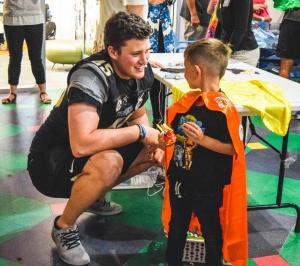 Cockrell enrolled at Vanderbilt in the fall of 2016 as a medicine, health and society major and a tight end on the football team. During his sophomore year, two cancerous lumps were discovered on his neck and he underwent surgery to remove them. His first day of class during the spring semester was also his first day of radiation treatment and he hardly missed a class all semester. Unfortunately, later that summer a full body scan revealed the cancer had spread throughout his body. He underwent immunotherapy treatment at Vanderbilt’s Ingram Cancer Center and was selected to undergo an experimental treatment at MD Anderson Cancer Center in Houston. Before he could complete the trial, however, he passed away at age 21 on Nov. 29, 2018.

Cockrell’s parents, Randy and Noelle, drove up from Acworth, Georgia, to attend Thursday’s event at the Children’s Hospital, and they said they wouldn’t have missed it for the world. They said they have felt nothing but love from head coach Derek Mason, the student-athletes and athletic department staff during a very difficult period in their lives. Noelle said her heart was touched by the “smiles and laughter” of the children as they created their capes. Bringing them a little bit of sunshine, she said, was a wonderful thing Markel had done. 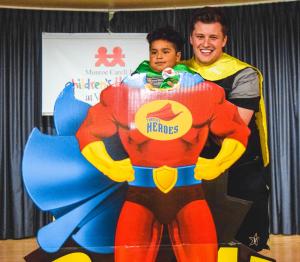 “They say things happen for a reason and God has a master plan,” said Randy Cockrell. “Turner came to Vanderbilt for a reason, and this is all part of it right here.”

Jason Grooms, Vanderbilt’s assistant athletic director for football, attended the event and said part of him was deeply impressed with Markel’s ability to envision, organize and launch a nonprofit on top of his commitments as a student and athlete. But part of him, he said, wasn’t surprised at all. “Honestly,” he said, “it’s par for the course with the kind of kids we have. They’re just phenomenal people. They love their teammates, they love Vanderbilt, they love the community. It’s exciting to see.”

Vanderbilt quarterback Deuce Wallace participated in Thursday’s event and said it was an emotional experience. “Turner was a light,” he said. “He was a great dude, and we miss him. I’m super proud of Cody. He had a vision, and now look at this. It’s incredible.”

Lily Williams thought she was done with sports when she graduated. Five years later, she's racing in the Olympics.