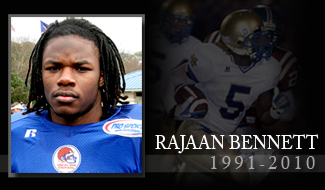 How to Contribute to Funeral Fund for Rajaan Bennett

Bennett, the son of Narjaketha Bennett and the late Charles Bennett, was the victim of an apparent murder-suicide in his north Georgia residence.

“All of us at Vanderbilt are devastated by news of Rajaan’s death. This is just so tragic to everybody that knew and loved Rajaan,” Johnson said. “Initially, our thoughts and prayers are with his mother Narjaketha and family members. I know he meant so much to them.

“Rajaan was an extraordinary young man and an ideal fit for Vanderbilt University. As we got to know Rajaan, it became very clear to our coaches that he was a better person than he was an athlete. He was a leader, a young man who gained the respect of the entire community at McEachern High School,” Johnson added.

A native of Fort Lauderdale, Fla., Bennett became one of Georgia’s most highly decorated seniors in 2009, earning the state’s AAAAA Offensive Player of the Year while leading McEachern to an undefeated regular season. As a first team AAAAA All-State tailback, Bennett rushed for 1,857 yards and 28 touchdowns this season.

Off the field, Bennett was regarded as a young leader in the McEachern and Powder Springs communities, active in school and Fellowship of Christian Athletes activities.

“I’m sure you want to talk about Rajaan on the football field, but I promise he’s a better person than he is player,” Hockman said. “He has a great head on his shoulders, a guy that has been the man in his household for quite a while, yet still worked to maintain a solid GPA in class and become such a great player.

“Rajaan is both humble and hard working. He’s a guy that is very respected by his teammates and the McEachern community. I think the world of this young man,” the McEachern coach added.