NASHVILLE, Tenn. — It’s a bit rare for three student-athletes from the same high school to play alongside each other at the next level. It may be even more rare for such a trio to all play in the same position group.

Redshirt junior Grant Miller, redshirt sophomore Tyler Steen and redshirt freshman Julian Hernandez all graduated from St. Thomas Aquinas High School in south Florida. Yet because of their age differences, the three never actually stepped on the field together at the same time.

That could change the next time the Commodores play a football game. It’s no surprise to Hernandez that he, Miller and Steen all ended up in Nashville.

“Coming from St. Thomas we’ve all always had the same core values – faith, family, tradition and excellence – engraved in our minds,” he said. “So it makes sense we all chose Vanderbilt.”

Hernandez, a 6-foot-4, 310-pound guard, explained how Miller contacted both Hernandez and Steen after the global pandemic COVID-19 ended spring practice in March. Knowing that Hernandez and Steen lived close by, Miller suggested the trio work out together when possible and safe to do so.

So for the last few weeks, the three St. Thomas Aquinas graduates have been building a tight bond. It’s a testament to Miller’s leadership, said Hernandez.

“As a leader and as a football player, (Miller’s) the man. I look at him as an inspiration,” he said. “He’s always pushing himself every day, in conditioning he’s always first, he’s got great numbers in the weight room – he may not be the strongest person on the field but he’ll give everything he has and he’ll play with our motto – relentless, tough and intelligent.

“He very much represents the relentlessness and toughness when it comes to offensive line and he knows the playbook like the back of his hand.” 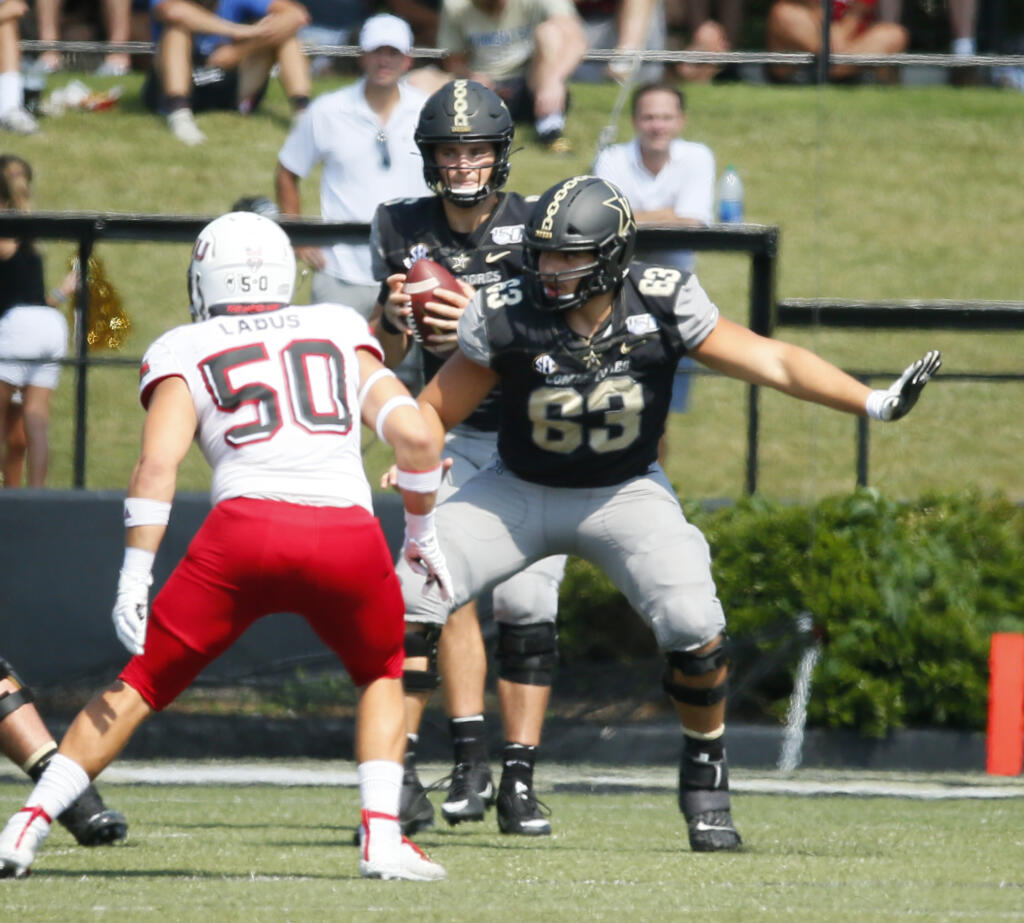 A 6-foot-4, 305-pounder, Miller started seven of the 10 games he played in 2019 at center after appearing in 12 contests in 2018. He echoed the offseason sentiment of new Vanderbilt offensive line coach Pete Rossomando that camaraderie will be key for the Vandy offensive line group moving forward.

That was a big part of the motivation to take it upon himself to bring the three south Florida linemen together.

“Everybody was kind of struggling to find places to work out and everything like that,” Miller said. “Before everything closed down I had a place that I was working out at and I hit them up and said it’d be great if all three of us could go and work out together, that way we’re kind of holding each other accountable.

“I think for a lot of guys and a lot of people it’s easier when you’re working with your teammates as opposed to just having to go out by yourself, especially when it comes to the field work stuff.”

Miller said he and his teammates tried to get together whenever possible and also tried to include on-field workouts.

The group also spent a lot of time talking about their mindset going into a next season.

“We really just want to improve in everything,” Steen said. “We just want to make sure everyone is on the same page and we want to take a couple big steps forward and really improve as a unit.”

Before a possible return to campus, the trio stayed in touch with the rest of the program through Zoom meetings, FaceTime calls and group texts. And one point that Miller consistently drives home is that none of the current circumstances should be used as an excuse.

He wants the Commodores to return better than ever.

“I think our mindset right now is we know this is a tough time that everyone is going through, but we want to be the ones to know that we out-worked everybody else in the country or the SEC and that we stayed on top of our assignments, whether that’s in the classroom or in the meeting room,” he said. “We’re not going to let the COVID-19 situation be an excuse for us to have a lackluster season.

“If anything we want to view this as a good thing. It’s an advantage that we can take because I think this year more than ever it’s really going to be about who wanted it in the offseason. The coaches say over and over again, ‘Football games aren’t won in the fall, they’re won in the summer and they’re won in the spring.’ So especially with everybody going through all this we don’t want to look at this just as an excuse not to get the work done that we need to get done. We’re going to focus and outwork the competition so that we can come out and have a good season.”