NASHVILLE, Tenn. — When Vanderbilt football student-athletes were given the opportunity to put words on the back of their respective helmets for the 2020 season, Dayo Odeyingbo knew there was only one choice as to what to put on his headgear.

Odeyingbo, a senior defensive end, is paying tribute this season to Osia Lewis with the words #LewisStrong on his helmet. A former Vanderbilt defensive analyst and outside linebackers coach, Lewis died May 31 after a lengthy battle with cancer.

“Really just one of the toughest people I ever met,” Odeyingbo said. “Having him as a coach and the mentor that he was to me here definitely has had a big impact on what my work ethic is – and it really made me grow up.”

Odeyingbo was a self-described immature 17-year-old freshman in 2017 when he arrived in Nashville to play for the Commodores. It was then that he encountered Lewis whom Odeyingbo thought, at the time, was, “just a hard-ass coach.” 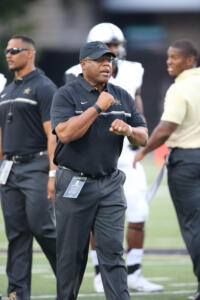 But as the days went by the student began to learn the importance of what the teacher was presenting. Odeyingbo became a meticulous notetaker during team meetings – following Lewis’ example – and started to recognize the importance of doing everything to the best of his ability.

“He always preached to me, one, about the details, the details of everything you’re doing regardless of what it is in life because those are the things that make you be great instead of good,” Odeyingbo said. “The finite details that most people don’t focus on are what separates the average from the above average.

Lewis touched innumerous lives during a coaching career that lasted more than 30 years. From Oregon State to Illinois to San Diego State and places in between, the former Oregon State linebacker was an honorable mention All-America selection, All-Pac 10 pick and team captain as a player in the 1980s.

Greg Hansen of the Arizona Daily Star remembered Lewis’ trade-mark smile and how Lewis had a yearning to one day finally move back to his hometown of Tucson, Arizona.

Dan Haley of HuskyMaven recalled a gray October day in 1985 when Lewis made more than 20 tackles in a shocking Oregon State upset win over Washington.

Vanderbilt head coach Derek Mason told The Tennessean in June that Lewis was, “A great family man. An outstanding father. A husband, a mentor, a man of God.” 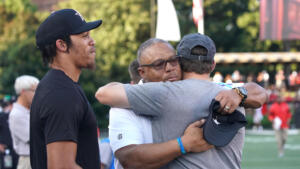 Lewis began to feel ill in 2016 and had been fighting liver cancer ever since. He never backed down from the struggle.

Odeyingbo recalled Lewis being at the McGugin Center every day at 5 a.m. ready to work. He remembers Lewis leaving film sessions or meetings to vomit only to return, pencil in hand, ready to take more notes.

On those cold November and December morning practices in seasons past, Lewis was there whether he was feeling 100 percent or whether he had just endured another brutal round of chemotherapy.

“Never complained and never showed any sign of weakness,” Odeyingbo said. “His dedication to this team and this game is really unmatched. It didn’t matter when we were having the roughest times in our season, he was going to be honest and be hard on us. Even if some people had given up on us, he was never going to give up on us.

“He could have been at home relaxing or spending time with his family, but he was up here every day – he was going to make sure he was here whenever he could be.” 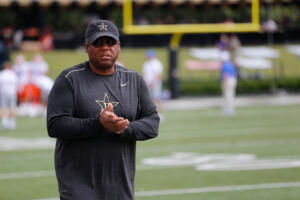 Lewis’ legacy will never be forgotten, especially by his wife Darlene, son Marvin and daughter Kiana, or by the hundreds of student-athletes like Odeyingbo that he impacted.

That’s why Odeyingbo wears #LewisStrong on his helmet. That’s why he continues to play in Lewis’ honor.

“He was always looking for ways for us to get better,” Odeyingbo said. “He was going to make sure he was doing everything to help this team. He really, really wanted us to be successful in everything we did.”